Fun fact, today is my last day of my futebol and linguagem class, so naturally, i should write about futebol to celebrate.

NU (short for Nossa Senhora, which is like saying Good Heavens) is the best way to describe watching a futebol game live in Brasil. You Badgers should be happy to know that we are almost just as crazy for football as brasileiros are crazy for futebol. The only difference is that they throw fireworks in the street and continue honking and setting off fireworks at least an hour after a victory. Also, vale a pena to mention that despite being a professional league, the torcedores brasileiros (brazilian soccer fans) provide their own music by forming their own tipo marching band.

Luckily, i got to experience first hand what i have been learning in my now finished futebol and linguagem matéria two Sundays ago at a Championship game between Porto Alegre’s Grêmio and Belo Horizonte’s own Cruzeiro. I’m sorry my fellow Belo Horizonteiros, but currently i am Cruzense as opposed to Atleticana. And here’s why: the uniformes atleticanos are what all referees wear in the US whereas the uniformes cruzeiros are bem parecidos com the United States because of its blue and white stars, so it touches my patriotic heart. However, seeing as i am not brasileira by sangue (but by coração), i don’t have a connection pessoal with either Atlético nem Cruzeiro. SO, depending on my mood i may become Atleticana, so be nice.

Anywho, i decided to take my roommate up on her offer to go to the Championship game because i normally don’t pay attention much during sports games, so i thought i might as well go big or go home just in case this is the only game i attend. It turns out, it was a good decision. Ironically, I was intrigued and gave my full undivided attention to those jogadores lindos, if you can believe that. Those of you who know me, i tend to pay more attention to Badger cheers than the actual game. Well, in this case, i had to pay attention to the game because i didn’t even know the Cruzeiro cheers.

The only downside to this match is that i had to pay a hefty 200 Reais to attend, but like i said, well worth it. Allow me to write a crônica futebolísitica (futebol chronicle) to put my futebol and linguagem class into practice as well as allow you to just picture this:

Finally, we are walking to the stadium and it was game day. The game is in Minheirão which is one of the biggest soccer stadiums in Brasil. On our way to the stadium, people are honking incessantly, impromptu churrascos or car churrascos are out and about as well as your classic South American informal economic vendors selling bandeiras and any type paraphernalia Cruzeira. Fireworks are goin’ off in the road, so i’m ficando de olho. 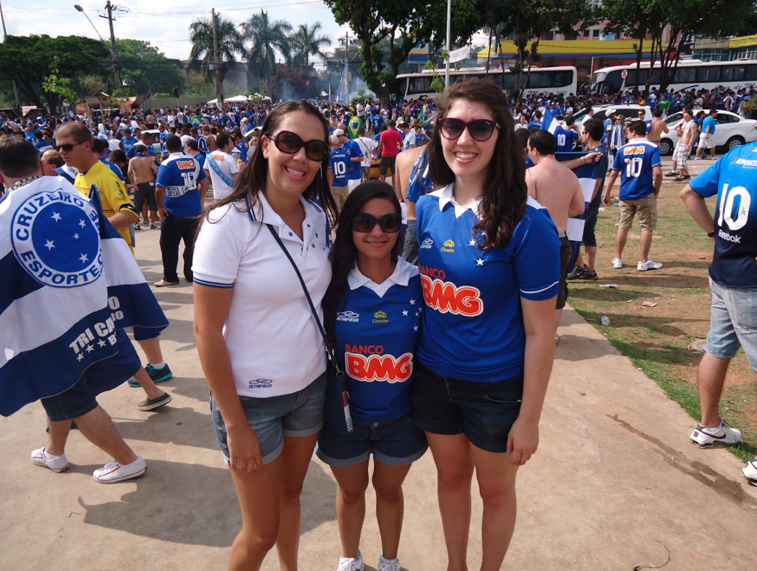 Rejane, Karol, and I posin’ in front of all the madness

Then, as we are entering the stadium, people are shouting, cheering, photo bombing, and just overall excited. As a foreigner, i can tell that futebol is huge part to being brasileiro, well at least for most brasileiros. It’s a time to bring your good friends together and celebrate your culture while watching your favorite team, *gasp* kinda like American football. 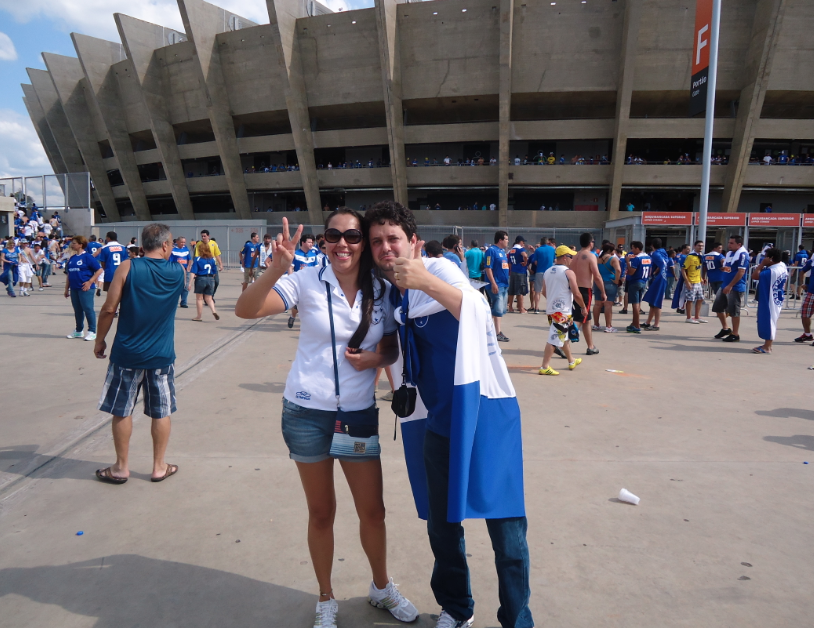 Once you enter the stadium, the mood is even more exciting. Fifty-eight thousand people in the stands sportin’ the blue and white colors of Cruzeiro. I mean, if you were to show up faltando Cruzeiro sportswear, you’re just a dumb do do bird [you’re welcome Joe bro]. Before the team comes out, there is a release of white and blue balloons which definitely romanticises the whole ordeal, but wonderful nonetheless.

To give you an idea of what the atmosphere is like: 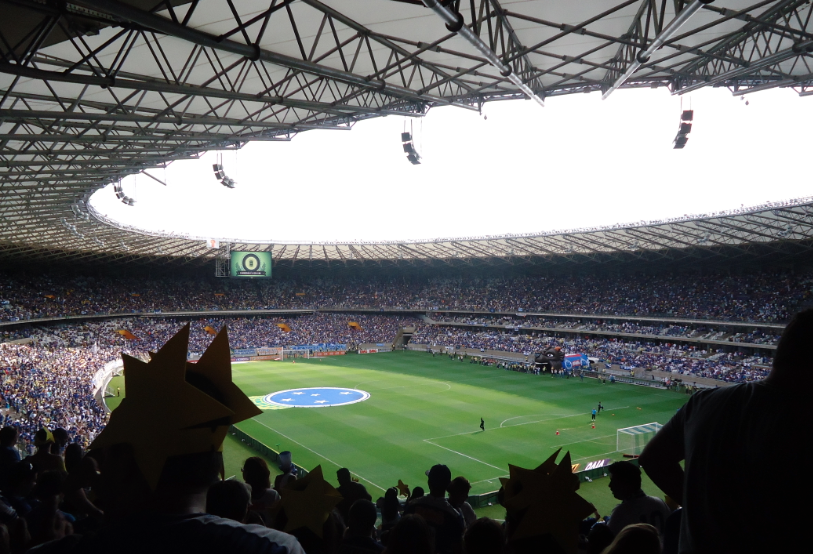 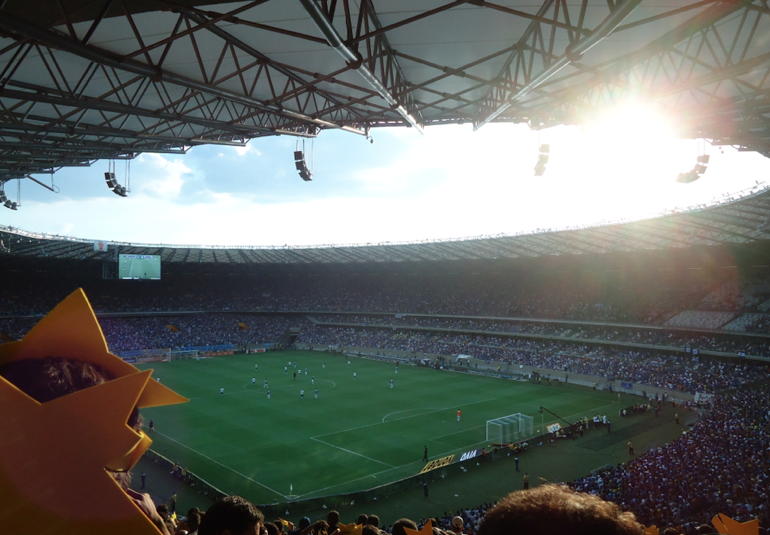 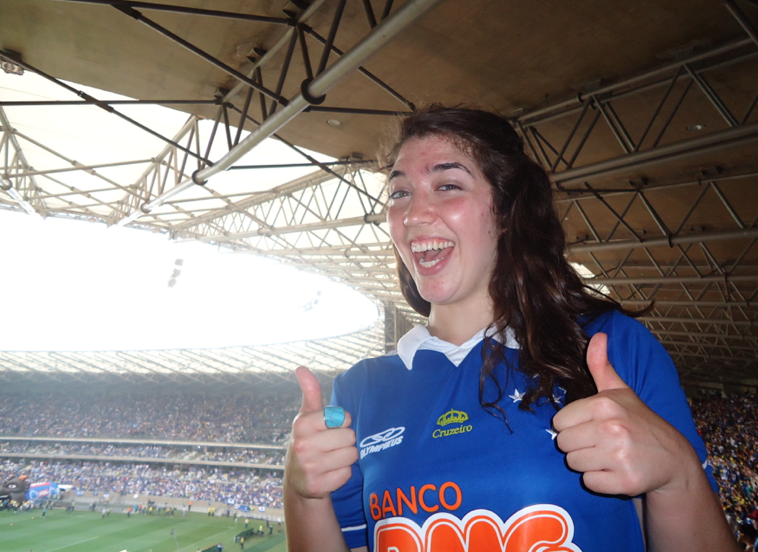 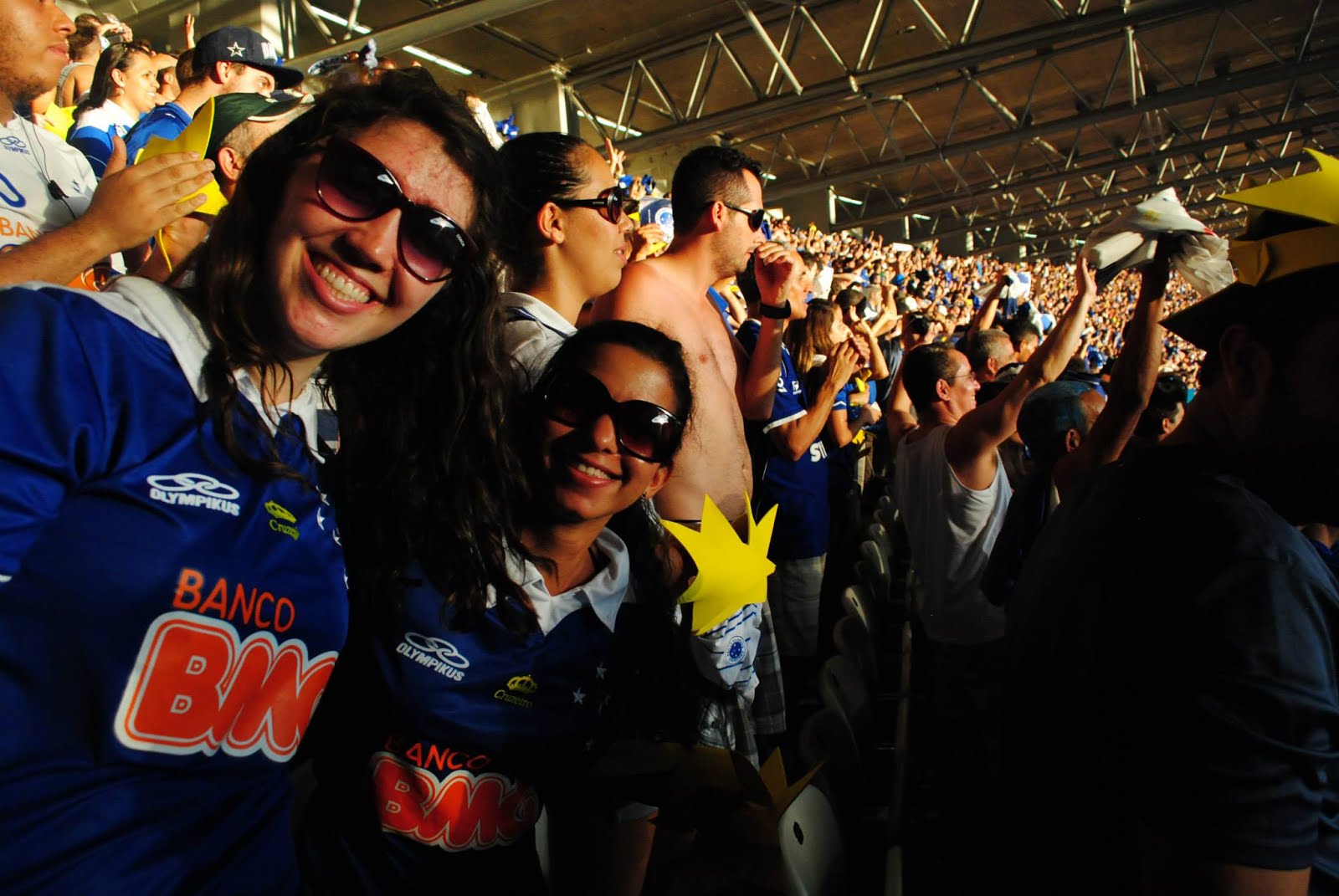 me and Karol surrounded by torcedores fanáticos (photo creds: Rodrigo)

ANNNNND THE GAME STARTS. Ball is on Grêmio’s side, Fábio, o goleiro, stops it with his mad skill. Cruzeiro brings it back to Grêmio’s side, almost makes a gol…Instead of being bummed, Brazilians give a loud hopeful cheer. Then, GOOOOOOOOOOOOOOOOOL. And i thought, cadê (where in the world) is that soccer dude’s voice that shouts Gol over the loudspeaker? But, it turns out there is no live commentator in the stadium for us espectadores. So after a Goooooool is made, the crowd goes haywire. Fireworks shoot from the top of the stadium, people jumping up and down for at least five minutes, and some soccer players go on their knees because Graças a Deus they made a gol.

Annnnnnd that’s my attempt to write a crônica…

And, gente, this Goooooooool happened three times!!!! Wooo those Cruzeiros had their head in the game. Then Cruzeiros were named Tri Campeão (not The Campeão), Tri-Champion, which is just super doida awesome. After celebrating for 10 minutes and waiting for the crowd to dwindle down, we were on our way back. Motorists with flags honking, cars wavin’ flags honking, and brasileiros just goin’ crazy, well Cruzeiros were for that matter.

I think what gets me the most is the fact is that it was the quickest and smoothest activity of my Brazilian immersion thus far. Out of all of the activities you can do in Brasil, futebol, for the most part, runs smoothly other than everything else. Another thing too is that people take their teams seriously much like Packers and Bears fans. My roommate, Gabriella, who is Atleticana has spent a lot of time hatin’ on Cruzeiros to convince me to join her and the other Atleticanos. Sei lá (who knows), if i’ll switch teams. All i got to say, is i want to go to a futebol game again because that was too much fun.

But for the mean time: Nós somos loucos. Somos Cruzeiro!!!