Before the Travel Blog Readings Begin:  I am so sorry for the delay on my summer break travels (#cameraproblems) BUT here they are. I decided to split them up into three blogs because ain’t nobody got time to read one huge novel. Lastly, i’m not writing about my travels así: first we went here, then we went there, and then we went here…BORING. Instead i wrote about three lessons i learned while traveling with fellow exchange student Eric, and also fellow American, Jake. I should also mention that instead of incorporating Português in these posts, i am incorporating Español because, well, I was in Argentina and Chile, and i gotta respect that (i am also obsessed with Spanish just as much as Portuguese).

Traveling is hard with other people.

This phrase: “we’ll take it as it comes” was a phrase that i repeated over and over for Eric to prevent him from being too determined our first day of hiking at Torres del Paine because he wanted to hike all the way to the free campsite. I, however, did not. So i kept saying, WE’LL TAKE IT AS IT COMES. As in, hopefully it will be thundering, lightning, such bad weather that we will HAVE to stop at the nice campsite that is only three to four hours into the first stretch…

I guess you could say that Eric and I had our differences while traveling together. We decided to travel together without knowing each other really well and it was overall a good time. Bueno, I don’t know what he got out of traveling specifically, but for me it was definitely a learning experience. a. k. a. you have to take it as it comes, always acostumarse, or adaptarse as one of our couchsurfing families stated many a time. (Couchsurfing is an online network of people willing to host travelers for free). Yes, it is free.

Traveling with another person can be frustrating no matter what because you often have to compromise. You can’t just up and leave and go wherever you want. Despite its challenges, i would do it again in a heartbeat. I definitely had a humbling experience because so often i would throw an attitude at Eric. So often i was overdramatic (even though i was kidding…) even though he didn’t get it (good thing i’m taking an acting class this semester to resolve that issue).

Our first half of our trip was not as adventurous as the second-half. During the first half, we always stayed in hostels and were a little too frivolous when it came to food and such. The second-half, on the other hand, we had the opportunity to get to know another American, Jake.

Jake is from Seattle, Washington, and should work in tourism allá porque he knows SO MUCH about his own state and even his city, Seattle, as well as where he goes to school. We also met Jake and his mochilero friend from Israel, Elay,  at Torres del Paine. In fact, we all did the W Trek together (one of the trails you can do is the four to five day W trek, or you can do the circuit which is twice as long).

And after we finished the trek, Jake ended up traveling with us towards Bariloche, in northern Patagonia. Talk about taking it as it comes because Eric and Jake are both a touch more adventurous than i was. I mean i thought I was an adventurous person, but after spending 10 days with these guys, nuh-uh.

But it was so good for me. I learned how to go with the flow more and i learned how to try to appreciate what i have. We ate so much crappy food and rarely stayed in hostels in order to economizar un poquito. At first i hated it, and i don’t even know why because when i look back, i would much rather prefer our second-half style of traveling.

It was no longer, let’s just throw money here and there and only stay in the hostels with 80 percent and above approval rating. Suddenly it became, let’s try and hitch hike a ride if we can. If not, maybe camp on the side of the road and eat unheated hot dogs (they kept reminding me that they were pre-cooked) in delicious or sometimes stale and not so delicious baked bread. Or let’s try and stay with a couchsurfing family, or, hell, let’s fit all three of us in Jake’s one person tent (not recommended by the way). And yes, we did attempt it once. It was too rough of a night’s sleep, so the next time we camped, i just slept outside the tent and surprisingly, slept fairly well.

Yeah, that’s just a little taste of what the second-half of our travels were like, and i wouldn’t change it for anything else.

Not only that, but Jake and i had some interesting debates that tested my faith. It was hard at first, and i didn’t like him for it at first, but i’m so grateful because normally we Americans don’t discuss topics that are so near and dear to our human selves. Not only that, but it gave me a chance to better explain what i believe and learn how to defend it. By no means am i on par with Jake’s debating skills, but that’s not to say i am not motivated to get there.

And with Jake around, Eric and i mellowed out so much, so thank you Jake! And let’s just keep in mind that roughing it for the most part made simple things like staying in a hostel or eating a cheap delicious steak that much more special.

En fin, i just want to thank Jake and Eric for allowing me to travel with them. I am sorry if i threw a little too much attitude at times, but unfortunately i have some human nature, so that complicates things. I am grateful for the experiences we shared like hitchhiking a ride on a truck bed filled with iron rods from Esquel to El Bolsón, or sleeping outside a bus station at four in the morning, or sleeping on a rocky beach because there was literally no other available hospedaje in Bariloche. 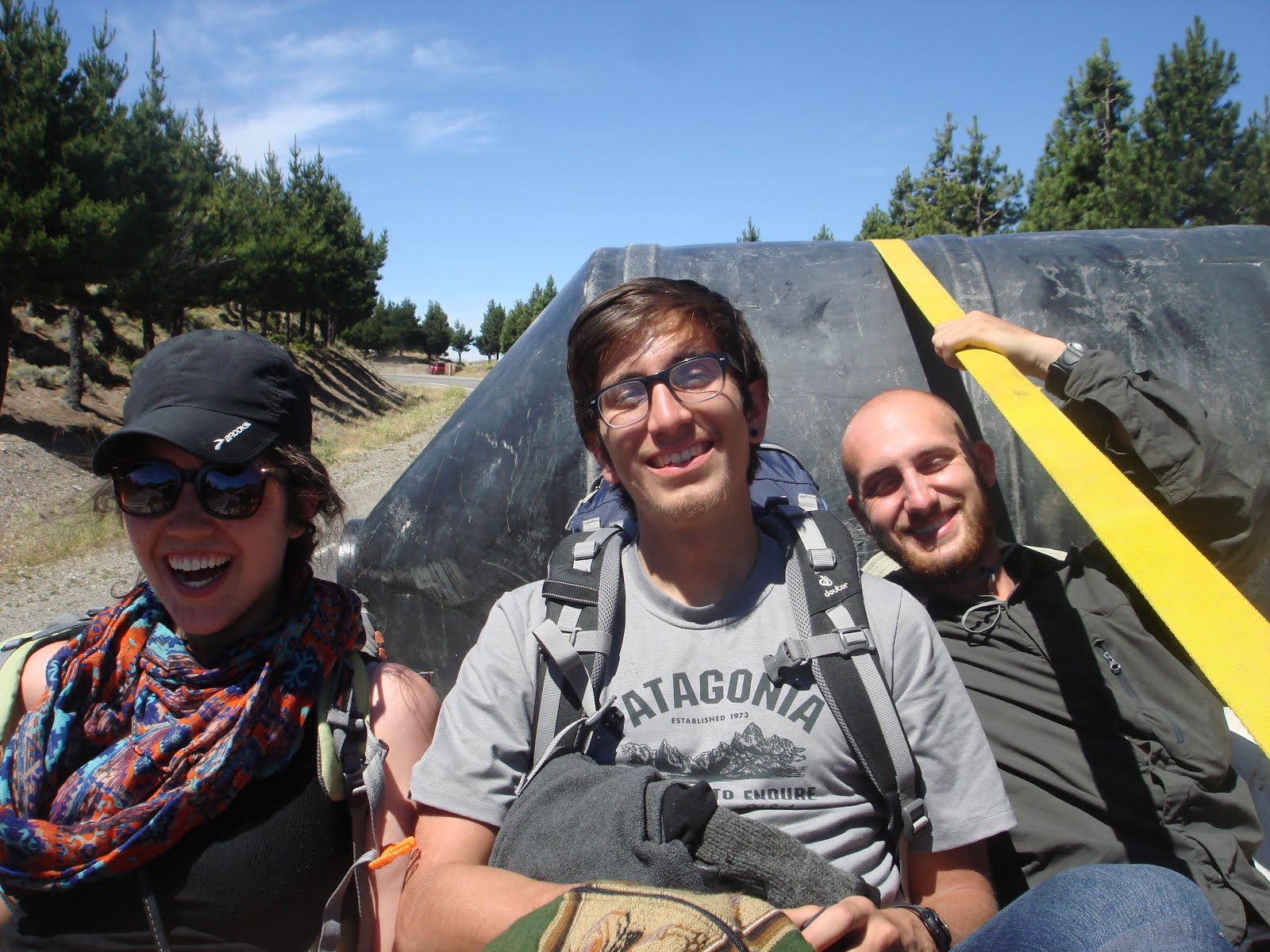 Me, Eric, and Jake on the truck ride we hitched to El Bolsón, Argentina

Yup, that’s how i would prefer to travel. If any of you Badgers study abroad, i highly recommend South America. Not to put a damper on any other world region, they’re all just as great. But, South America is always going to throw a complication your way. It will throw some beautiful people your way and some who will take advantage of your gringo-ness. And then, casually, there will be the Andes, out the window en cuanto driving along Argentina or Chile. Or, casually, you walk into a phenomenal dance musical protest. Or, you go to Argentina and drink mate all day with people from different parts of the world.

Just one thing to always keep in mind when going to South America and/or when traveling with people, TAKE IT AS IT COMES…you’d be surprised what lessons you will learn.

2 thoughts on “Life of a Mochilera: WE’LL TAKE IT AS IT COMES”