On to Lesson #2: Enjoy the Little Things

Blessed Mother Teresa once said: “Always be faithful in little things, for in them our strength lies. To God nothing is little.” And i never disagreed with her, in fact i have always wholeheartedly agreed with her, but i just never really thought about this until i traveled.

You see, when you travel, despite traveling and all of its glory, it is easy to get anxious about the little things as well: transportation, lodging, mostly the hows-especially during our second-half of our journey. Sometimes, i got so wrapped up in these little stressors, i realized i had to stop myself and remind myself that I AM ON VACAY. I said to myself AIN’T OK, THAT I FEEL THIS WAY, ON VACAY.

Yet again, i digress…Sooooo the little things. I love little things. You know, for example, a cup of coffee. I LOVE COFFEE and breakfast. Breakfast and coffee are beautiful, want to know why? Because they are a symbol of a new day. And i love breakfast especially on vacay because, normally, hostels offer free breakfast. Really, the most important aspect for me is that the hostel offers free breakfast. That lovely slow morning eating dulce de leche on toasted french bread with a cup of coffee was my little slice of heaven.

When i realized i could focus on the little things that brought me little bits of joy, all the rest didn’t matter. And this is a key follow up to my previous post about our travels because there were many times when i felt like the world was ending (this is not Jake and Eric’s fault, much more to do with my overdramatic human problematic self). So, what were these little things that calmed myself down?

To start, mate. Now i know there is a post completely dedicated to this drink (it’s about Lesson #3 as a Mochileira), but i just want you to understand how wonderful this drink is. I mean it’s even more stimulating than coffee. If you think coffee makes ME chatty, than you should sit around after i drink some mate…or maybe not. 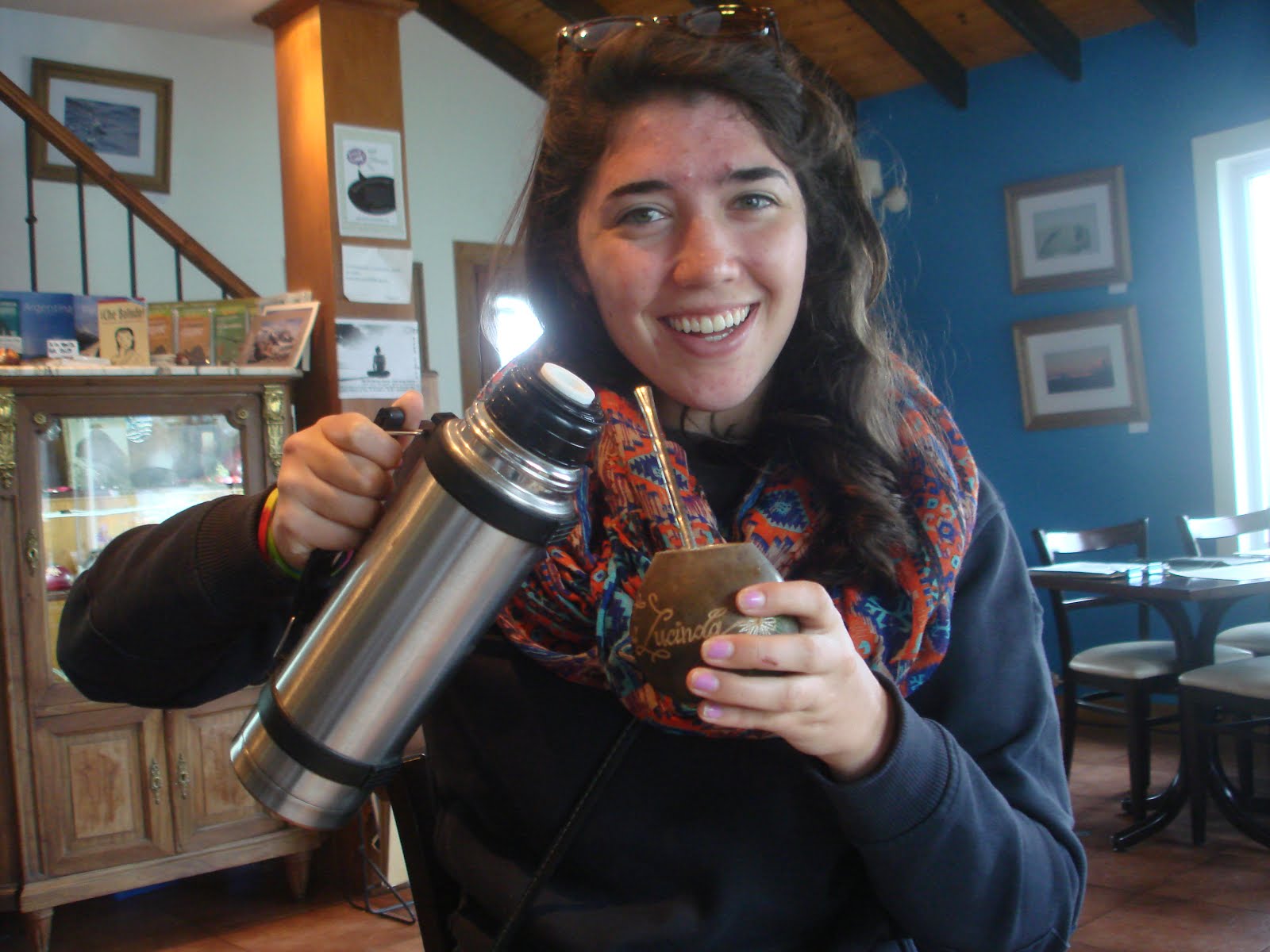 [me gettin’ my fix of some yerba]

Another thing that brought me so much joy on our travels was empanadas. Now, i have to dedicate this one to Eric because he really obsessed over them. Empanadas, if you don’t know, are either baked or fried pastry envelopes with a sweet or salty filling which could be carne (beef), pollo (chicken), jamón y queso (ham and cheese), and so on. Claro, it’s not just the empanada itself that is exciting. Believe me, if it were just eating the empanada, i wouldn’t find it so thrilling. I would get into why, but that would be a whole other blog. You’ll have to email me and ask about it because it’s a process, the search, the purchase, the waiting for the empanada, and the eating it. It’s all so beautiful. Come to think of it, i didn’t realize how little of a thing it was until Leande (our fellow intercambista from Holland) commented on how weird it was that all three of us were excited to eat empanadas.

Then, there are cerezas. Almost like cerveza…Too many of either and you’ll get completely different stories…In our case it was cerezas. Cerezas mean cherries in Spanish for you non-castellano speakers, AND THEY’RE DELICIOSAS. When we were in Los Antiguos, Argentina, we bought ourselves 5 kilos of cherries. At first, i thought, 5 kilos a.k.a. 5 pounds a.k.a. TOTALLY NORMAL. Well, after we purchased them (i was the one who pushed for the 5 kilo box by the by), I suddenly realized that was an idiot move because kilograms are not pounds. #Woops. I really have to blame the U.S. on this one because we need to change to the universal scale systems, ¿no? Otherwise we have Americans proving they’re fatties once again by accidentally buying 10 pounds of cherries. Regardless, better cereza than donut, rrrrright?

OK, so most of my little things are food. Opa. Well, you know food is delicious and it is a key factor in experiencing other cultures. This is my last food thing, ok? LA VEGA. In Santiago there is this place called LA VEGA. Now it is basically a heaven filled with millions of cheap veggies and fruits that are all in pristine condition. Santiago, i have to thank you on behalf of all Americans because we do not even have a clue as to what it means to have access to cheap delicious produce 364 days of the year. I also have to thank Los Quezadas because Mánlio brought me to this haven when i first arrived in Santiago. 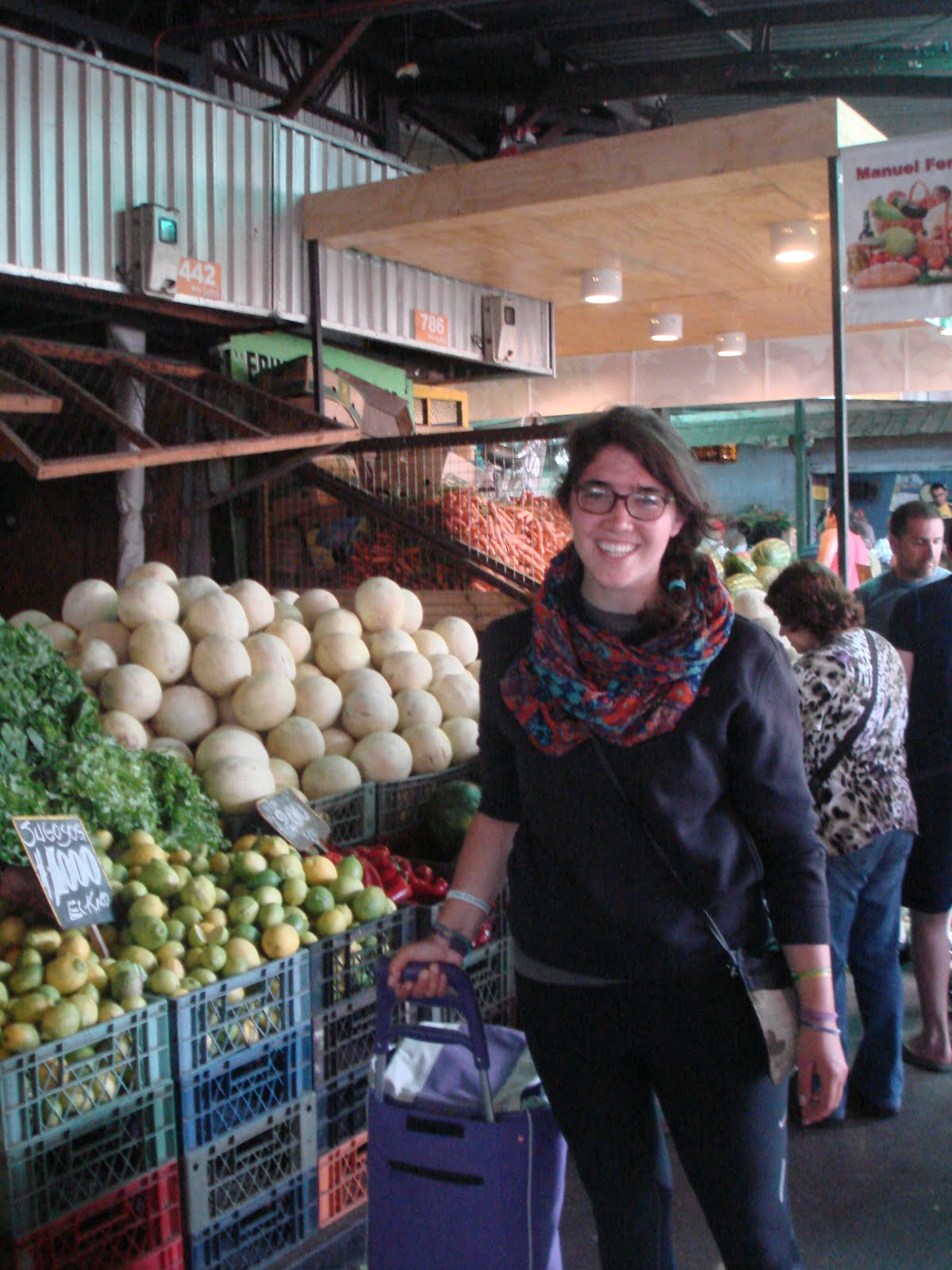 LEARNING DUTCH! So grateful we got to run into Leande one last time in Bariloche before she returned to Holland. One night we were in a hurry to find some karaoke, because, after all, you have to get your singing fix taken care of before you irritate anyone. Unfortunately, we didn’t have any luck. BUT while we were looking, Leande taught me some Dutch which is über fun-that über actually might be German, but she didn’t teach me that. I learned this: ik wil een lekker ding, which means whatever Google Translate will tell you.

For being in Patagonia, I can’t forget about all of it’s natural beauty. There is really too many little things to appreciate, but what really got me the most would include the clouds in Patagonia, and the color of the mountains in the distance surrounding glacial waters. Serio, clouds are so majestic in Patagonia. Some look like they come from a cartoon book which just marvels me. Then don’t even get me started on the indigo purple of mountains in the distance surrounding glacial blue water. That has to be me new favorite color combo. The photos below will not do any justice on these little things of nature, but promise me they’re majesty is surreal. 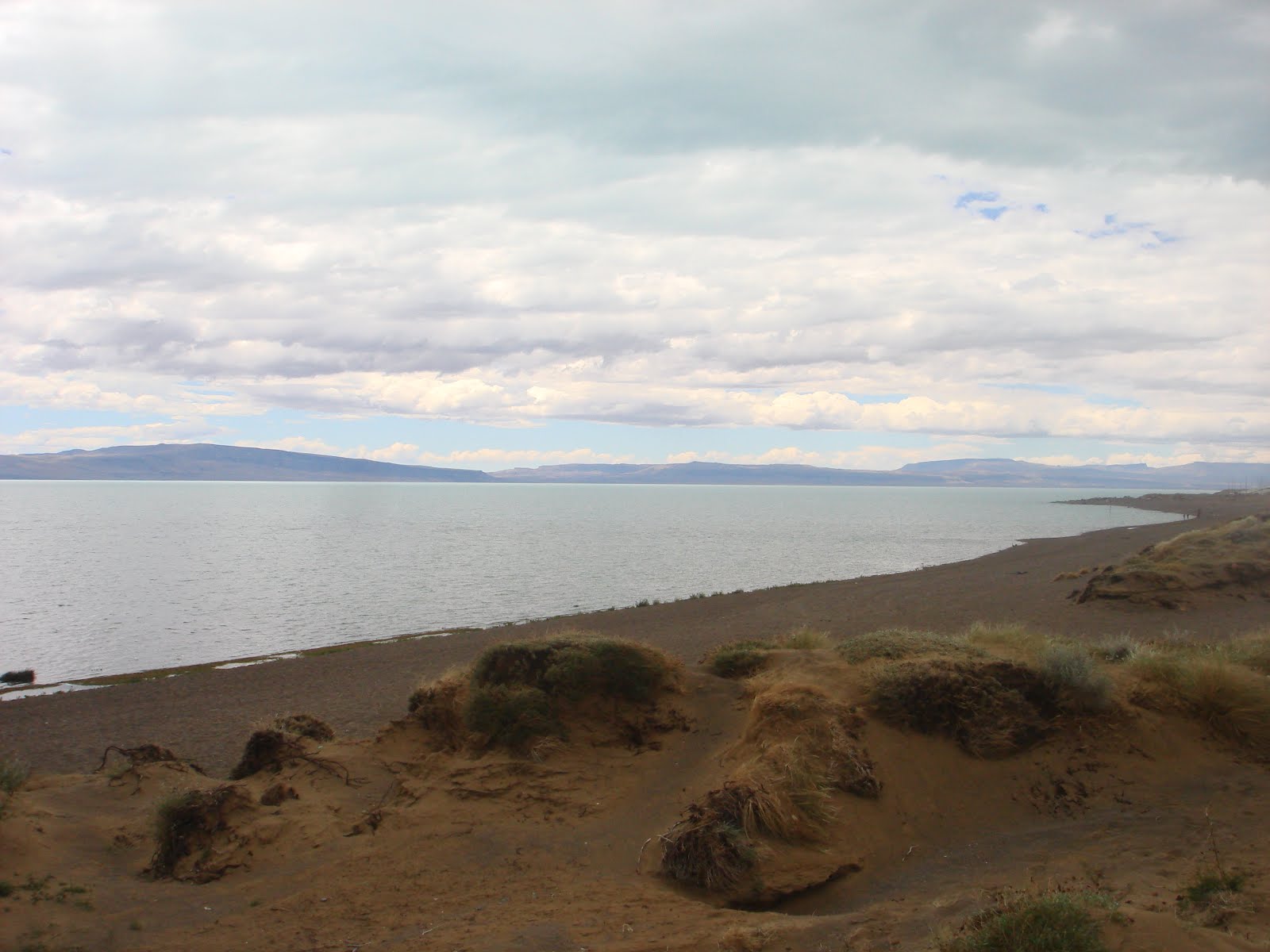 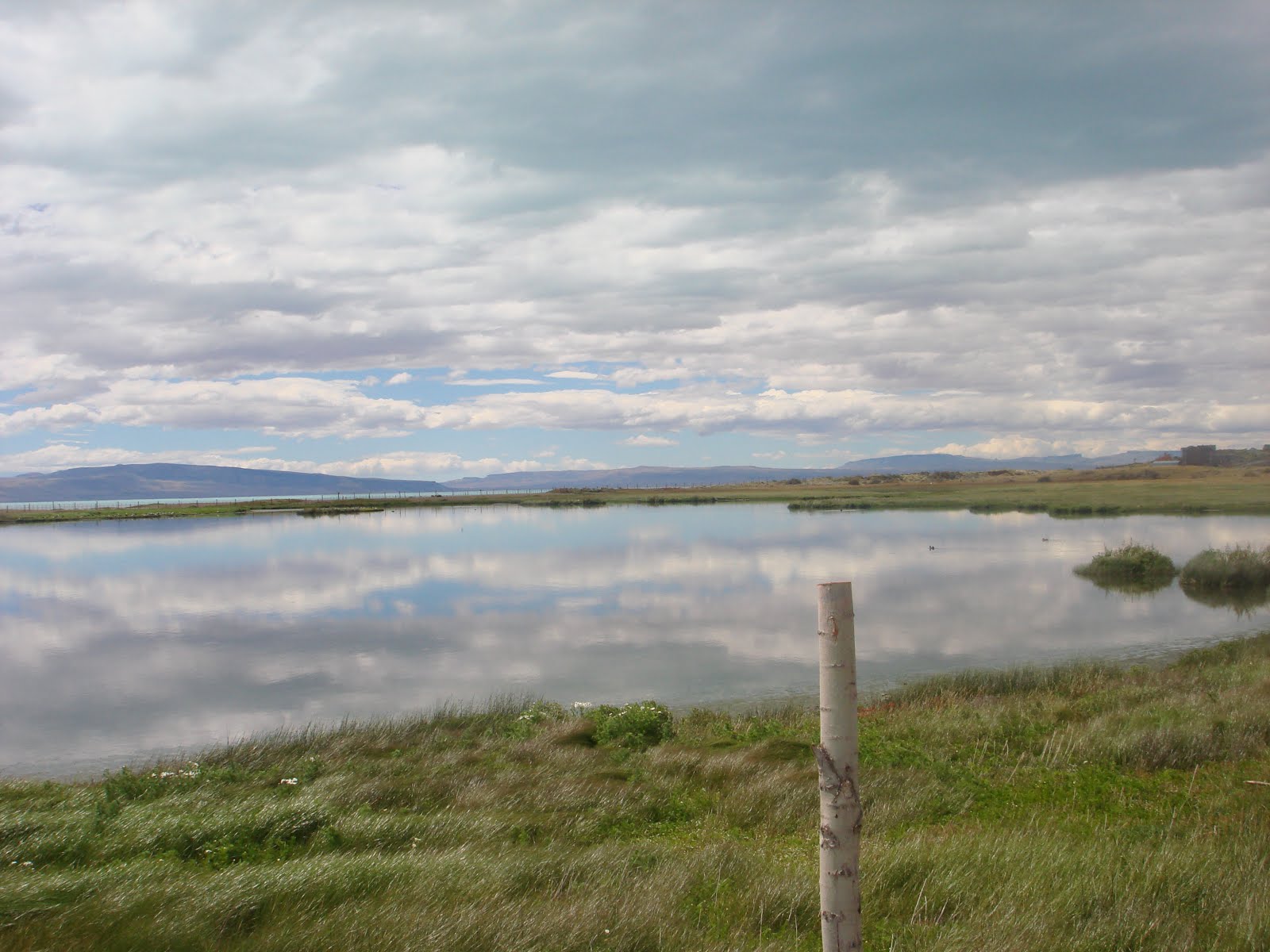 The other little things i want to mention include all of the randos we met. We met so many interesting people, like you don’t even know. Take someone from China for instance, Gary. Gary was so excited all of the time and so happy and he just made me smile. We met him in El Calafate, but then ran into him again at the beginning of our hike at Torres del Paine-he didn’t even remember me! I mean, i forgave him, because he’s Gary! Then there’s Javi from Buenos Aires at the Hostel we stayed at, who was just really down to earth and overall a stand up guy. We went out with him once and he was always on our case because we didn’t go out as much as him, sorry Javi! Then there’s the two Brazilians from El Chaltén, who were just so Brazilian they pronounced El Calafate like, el-ka-la-fa-tchi. And they also nicknamed one of the Israelis they met, Habib’s because of an Arabic fast food chain in Brasil. We also met two Mexicans in El Calafate, which made Eric really happy. And we also met two Frenchies in Puerto Madryn who inspired us to be aventureros along with a list of tips for the journey. Bueno, there are just too many people we met that all hold a special place in my heart. Thank you to all the wonderful people out there eager to explore and meet others! 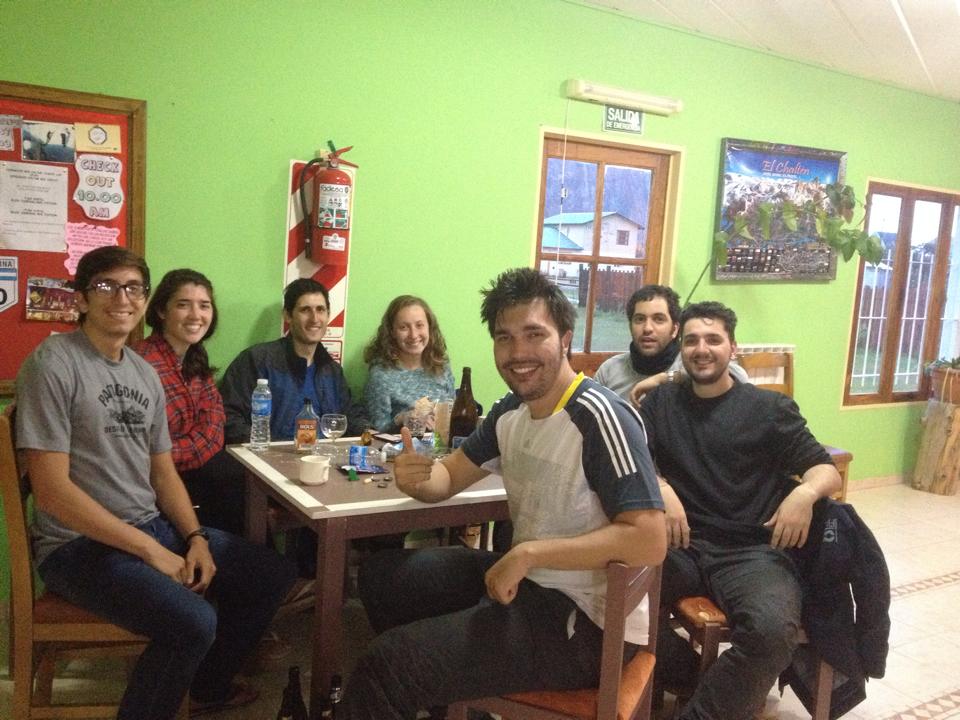 [Eric, Myself, three Israelis and two Brasileiros feastin’ together on Christmas Day!]

And lastly, i have to be grateful for all of the families who hosted us! We met so many beautiful, loving, and sharing people who hosted us in their very home throughout our travels. The Couchsurfing House Family from Puerto Natales was more than hospitable. Jorge from El Calafate gave us a place to stay. Flor in El Chaltén opened up her home to us even though she was already occupied with raising her children and hosting five other travelers. And Jake’s host farm family in Bariloche was also kind enough to take us in for a few days and show us around Bariloche.

Here is a pic of the whole gang, shoutout to Caro, who graciously hosted us in Bariloche! 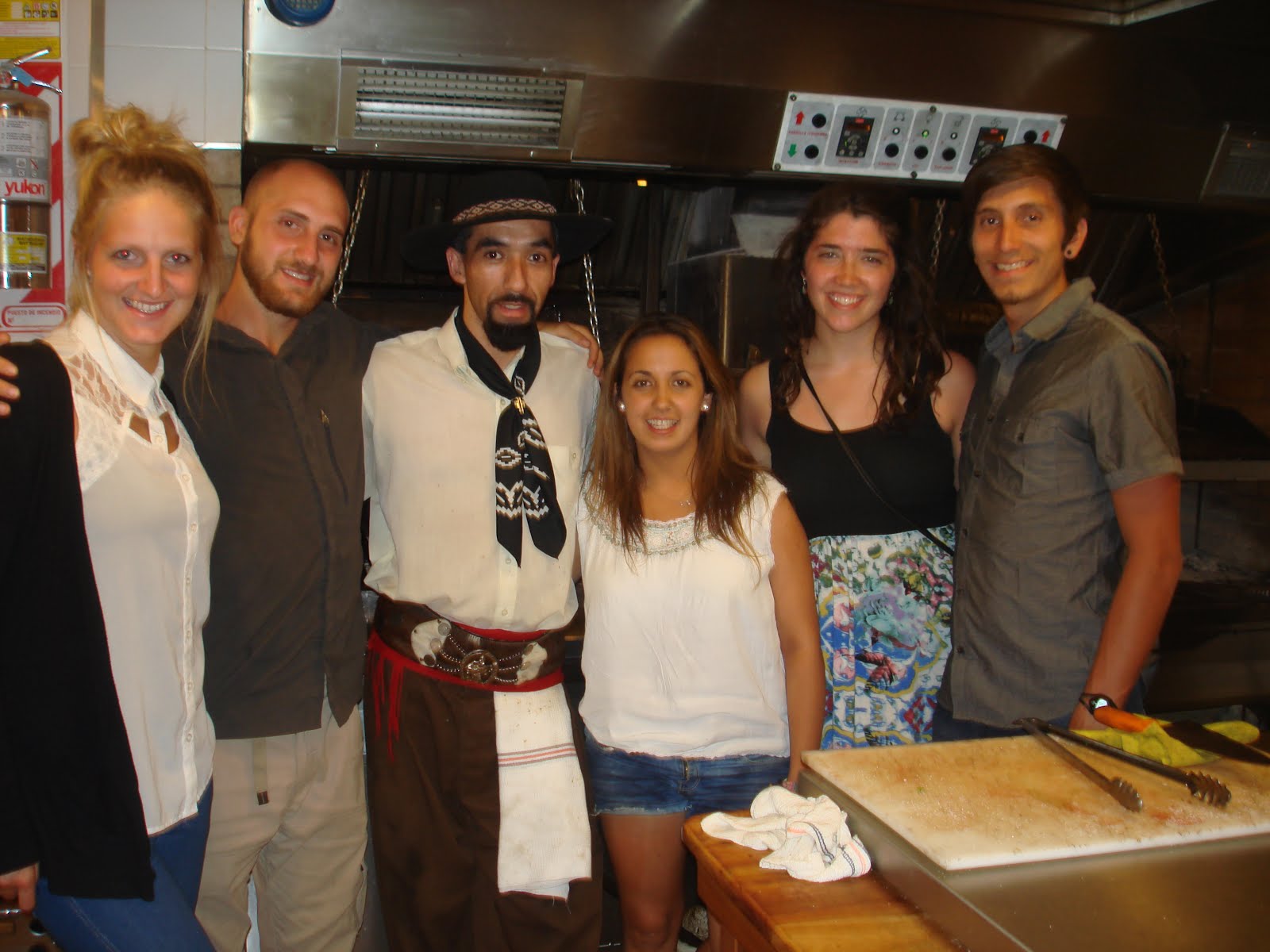 There was one last family that will stay dear to my heart es los Quezadas.The reason why that is, is because they are dear to Anna’s heart (my Badger Roomie), and when there is someone who is dear to a fellow Badger’s heart, they can’t help but be dear to my heart as well. Mánlio (Señor Quezada…Anna calls him Big Manlio but that is her right so i called him Mánlio) picked me up from the bus station and took me to La Vega right away, like i already mentioned. Kenny, his wife, met up with me to see a free theatrical show twice and it was splendid as we bonded over a cervecita and delicious cabritas (which literally means little goats but in this case means kettle corn…thank you español santiaguino). También, los Quezadas drove me to Valparaíso and Viña del Mar to see Pablo Neruda’s house!!!!!! Let’s just say i was freakin’ out being a Spanish major and all. And they just took me into their home and made me feel very welcome, so THANK YOU!!!! MUCHAS GRACIAS, viu? 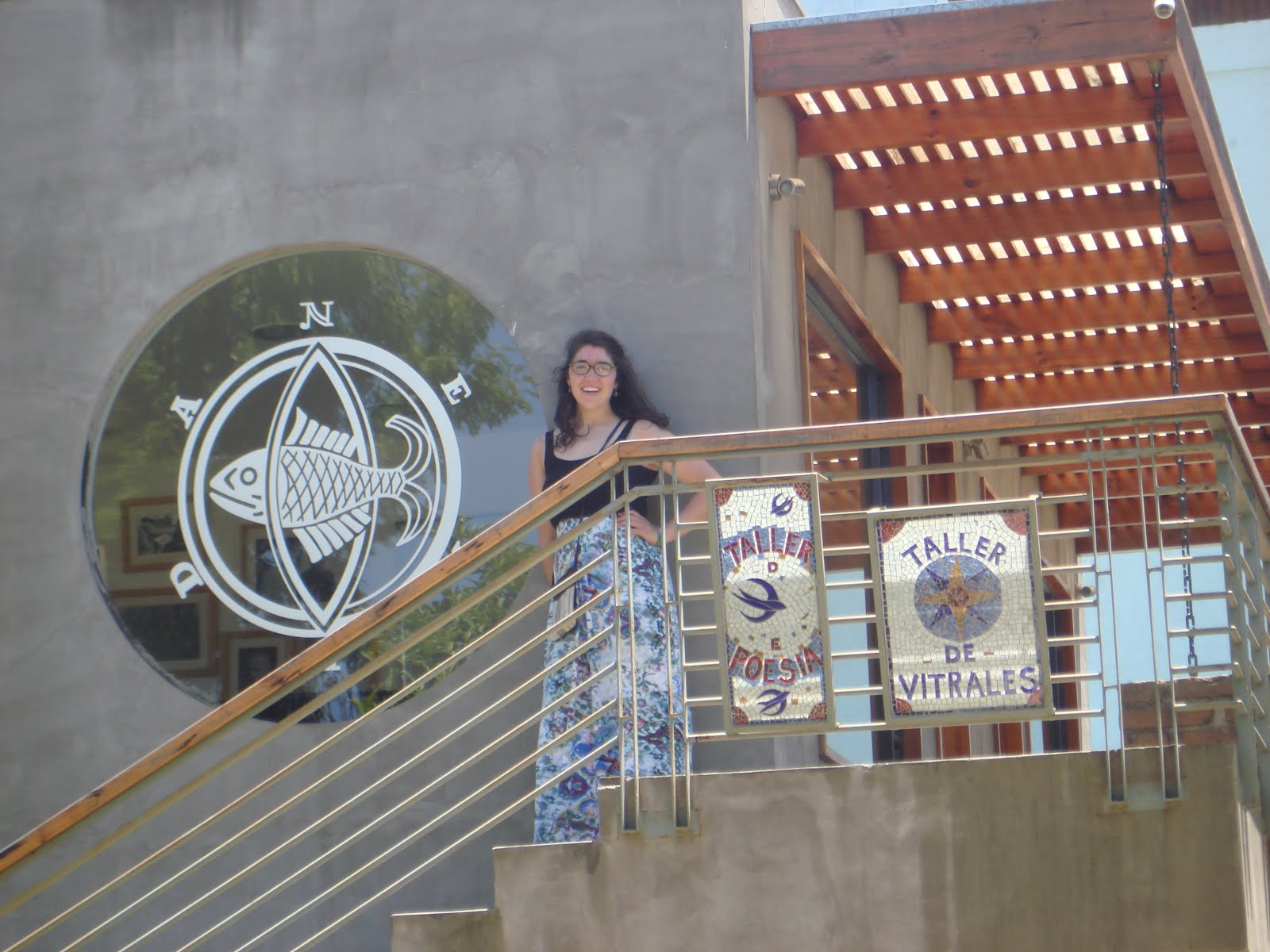 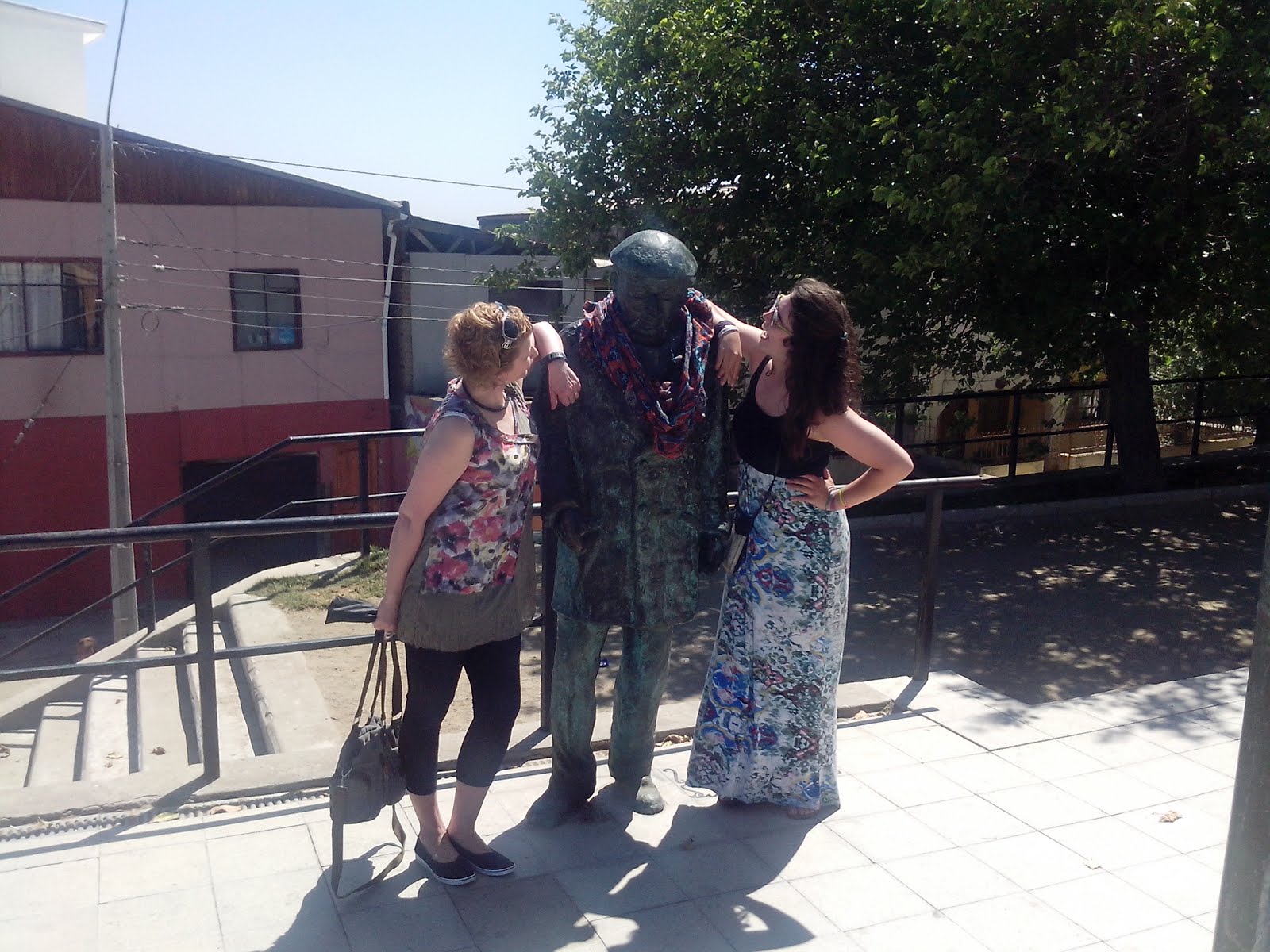 It’s the little things that get you. Who cares if it is midnight, and you have to sleep on a rocky beach because there is no other hospedaje disponible, YOU HAVE EMPANADAS. Who cares if you couldn’t conseguir a hitchhike on the Carretera Austral because of a Chilean lady who lied to your gringo face, YOU HAVE 10 POUNDS OF CHERRIES TO EAT. Who cares if you are getting anxious before your first four day trek in Torres del Paine YOU JUST RAN INTO HAPPY ‘OLE GARY. And, like i said, it’s not just the food, all right? It’s also the people. Put the two together and you have yourself a fabulous time and no reason to be upset, so let’s just say i have a new appreciation for the little things, which i think will be an essential lesson for spending another semester away from home here in Belo Horizonte.

5 thoughts on “Life a Mochilera: Enjoy The Little Things”