Last year, I got a job at Macy’s because I needed to do fun things like eat and pay rent. To be fair, the job wasn’t terrible. I learned a lot about bedding and china (the plates, not the country) and most of my coworkers were whip-sharp retirees who were exceptionally kind, after they warm up to you. So, I spent most of my nights and weekends in a poorly lit basement dusting place settings that cost more than I made in a month. Obviously, this is the most romantic place to meet someone.

At first, Jon and I didn’t work together much. He had the magical ability to swap shifts around until he only worked mornings, and he technically worked in a different department. However, eventually, whether by accident or the result of an elaborate scheme by our coworkers, we began working together more. He taught me about blenders and luggage sets, sustainable transportation systems, local Madison restaurants, and ultimate frisbee. We decided to go to a hockey game together after Christmas, just as friends, because I had missed most of the games of the season due to work.

And then the holiday schedule was released. Working in retail in the run-up to Christmas is one of those impossibly frustrating experiences that everyone should experience at least once in your life as a sort of character-building exercise. I was scheduled to work the entire week leading up to Christmas Day, which, because my family now lives 5 hours from Madison, meaning I wouldn’t be able to go home for Christmas. I apparently looked pretty pathetic when I got the news, because Jon almost immediately invited me to join his family’s Christmas parties. So, before we had even gone on our first date, we met each other’s extended families, spent two holidays together, and set ourselves on some sort of relationship fast track.

I say all of this not only to brag about how amazing Jon is, though that is a piece of it, but to show that I never planned on having a boyfriend while abroad. I knew that there would be many sacrifices, but this wasn’t one I was especially prepared to make. So, I tried to make a confusing situation as straight-forward as possible. I was leaving for two semesters, no matter what. I had been planning this trip well before I met Jon, and it wouldn’t be fair to myself to drop this dream for a boy I had only known a few months. Fortunately, Jon agreed. So, we had an end date hanging in the back of our minds; sometime in August I would go halfway around the world. Sometime in August we would need to figure out if we wanted to break it off or struggle along together.

Then I was granted an internship with the Department of State in China for the summer. Nine months had turned into twelve, and we would only have a few more months together during one of my busiest semesters ever. I freaked out. This was too important of an opportunity to turn down, but can anyone reasonably expect someone who you have only been dating for six months to tolerate one year apart?

As of today, we are still together. We spent three hours yesterday Skyping and talking through our plans for when I return home, and when I go off to Washington D.C. for an internship this summer. We’ve been dating for roughly a year and a half, but have only been on the same hemisphere for one third of that time. I won’t lie. It hasn’t always been easy. The 13 hour time difference makes spontaneous conversations almost impossible. We can’t grab Thai take-out, throw on Futurama, and work on homework together anymore. I can’t help when he’s running a fever or nursing a bum shoulder. And he wasn’t there to celebrate with me when I (finally) found out that I landed my dream internship this coming summer.

But, I think that being abroad has actually helped us. I know that I can trust Jon to be honest and supportive, even in trying situations. We’ve kind of figured out how to balance personal goals with our responsibilities to each other. We’ve gotten much more creative in our relationship, and have more appreciation for the efforts of the other. We’ve both demonstrated that we are willing to work to keep the relationship going.

Communication has been absolutely essential in this. There is no substitute for in-person conversations, but between Skype, Facebook, Instagram, and the 10 billion other apps out there it’s not that difficult to talk. The 13 hour time difference complicates things, but it isn’t insurmountable. We’ve both gotten really good at calculating time zones, and not messaging each other at 3am. Barring sickness, unavoidable travel dates, or poor wifi, every Friday night/Saturday morning we have several hour long Skype dates. Some of the spontaneity that makes relationships fun is gone, but a well-timed cat picture or web comic can at least bridge the gap. And, truly, it is difficult not being able to immediately share the ups and downs of life abroad with him. But this also forces me to process my own thoughts and experiences more thoroughly. Although I have been known to rapid-fire ten messages in a row to force Jon to wake up at 6am to share some really important news. It was a fun moment, made even more so because it doesn’t happened very often.

It’s important to remember that there will still be bad days and fights, but you can recover. For us, what seemed like the easiest part of the year, Jon’s visit to Hong Kong, was the most challenging. We had two weeks together over our one year anniversary, Christmas, and New Years, so there was a ton of pressure. We both wanted, needed, this to be the best two weeks of our relationship. It was not. Without going into details, because I don’t need the entire internet knowing this, we drove each other crazy. Now, months later, the best way for me to understand what happened is that I was going through a kind of reverse culture shock as he was going through culture shock. We were so focused on making the most of every moment that we didn’t give each other enough time or space to adjust to the changes in each other.

For me, I think this entire experience can be summed up by one quote:
“If you love somebody, let them go, for if they return, they were always yours. If they don’t, they never were.” Kahlil Gibran. 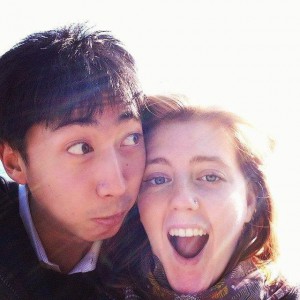