At the memorial of the 1945 bombing of Hiroshima I wish I had been a fly on the wall.

I realized I should stop caring about what people might think of me and my heritage, and rather focus on remembering the 146,000 killed in the Hiroshima bombing alone.

We first walked around the A-Bomb Dome, the lone survivor of the bomb. It stands only 160km from the bomb’s central hit spot. I asked Sahyo if they took out the windows and doors so viewers could see the inside, and she told me they haven’t changed anything to it except for minor preservations. It’s a building burnt to stone.

The day was sunny and the weather was like a fall day. It kind of made me want to escape the memorial and enjoy aisukuri-mu (ice cream) by the water, but I knew my priorities for the day were held there.

The weather though was soon forgotten when we went inside the Hiroshima Peace Memorial, the bombing’s main memorial. I didn’t take any pictures, either at the Dome or inside, because I figured the internet and one’s imagination were good enough. I didn’t want to appear like I was there for bragging rights either.

The memorial handed out postcards reading “Share it-what happened on August 6, 1945.” And I couldn’t agree more. It’s one thing to know what happened and another to understand it. I believe it’s important to grow our knowledge beyond facts, and to understand an event’s immediate and lasting effects, so that we can plan for our future actions accordingly.

While the images in my head may last a lifetime, the message I will remember focuses on peace. Across the Motoyasu River from the A-Bomb Dome stands a small tribute to Sadako Sasaki, a young girl who died from leukemia from the bomb’s deadly effects.

Sadako represents a metaphor for all the children who died from the bomb, both instantly and later on. Sadako’s example started the memorial because her classmates made her 100 paper cranes. The cranes now stand as a symbol to peace and an attribute to lives lost.

There are cranes everywhere, and most of them are brightly colored. They act as a symbol of remembrance of the past and hope for the future.

One thought I’ve had after visiting is that perhaps it’s peace we should use as a driving motive in our desires, rather than nationalism or glutinous imperialism.

Without labeling myself a pacifist, I think we could all benefit a little by acting on moral rather than strategy. It may keep our lives a little less dull from the emotions of war, and add a little color like the ones from the cranes. 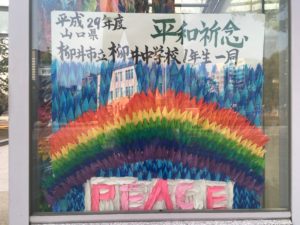