I first began noticing little pictures of a white cat and pink bow on the corner of chocolate boxes and advertisements on trains or on the pockets of some women’s shirts. Once in awhile I might spot a pink umbrella covered in faces of hello kitty or girls wearing socks sporting a similar design. However, I chalked this up to Hello Kitty simply being more popular than in the United States, little did I realize yet how much more popular it was. 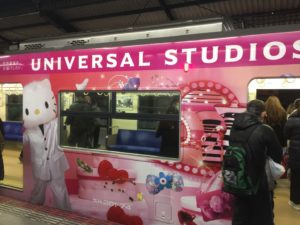 On a long day of sightseeing, I passed by a window display advertising Hello Kitty themed desserts. Partially because of my sweet tooth, and partially from hunger, I decided I would go try one. I entered the store to which the window display was a part of, and instead of a counter to order the desserts, I was bombarded by all manner of things Hello Kitty: bookbags, keychains, wallets, sweatshirts, stuffed animals, postcards and moe. I strode through the store, determined not to be tempted to buy more Hello Kitty goods than I had planned, and once I reached the back of the store it opened up into a little mall with more Hello Kitty stores!

Finally I found the store in the mini Hello Kitty Mall that was selling the desserts; relieved, I immediately sat down and ordered. While I was waiting for my dessert to arrive, I took in my surroundings which was the Hello Kitty restaurant. Everything was pink, with one wall decorated in Hello Kitty wallpaper, and another wall was cut out with a floor to ceiling window giving gorgeous views into a private, pristine Japanese garden complete with a waterfall. To my right, I noticed two women eating curry rice, but the rice was shaped and dyed in the fashion of Hello Kitty! That is when I first noticed a life size, stuffed Hello Kitty sitting with the women. At first, I imagined the women must have brought the Hello Kitty from home or purchases it in one of the many many Hello Kitty stores, but as I began to look closer, not just at the decorations but at the eating companions of many diners, I saw that they, too, had life sized Hello Kitties next to them! The waitress must have seen my puzzled expression because she soon came over to me with another life sized Hello Kitty, extending it towards me with both hands and offering “picture?” The desserts arrived closely behind the waitress offering me the Hello Kitty, so a joint photo shoot occurred with me, the Hello Kitty and the desserts. 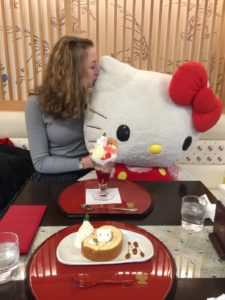 The desserts were yummy, however slightly overpriced. It was quite the experience!