Embracing being the classic Osaka tourist, I headed out to explore Osaka’s Aquarium: Kaiyukan. The aquarium borders the ocean and a shopping mall. Kaiyukan is famous for its whale sharks, and so there are countless pictures and statues displayed of these enormous creatures. 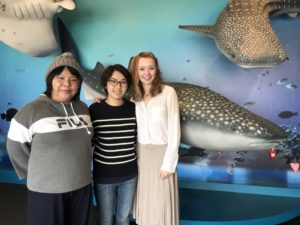 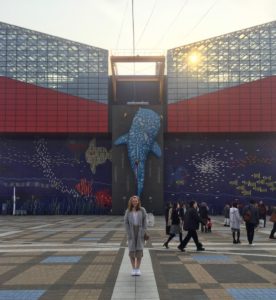 The aquarium did a great job with the wow factor. Almost as soon as you enter, you are brought to a tube you walk through surrounded by fish swimming in the water all around you. And then you go through a spiraling descent around a giant fish tank. On the outside of the spiral are various smaller exhibits that lose all attention in the presence of the large fish tank on the inside. The large fish tank is so massive that you cannot see the windows on the other side, and swimming inside are dozens of sharks and stingrays.

There were hammerhead sharks and other smaller sharks, but you could not mistake the two enormous whale sharks. I actually jumped the first time one swam close because it was so big it could block the entire length of the floor to ceiling window wall and then some. I was reassured many times by the friends that I was with that they don’t hurt humans, but I couldn’t help being both in awe and nervous around such gigantic animals. 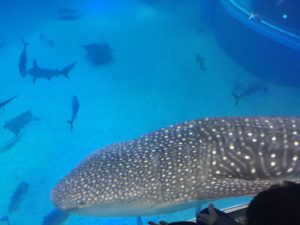 After the aquarium, we went to the nearby shopping area and I was treated to an uniquely Osakan afternoon. First we tried purikura, Japanese photo booths. They didn’t acquire the name simply by being photobooths in Japan, but they allow you to edit, draw and write on the pictures after you take them. They do keep a timer on how long you can spend editing photos which can actually get a little stressful near the end. The shopping mall we went to only had around ten, but other areas in Japan I have been to have entire floors dedicated to Purikura. 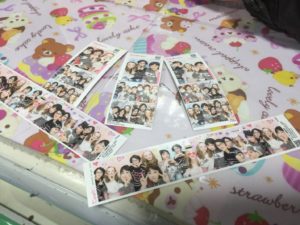 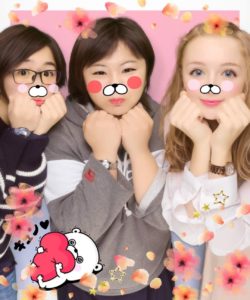 At this point I was starving so we headed to an okinomiyaki restaurant. All the tables in the restaurant had flat stoves which I only noticed when I almost burned myself. After ordering, they came out with bowls filled with cabbage, egg and various other ingredients we had ordered including shrimp and pork. They mixed the bowls and then dumped the ingredients into a sizzling pancake on the stove. Okinomiyaki is a delicacy local to Osaka ( along with takoyaki) which loosely translates to “fried what you like”. It was described to me as a pancake filled with cabbage and meat, but I would say it is more accurate to describe it as a pile of cabbage loosely held together by egg and filled with meat. The waitress came over every so often to check if it was done and flip it when needed, and finally she signalled for us to tuck in and eat! Honestly, it felt like I was eating cabbage with a little meat thrown in, but I thoroughly enjoyed it. I would recommend it to anyone who wants to try Japanese food, specifically Osakan cuisine! 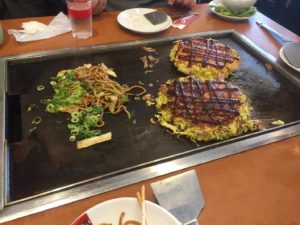