Who has heard of Fukuoka? I know at least I sure hadn’t before coming to Japan.  Japan is made up of many islands,  but the main three islands are Hokkaido (where Sapporo is) in the north, the main island including Tokyo and Kyoto and Osaka, and the southern island including Fukuoka and Nagasaki. Fukuoka is one of the largest cities in the the southern island and is known for its unique foods as well as being the home of wisteria flowers (called fuji flowers in Japanese) during the end of April and beginning of May. When I found out Fukuoka was home to the spectacular wisteria flowers I booked a plane ticket almost immediately! 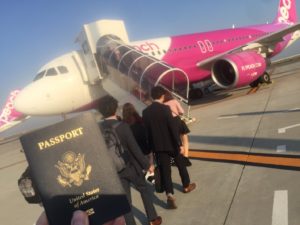 I planned to only spend a weekend in Fukuoka, one night and two days, so I woke up at 4AM to get to Fukuoka for 8AM! It was empty when I got in, but that made it the perfect time to scope out Fukuoka’s less well known temples. Some of them are even world heritage sites! 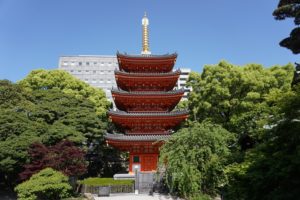 At around 10 AM, the tour buses full of tourists (mostly Japanese) came and so I decided to move onto lunch. (Yes I know it was super early for lunch but I ate breakfast at 4:30AM on the train to the airport!) Fukuoka is famous for their ramen, which uses thinner noodles than normal and a thicker pork broth. I found a restaurant that is famous for it and even though it was only 10:45AM and it opened a 11 there was still a line! Fortunately, the restaurant was quite big (I assume they expanded because they are so popular) and by 11:10AM the entire place was packed and there was still a line outside! It was delicious and on top of ramen I ordered dumplings which made the meal even better. 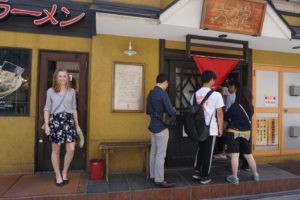 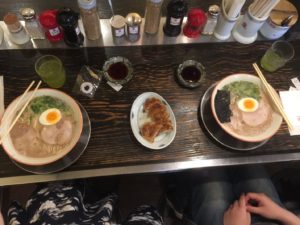 After lunch, I proceeded to hike to Fukuoka’s parks. While there are buses connecting the parks, I soon found out they weren’t very accurate or reliable at least for tourists. Walking only took half an hour between each park, but it was so hot out I kept finding places to sit in the shade and rest. One of the parks had Fukuoka castle, which I thought would be a castle like Osaka Castle or Kyoto’s Nijo Castle, but instead it was just the remains of the foundation. It did have some beautiful views! 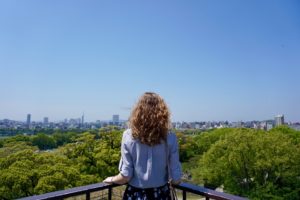 By the end of walking to these parks , I was exhausted and hungry again, so headed to the nearest chain restaurant Saizeriya. Saizeriya is AMAZING because it serves pasta dishes like carbonara but all it’s food is so cheap! Carbonara costs 399 yen, or around 3.50$. After finishing it was around 4PM and he next stop was dinner on Tenjin street, so I had room a three hour nap. 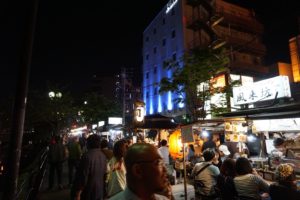 Tenjin street is something unique to Fukuoka. Is it a street along the river lined with food vendors selling admittedly overpriced but delicious dinners. I was warned in advance by my boss to only go to the vendors with a line because the ones without a line may not be good (and I didn’t want to risk it especially since a common food to eat at these vendors is chicken). While I was checking everything out, I couldn’t help but notice I was the only white person there! Normally I wouldn’t have minded, but here people would stop and take photos of me, follow and take videos of me or talk to me and  ask me to come join them at a certain vendor’s stall. I tried my best not to mind and found a vendor that I had even seen reviews about online as being delicious. I ordered yakiramen (fried ramen) which even my coworkers back in Osaka hadn’t heard of, but is famous in Fukuoka and quite yummy (if not a little unhealthy as well). I also ordered the classic chicken skewers everyone recommends eating in Japan. And yes, these chicken skewers has chicken heart again (see one of my earlier blog posts about eating chicken heart for the first time). 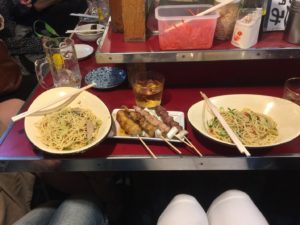 After dinner it was close to 10pm! But we still had another full day ahead of us to see the Kawachi Fuji Gardens and canal city.

A two hour train ride brought me to the remote countryside of Japan. Another bus winding through hills and valleys arrived at the Kawachi Fuji Gardens (Fuji is japanese for wisteria flowers). Words can’t do the place justice. 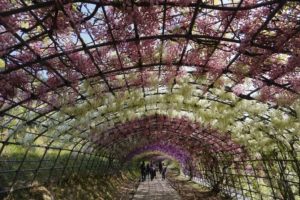 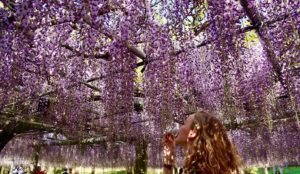 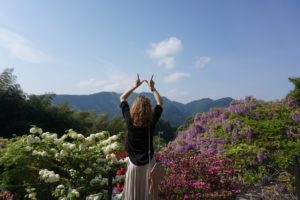 I spent far too long here, because before I knew it I needed to rush back to Fukuoka to catch my flight home! I was able to quickly stop at the canal city before going to the airport. Canal city is this shopping mall with a canal running right through the middle of it. 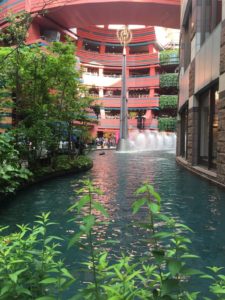 Fukuoka was so different from Osaka or any of the other cities I have visited so far on the main island. One of the most interesting things is that many places, like the canal city shopping mall or Tenjin street, are designed to be open outside all times of the year. This means that this city never expects it to be too cold to be able to use all their facilities. Fukuoka also had considerably fewer foreigners. I vividly remember being the only one who was not Asian for most of the trip, with the only exception being the Kawachi Fuji Garden. I know I should be used to standing out because I am a tall white woman in Japan who cannot speak Japanese, but in Fukuoka I felt even more aware of how different I was compared to other cities I have been in.

That’s all for now!