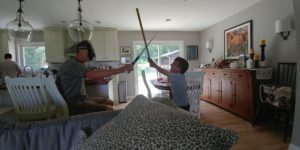 As I prepare to leave for China, a lot of my family has come to say goodbye as if I’m leaving forever. I’ve gotten ‘advice’ from family members who haven’t travelled abroad, and advice from other people who have travelled from countries that have nothing to do with China. It’s actually really endearing.

A bit about my family: in the picture, you see my younger brother, Leeland. As I get older, more people confuse me for his mother than ever before. The person he is fighting is my grandpa, wearing a Darth Vader mask. My sister, Amanda, mother, Heidi, and my father, Andy, are not pictured, but we don’t often take pictures together, so.

I think the most nervous person is my dad—he is beyond freaked out about me being in China. He’s also extremely helpful with me preparing to leave and has given me a bunch of advice and reminded me of things a lot of other people would probably forget. My mom is a lot more calm, but I’m sure she’s nervous, too. However, she seems to have a bit more faith in me going abroad, though she’s going to miss me a lot.

For my younger brother, he still doesn’t really realise that I’m going to be gone. At only seven, he doesn’t really have a good perception of time. At all.

“How long will you be gone? Five minutes?”

So, yeah, a little bit longer than that. He also thinks China is the same as Japan, which makes a little more sense for a seven-year-old. I snuggled him for the last time tonight and I’m going to miss him a lot.

I’m not entirely sure how my sister feels but after we watched a movie and had food together last night, I got like three hugs, so I know she’ll miss me.

Most of my thoughts have been going towards how I will handle culture shock. I think the first day—where I’m honestly just trying to get to the hostel to meet with another student on the trip—I’m going to be completely just freaking out. There’s a lot of people in Beijing, and I grew up in a town about about 10,000 people. That’s a pretty big change for a girl who has only been to Chicago once.

What I’m really hoping to avoid while I’m there is any food poisoning—though I’ve heard it’s inevitable, I’ll get back to you on it—and too much culture shock. This isn’t to say I’m going to stop exposing myself to the culture out of fear, but I am saying that I’m going to be wary. Not just throw myself into the raging waters of Chinese culture all at once.

Once I get there, it might be a few days until I post again—got get some good pictures, a SIM card, and settled in—but look forward to a response! My flight is TOMORROW at 6:35 in the morning. So, wish me luck! Off I fly!

3 thoughts on “Before I Go”