Before starting classes in Tianjin, I am spending a couple weeks touring in Shanghai and Beijing with my family. After sluggishly deplaning at Pudong International Airport, we took the Maglev train from the airport right into the city — zipping along at 270 mph, the train turned what would have been an hour-long cab ride into a seven-minute journey.

Once we got into the city, it was just a little bit of bustling around on the metro and walking through the busy city traffic to get to our hotel. It shouldn’t have been that bad. Unfortunately, somewhere between Los Angeles and Shanghai, both wheels on my suitcase broke. As such, I was left dragging 50 pounds of deadweight across one of the biggest, most crowded cities in the world. My tendency to over-pack did not serve me well.

Our first meal in China was rocky, to say the least. We picked a random restaurant in a mall near our hotel, and when they asked “回说中文吗？” (“Do you speak Chinese?”), I unfortunately said yes. We received a menu all in Chinese, with no pictures. We tried to order a nice chicken dish with white rice for three people, paired with a bottle of white wine. But as it turns out, we ordered chicken claws, 3 family-sized vats of rice, and a bottle of tequila. Fortunately, the employees were forgiving and helpful, and thanks to translation apps and a lot of patience, we managed to pull together a semblance of a normal meal, and it tasted delicious.

Shanghai boasts a fascinating blend of ancient Chinese history, colonial European influence, industrialization, modern Chinese culture, and 21st century westernization. The 2,000-year-old Jing’an Temple, featuring stunning golden architecture and a 15-ton solid silver Buddha, is situated right next to a brand new Lulu Lemon store in the middle of an up-and-coming commercial neighborhood. The Bund, which is where the Huangpu River cuts through the city, displays an interesting dichotomy between older, western European-style buildings north of the river, and the modern Chinese buildings which make up the quintessential Shanghai cityscape south of the river. 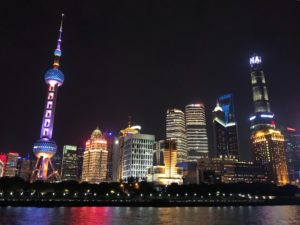 Here are some other highlights from Shanghai:

The Yu Garden: I spent hours exploring the rocky gardens, fish ponds, wooden bridges, and mini temples of, quite possibly, the greenest space in the city, and I am certain I barely saw half of it. It was so easy to get lost, literally, because it was kind of a maze, but also mentally, amid the stunning architecture and greenery. We finished our exploration of the ancient garden with a trip to the Dairy Queen, which was right outside the gates. 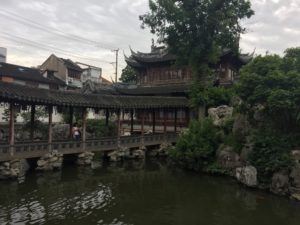 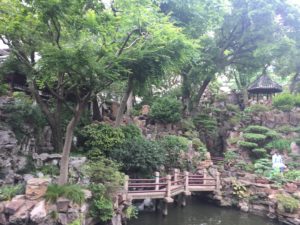 Tianzifang: The narrow streets of this little market are lined with shops and stalls selling everything from fake designer handbags and sunglasses to souvenir magnets, from street food to mini jade sculptures. The key with markets like these is to never pay the vendors’ original asking price. These markets are made for haggling. Figuring out all the tricks of haggling over prices can be tough at first, but it’s so worth it — relentless haggling can mean a difference of several hundred yuan, depending on the item. 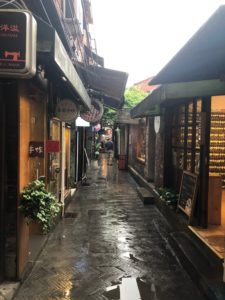 The Jing’an Temple: As mentioned before, it is a beautiful ancient temple in the middle of the city, which has several different Buddha statues, as well as a drum tower and a bell tower. In addition to serving as a tourist site, it also retains its use as an active temple. I even saw one monk, dressed in his traditional 加沙pull up in his Maserati and disappear into a private section of the temple. 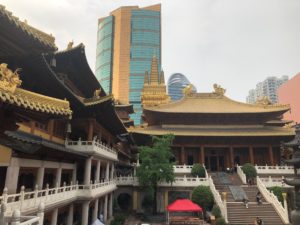 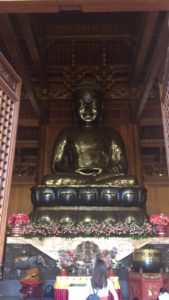 I am on my way to Beijing now, and am certainly looking forward to the next week in the country’s capital. But I still can’t help but be a bit apprehensive. My new sim card has stopped working, my new suitcase is smaller than my old one, which forced me to abandon some stuff in Shanghai, and my credit cards have not been consistently accepted. I don’t know what else will come my way, but I am looking forward to facing it.

In the seat in front of me on this train is a young boy — maybe two years old. Every now and then, he pops his head up and looks at me. He has chubby cheeks and bright eyes, and he smiles at everything. I’m thinking about saying something to him in Chinese, but I’m worried that his vocabulary is more extensive than mine. I can’t risk it. He disappears behind his seat, but soon pops back up to throw a grape seed at me. He smiles. I laugh. Repeat.

I can only hope that I will soon be proficient enough to communicate with a two-year-old.

1 thought on “Arrival in Shanghai: Do I actually know any Chinese?”