Memory is a powerful thing. Memories shape the way we interact with situations and people. Memories influence our decisions, our mood, our understanding of the world around us, reminding us of lessons learned and mistakes made. In Argentina, the nation’s memory holds records of a tumultuous political history filled with military coups, governments flirting with autocratic systems in place of democracy, and harsh political divisions that run as deep as ever today.

In 1976, two years after the death of Juan Perón, one of the most prolific and influential Argentine politicians to date, a military coup overthrew Isabel Perón, who had assumed the presidency following the death of her husband in 1974. Headed by General Jorge Rafael Videla, the “National Reorganization Process” sought to eliminate any and all communist, socialist, or otherwise leftist sympathizers. In the subsequent seven years, the military government would actively seek out, detain, and “disappear” as many as 30,000 individuals, including pregnant women and their babies born in clandestine centers throughout the country. The majority of the babies born in captivity were illegally gifted to families sympathetic to the military dictatorship and never told their true identities. The victims of the military dictatorship were often abducted by government forces in broad daylight, taken to the clandestine centers, tortured, imprisoned, and later killed in “vuelos de la muerte” (flights of death), where the detainees were injected with a heavy sedative, flown in airplanes over the Rio de la Plata, the river between Argentina and Uruguay, and dropped alive into the water to drown.

This week my human rights class took a field trip to the Ex-ESMA, a former naval academy for lower-ranking naval officers that doubled as one of the largest clandestine centers during the military dictatorship. It is estimated that more than 5000 prisoners of the state were held here throughout the dictatorship, many of whom were subsequently “disappeared” or killed. During the years of the dictatorship, the campus of the school continued to be filled with thousands of students and military officials, functioning normally as a school and place of work. However, in the upper levels of the Officials’ house, which overlooks the bustling Avenida Libertador, the detainees were kept in cells that measure one meter by 70 cm, little more than the average closet size, in deplorable conditions, lacking food and water, and unable to communicate with their fellow inmates. Many were forced to work for their captors, who realized that the political experience and knowledge of their prisoners could be used to create propaganda supporting the dictatorship.

In 2004, the Argentine government recovered the school and its grounds, turning it into the museum and place of memorialization that we visited this week. As usual, I arrived early to this field trip, stumbling off of an hour and a half hour bus ride with a cup full of coffee that I had been unable to successfully drink thanks to the abrupt lane changes and sharp corners made by the bus driver. I don’t entirely know what I had been expecting, but it certainly was not the buildings that were in front of me. Sure, I’d heard of the desaparecidos mentioned in passing in a high school Spanish class, maybe read about it online once or twice if it made the front page of the New York Times. But prior to arriving in Argentina I had never been forced to sit down and process the horrific human rights violations that happened less than 40 years ago in the city I was about to spend the next five months it.

The campus of the Ex-ESMA is nestled underneath skyscrapers, alongside one of the busiest streets in Buenos Aires. There is no concealment, no possibility for secrecy. As we made our way through the Officials’ house, where the detainees had been held, you could see the tops of the buildings from the windows in the cells. You could hear the sound of traffic: the faint murmur of the buses, cars honking, airplanes flying low overhead to land at the airport close by. The entire vile operation conducted in this building was no more than 100 meters from the street, 100 meters from civilians on their way to work or to the grocery store.

The dictatorship holds a unique place in the history of Argentina. On one hand, museums and memorial spaces like the Ex-ESMA continue to fight for justice and remembrance of the 30,000 victims of the repressive and violent regime. Argentina is the only case of a large scale prosecution of a former dictatorial government by a subsequent democratic government. The Trial of the Juntas indicted the majority of the upper echelon of the military dictatorship, beginning the slow process of reconciliation that continues today with trials against former executives of companies sympathetic to the dictatorship. On the other hand, the military refuses to turn over documents allegedly remaining from the time of the dictatorship, many of which concern the desaparecidos and other victims of the state-sanctioned terrorism. Some older Argentines that students have encountered dispute the number of victims of the regime, claiming it was closer to 7000 or 8000, or negate the existence of all desaparecidos. “They [the desaparecidos] all went to Spain anyways,” said one host mother.

The effects of the dictatorship and the state’s violence are still felt today and will continue to be felt for years to come. The grandmothers of the babies born in captivity, Las Abuelas de Plaza de Mayo, continue marching and fighting for the recovery of their loved ones. Families remember their lost brothers or sisters, parents, cousins. Visiting the site where many of those disappeared spent their last days was a powerful experience, one that proved the importance of remembering the atrocities in order to learn from them and move forward to heal the deep societal wounds. 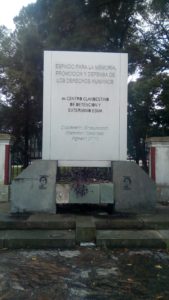 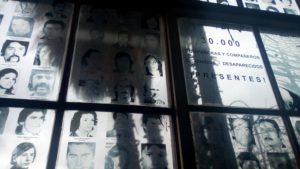