Hi everyone ! Sorry for the late update, but I actually got sick on the day that I would have been writing the blog. (Might be allergic to blueberries, it turns out).

So, what all has happened since last Friday? Saturday nothing really happened—except we took a test, that was great. So, if you plan on studying in Tianjin, just know that you’ll probably be taking a test. Then, on Sunday, we had a tour of the city! It was a lot of fun, and we went…a lot of places. The whole tour took about 8 hours, which was pretty exhausting near the end, when I wanted nothing to do with anyone.

The beginning, however, was fun. First, we went to this ‘water park’ which was pretty huge. We only had an hour to walk around, so a few others and I went to the left. We walked through some beautiful gardens that seemed to be Monet inspired, and also saw a lot of groups of dancing people.

Here is where the country music came in.

There were groups of older people square dancing to country music. American country music. It didn’t even sound familiar, though, which made it stand out even more. A lot of us were staring pretty blatantly because there was a lot we expected to see in China, but this? This was definitely not something we were looking for. When they spotted us, and noticed we were American, they waved and tried to flag us down, because y’know, Americans love to square dance. None of us went up, but it was still kinda funny!

After the water park, we drove around to look at the newer Nankai university, and an old culture shopping street which was super cool. A lot of things there were kinda cheap, though, and there was also the fact that there was a lot of beggars nearby, which dissuaded me from buying anything.

Another place we stopped was this “mall” that wasn’t really a mall, it was more for food rather than actual shopping. I went with a small group of girls to eat and, because I have very blonde hair, we got seated right by the window. We actually attracted people to come to the restaurant, and by the time we left, there was at least ten other people eating there! The lady running the restaurant also got very close to me and touched my back and seemed to really love me just because I was blonde.

More about being blonde in China: everyone takes photos and videos of you. It kinda makes the first few days extremely exhausting. I kinda wanted to cry sometimes, because it’s a lot of pressure to feel like everywhere you walk people will take your picture. I’ve adapted to it now, and understand a bit more why they might be so interested. Honestly, it’s just really hard to get used to. Not that I’m not flattered, but it’s just…overwhelming.

Back to the tour! The last place we stopped at that was fun was the ‘Italian Quarter’ it was really just fake Western things. I still plan on going back there just to see if the food there is all that Western.

After the trip, a group of us went to Karaoke! It was super fun! Especially considering I had never gone to karaoke before. At least, not like this. In America, the one time I went, I think I was a little girl, and there was just a dinky little television that was playing music I sang to. Here, there’s a flat screen TV, you get food and other snacks, and there’s even an attached bathroom. We all absolutely lost our minds half-screaming half-singing American music we loved. It was *extremely* fun! 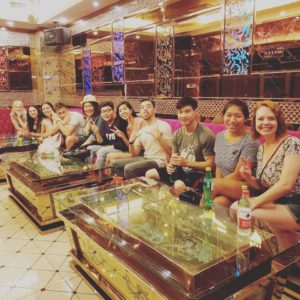 Finally, we reach our first days of school! Woohoo! I am in Conversational Chinese for my first few weeks, as well as Independent Study (which lasts the whole time I am in Tianjin). Every day in Conversational Chinese, I have a presentation—a  mini one—and then on Friday, I have a bigger one. For my independent study, we do different presentations every Tuesday. For this upcoming one, I’ll be talking about the differences between Chinese kung-fu movies, and American action movies. It’s a little bit overwhelming right now, but I’m sure I’ll adjust quickly!

A big change that I’ve noticed with myself as well as the group is that we have all completely adapted to the Chinese way of eating food: we are all sharing. At first, everyone was a little bit tentative sharing the same plates of food with chopsticks. A few of us wiped off the ends of our chopsticks before we got food from another plate. Yeah, that quickly went out the window. A lot of us don’t only share food, but drinks and everything. There is no fear in the Tianjin Travel Group.

This weekend, a group of people went to Beijing, as well, to have fun. I didn’t join in this time, still pretty scarred from being lost there for four hours, but it looks like they’re having fun! A few of them are even going to see Shaquille O’Neal. Who is apparently a DJ now. Who knew!

One of the most tedious things we’re dealing with is my poor roommate Morgan not having her ATM card. She had it rush ordered in America, but the stupid card didn’t reach in time—it got to her house two hours after she left for the airport!—and had to be shipped (again, rush order) to China. It got to Beijing TWO DAYS AGO but they’re still holding her card! So: order your ATM card or credit card or whatever EARLY. Because believe me: they are going to hold it for a long time and have to go through clearance.

Some daily life things that I want to bring up: the weather is hot hot hot! Today is the coldest day and it’s rainy, somewhere in the sixties. On Tuesday and Wednesday it was in the 100s! One of my classmates told me it doesn’t rain often here, but we have been here a week and it’s rained twice now, with three more days coming up that are still rainy.

Another thing is that every “American” food has a distinctly Chinese taste. For example, I bought myself some m&m’s today, and they tasted kinda like chocolate got painted…with paint. Very distinctly plastic-y, and I can definitely understand why they don’t seem as famous here as in America.

Anyway, that’s the most important things that I can think of today! I love everyone and will try to update soon. Seeing as I updated a bit late this week, I won’t be updating tomorrow, but will be updating next Thursday and Sunday. Have a great weekend!

1 thought on “Nowhere Can You Avoid Country Music”