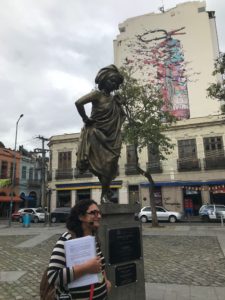 The Little Africa tour has been one of the most impactful events so far during my study abroad. There are places a person has to physically step into and live in order to feel the history it holds, and Valongo is one of them. Underneath the city, lies the horrors enslaved people were subjected to. From slave ports, markets, and unmarked mass graves, we walked on sacred land disguised as a modern city. In efforts to ‘beautify’ the city by whitewashing history, Valongo Afro-brazilian roots have been erased, along with its violent history left unrecognized. The Valongo Wharf is very telling of how little the community has been allowed to memorialize their history. Yet, like a planted seed, their culture has flourished through community and resilience, guiding the Afro-Brazilian resistance.

Street art decorate the walls in Pedra do Sal, the birthplace of Samba. Vibrating with historical figures, and black validation, the art contributes to the preservation of the quilombo community. The image above is a reflection of the power Valongo, as a united community, can have. Mercedes Baptista was the first Afro-Brazilian ballerina in the Theatro Municipal, making space for her community in predominantly white careers. The community organized, and demanded to have a statue in her honor. A statue of a black woman in Valongo has been an empowering move, yet it is not enough. Afro-brazilians deserve to have more than a square, a plaque, or a single statue. A community that has survived erasure, deserves reparations, memorials, and overall respect for their loss and flourishment. Grassroot projects are taking initiative, and bringing awareness to this injustice.