Two weeks ago I was lucky enough to travel to Mendoza, Argentina, for a week with my friend Katie. After the slight debacle that was our rushed Patagonia trip, getting lost in mountains and making the worst spaghetti I will probably (hopefully) ever eat, Katie and I decided we’d take things slow and actually plan this trip for a change. With our hostel booked, a tentative plan for the week, and backpacks and bags overstuffed with too many pairs of shoes to justify for a six day trip, we were off Wednesday night.

Thursday was our day to really get ourselves straightened out. One visitor’s center trip later and we had gotten some bad news: the trek that we wanted to do to the base camp of Mt. Aconcagua, the tallest mountain in the western hemisphere, was closed due to “incliment weather”, which apparently means anytime it drops below 60 degrees and there’s a bit of wind rustling the leaves on the trees. Upon further investigation, we also realized that said mountain was a four and a half hour bus ride outside of the city of Mendoza, making this trek even more infeasible. All was not lost however: after about an hour of barraging the woman at the vineyard tour agency with questions ranging from “will I be able to tell a difference between boxed wine and the wine from these vineyards” to “about how much food is a five course meal”, Katie and I talked ourselves into purchasing a $200 wine tour tat was far above our pay-grade and far above our knowledge of wine. Thursday night we decided to do a short hike that our friends from IFSA had told us about before we left that had a great view of the city. Halfway through this hike, to which I showed up for wearing jeans and a sweater (I was under impression this was going to be a very short excursion), we decided enough was enough, we were not in shape enough for a full on mountain trek. We did, however, run into some semi-wild horses on the way up.

Friday we had booked a tour through the Andes Mountains, which ended up meaning we were on a bus with five or six middle aged to old couples, dressed to the nines and documenting the trip by narrating the videos they were taking from the windows of the bus. On our tour through the mountains, we stopped at an Incan bridge, Mt. Aconcagua, a lake in the mountains, and an old ski resort. While the tour wasn’t quite what we were expecting, as we were told to dress warm and prepare for some hiking, the views of the mountains were gorgeous. Saturday was our rest day between the bus tour and the wine tour, two things that realistically took very little effort but still required a rest day in-between. We decided to head to the hot springs which was, to our surprise, also full of lots of old people. The hot springs were also semi-closed to do it being winter here, which apparently means that water flowing from the mountains decreases? Neither of us were entirely sure how that worked or where the water went, but the pools that were open were a great temperature, had great views of the mountains, and were the perfect way to spend a leisurely Saturday afternoon.

Sunday was the day of all days: three vineyards with guided tours, one five course meal, a private van chauffeuring us around the Mendoza countryside, mountains on the horizon and ruby colored vineyards in the foreground. Our day started at 8:30, our first vineyard was at 9:30, and by the time afternoon came around Katie and I had fallen in love with all things wine-related. We were accompanied by two lovely women from Australia and our wine guide, who explained how wine was made and the unique characteristics of each bottle we tried. At the end, our five course meal was paired with different wines, topped off by authentic flan and a piping hot cafe con leche.

Our last full day, Monday, was also spent outside the city limits, this time in search of an olive oil factory that we could tour. After accidentally getting off the bus 5km prior to our destination, we took a nice stroll through vineyards and trees. Finally, we arrive at the olive oil place, take a quick tour, and sit down to a spread of olive oil, balsamic vinegar, bread, and spreads. While it maybe wasn’t worth the hour and a half long walk, I had never seen an olive on a tree before, nor had I really thought about how olives grew before, so it was an experience if nothing else

Tuesday morning was painful: our flight was at 7:20, which when booking the tickets didn’t seem to be as early as it did when the 3:45 am alarm started sounding and we realized we had yet to finish packing. Lugging our bags though the deserted airport, we made it to our plane and back to Buenos Aires before 10 am and, more importantly, before our afternoon class.

Mendoza itself was a 180 from Buenos Aires: it was calm, had sidewalks that seemed to get wider the longer you walked which, in comparison to the narrow walkways in the center of Buenos Aires was a luxury, and had one of the most gorgeous backdrops I’ve ever seen with the shadow of the mountains touching the tops of the buildings. Leaving Buenos Aires for Mendoza felt like a breath of fresh air; there was more room to breathe and a silence at night replacing the ever-present honking of car horns of yells of the men collecting garbage at 2 am on a Tuesday. Leaving Mendoza for Buenos Aires felt like a sharp inhale preceding a return to a place that is brimming with energy, people, sights to see and places to go. It was a ‘welcome home’ from Buenos Aires, but it was also a reminder that we only have four short weeks left before we will be saying goodbye to our semester and our lives in Buenos Aires and jetting off to our respective cities in the United States. 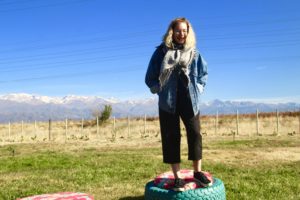 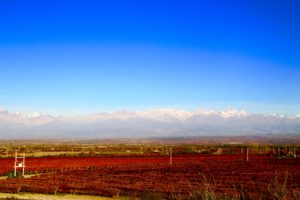 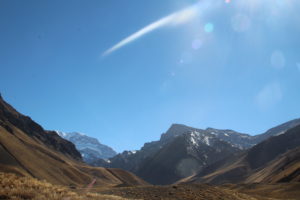 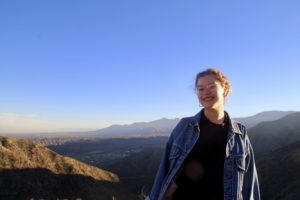