I’m approaching the last leg of my time in Buenos Aires (9 days left to be exact) but if there’s one thing I’ve learned about the city while living here it has been that there’s always something big going on. This month has been dominated by two things: the world cup and protests. Protest culture here is very unique in that it seems like there is at least one protest a day, people turn out by the hundreds almost every time, and almost every time the protest seems to be dealing with a different issue. At the beginning of June, the Argentine Congress voted on a bill that would legalize abortion up to the 14th week of a pregnancy and which would make it mandatory that abortions were a free procedure available at the public medical institutions. The actual voting took place almost 24 hours after the session opened in Congress because the representatives each got a small amount of time to give a speech on the issue, either to explain their vote or to try to persuade their colleagues to vote a certain way. Argentines came out in full force, holding a vigil the entire night until the vote at 7 am the next morning. Thousands of students, women old and young, and families filled the main plaza in front of the Congressional building, wearing and waving the green banderas emblematic of support for the new law, and chanting “aborto legal ya”. With a margin of just four votes, the bill was approved, and awaits a vote in the Senate at the beginning of August.

Another wave of protests commenced shortly after those regarding the legalization of abortion, and have resulted in multiple “paros” or strikes of varying sizes. The new wave of protests have to do with the economy, which has been going steadily downhill for the past month or so. Before I left for Argentina, I went to at least three different banks in an attempt to get Argentine pesos but was told three times that the banks had stopped carrying pesos because they were too volatile a currency. Naively, I chose to not believe them: google said that the peso had been hovering around 20 pesos to every dollar for a relatively long time. When I arrived in Buenos Aires and up until the middle of May or so, the peso stayed at this exchange rate. However, around the end of May or beginning of June, the peso began devaluing at a fairly rapid rate. The devaluation of the peso and the inflation has a lot of Argentinians angry, and rightfully so: their rent increases, their salaries decrease, and their overall savings decrease because their money is worth less.

In order to combat this problem, President Macri has chosen to take out a 50 billion dollar loan with the IMF, a controversial decision made by an already very controversial political figure in Argentina. This decision, combined with the devaluation of the peso has caused thousands to take to the streets, with these protests culminating in a “paro nacional” which took place on June 25th. A “paro nacional” means that everything nationwide stops: banks are closed, no form of transportation, including taxis and airplanes, are functioning, stores are closed, people don’t go to work, schools are closed. For someone not used to strikes in any capacity, let alone strikes of this magnitude, it was shocking to not only experience the buildup to the paro, which was announced and discussed on every news channel each night leading up to the 25th, but also to see how people dealt with the entire city being shut down. Realistically, I had nowhere to be on the 25th and my little supermarket was open for me to go grab a snack, so it felt like any other Monday for me. But talking to my host mom and listening to news analysts discussing the strike, seeing videos of a deserted downtown, and realizing the ramifications of the economic downturn that the protestors were mobilizing against was a unique experience that reiterated the deep political divide in this country right now as well as the necessity to fix something in the economy to stop the devaluation of the peso.

On a cheerier note, June also marked the beginning of the world cup, which, in case you didn’t know, is a huge ordeal in Argentina. Since May, the city has been constructing big screens where people can go watch the games, there are blow up soccer balls scattered around the city center, and when Argentina plays you can hear the yelling of fans from blocks away. One of the screens set up by the city is in Parque Centenario, a quick ten minute walk from where I live, and where I have watched two out of the three games. Although Argentina was projected to do very well in the tournament this year, they got off to a shaky start, tying Iceland after a relatively unimpressive performance from national hero Lionel Messi. Their second game against Croatia ended up in a loss, meaning that their last game against Nigeria was a must win, otherwise Argentina would be eliminated from the tournament without even getting out of group play.

Tuesday afternoon, the amphitheater in Parque Centenario where the game is shown was buzzing and full to the brim with families, students, and a lot of middle aged men, all awaiting the beginning of the game with mate in one hand and their Argentina flag in the other. Messi, who had been scoreless throughout the first two games, scored his first goal against Nigeria, and I have never seen a crowd more thrilled after a goal than in that moment. After the first goal, Argentina was up 1-0, and I could breathe a bit easier. Unfortunately for my blood pressure, Nigeria scored a quick goal, tying the game at 1-1. Coming down to the last ten minutes, it wasn’t looking good for the Argentine team. Expletives were flying through the air after every call the ref made against Argentina and the elated chanting had died down. Miraculously, with about five minutes left of the game, Argentina scored another goal, securing the team’s place in the round of 16. Their next game is Saturday morning, and we have already been advised to get to the park very early, otherwise there won’t be seats. One can only hope that Messi and his team show up ready to play. 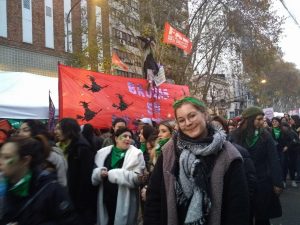 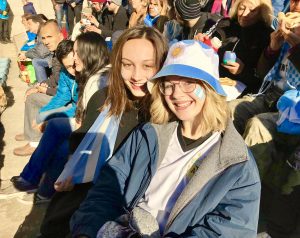