On Tuesday, June 19 our group took a trip to the Sugarloaf Mountain, which is one of many monolithic granite and quartz summits that you can see rising up at the water’s edge in Rio de Janeiro. The Sugarloaf Mountain (in Portuguese Pão de Açúcar) refers to its resemblance to the shape of concentrated refined loaf sugar. Before coming to Brazil, I knew that the Sugarloaf Mountain was widely known for its cable cars and its breathtaking views of the city. However, I wasn’t quite aware of how beautiful the sunsets are from top of this gigantic mountain. We began our trip up the mountain in a short cablecar ride which brought us to see the famous scenic views. From the highest point, you can look below at the sailboats docked in the Botafogo Bay, all the buildings and streets, the other mountains, and even the Christ the Redeemer statue! In addition to the views, our group made some new friends—marmoset monkeys! These little creatures who were seen in abundance throughout our excursion were very friendly and not the slightest bit camerashy. Being on top of Sugarloaf Mountain really felt like being on top of the world because we could see the entire city of Rio de Janeiro through a new and spectacular view. 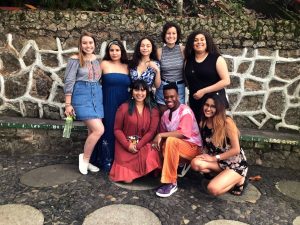 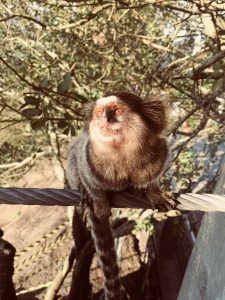 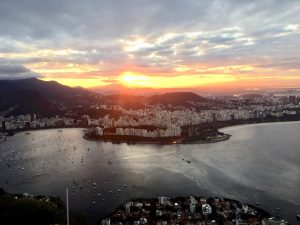