On Sunday June 10th, we went to support the Flamengo soccer team at their home, the world- renowned Maracanã stadium in a game against Paraná Clube (a team from southern Brazil). As we waited close to the stadium many of us wanted to show support for the home team and so we bought some Flamengo jerseys to wear for the game. Walking up to the stadium prior to the game brought so much excitement as the students were amazed at the beauty of the stadium knowing that it was the second largest in all of South America. As we got closer and closer to the stadium, the cheering got louder, the amount of red jerseys increased and the endless chants began. Throughout the game, it was so clear how much love the fans had for their home team as the stadium filled up with a sea of red jerseys. We were happy to be able to rock the red jerseys and support the team and the thousands of fans in the stadium. As every moment passed, the fans would cheer, sing chants, and even did the wave. We joined in as much as we could, trying to catch onto the Portuguese chants and participating in the wave as it went around the stadium. It was amazing to see how each goal brought a rupture of excitement that filled up the stadium as the fans and the players celebrated. Both teams had their good moments but the home team took the victory with a score of 2-0. It was truly an amazing experience for us! 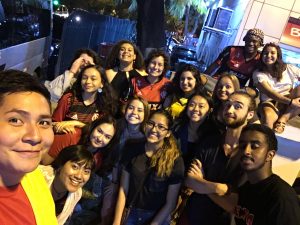 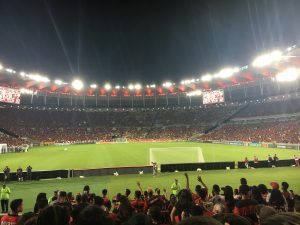