On the late afternoon of June 18th, we went to Bateria Furação Azul at the foot of Santa Marta, for a lesson in samba drumming. We were accompanied by Professor Sanchez, Vanessa and Matheus from the CIEE and two UW administrators who were visiting for a few days, Matt Geisler from International Academic Programs and Derek Kindle the director of the Financial Aid office. We stepped off the Botafogo metro exit and made the ascent to the school. Upon arriving, we were introduced to a real performance of samba drumming. After such a coordinated performance, the following performance was just as stunning.

We were divided into five different groups, each with a type of percussion instrument, ranging from very large drums to handheld tambourines. I can’t keep a beat, so I’ll accept the gamut of the blame for all following dissonance. Gloria hit her hand; I did as well. Malina, comparatively, was a natural. While some difficulties were had by most, if not all, upon meshing into the larger group, the drumroll synchronized. It’s a rare thing to get thirty people drumming to the same beat.

After a brief respite involving cake and refreshments, we all participated in a brief samba ring.  Mahad cracked out some truly disjointed moves (he is double jointed, but I’m convinced there is a third joint in there somewhere). It was a wonderful break and it set a carefree mood for the following drumming. To beat a dead horse, keeping tempo together was unique, and something I’ve failed to do in the best. It was meaningful for me to have such an experience, and I’m certain that it was for all else involved. 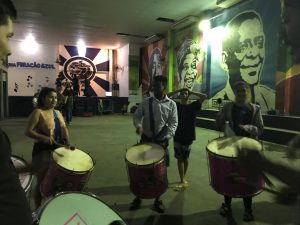 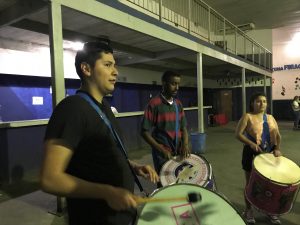 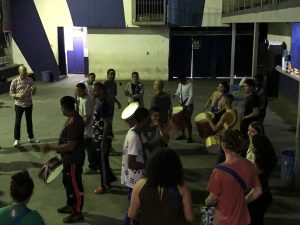 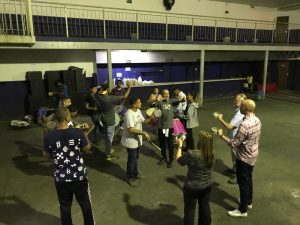