Tomorrow I start my second “semester” of Chinese, which means that six weeks have already flown by. I think I say this a ton, but it’s crazy to think of everything that we’ve done in such a short span of time.

That sentiment has felt especially true as we just recently returned from our weeklong break. This time is a wonderful opportunity to get out of Tianjin for a bit and explore China. My break had some hiccups along the way, but I had an absolutely amazing time.

Friday afternoon, we caught our gaotie (high speed train) to Xi’an. The journey was around 6 hours, which was long, but not unbearable. As soon as we exited the subway station, I knew that I would love Xi’an. We were in the middle of the city around 11 at night and the Bell Tower and surrounding buildings were lit up and so beautiful. Saturday, we toured the Bell Tower and Drum Tower, two old towers in the city center. While originally built in the late 1300s, both buildings were destroyed or seriously damaged, so the structures now are carefully reconstructed to preserve the original culture and beauty. We were also able to see a performance of traditional Chinese music at the Drum Tower, which was a cool experience. In the afternoon, we ventured to the Muslim Quarter, famous for its food. The area is fairly commercialized, but we were able to try some authentic Xi’an cuisine and also tour the Xi’an Great Mosque, the largest in China. It was a wonderful escape from the narrow and bustling streets, as the Mosque itself was practically empty when we toured.

Around 6pm, we headed to my favorite of Xi’an’s attractions—the city walls (西安城墙)! Walls just aren’t something you see very often now, and I didn’t realize how tall and thick they would be. It’s crazy to think of how they were built: entirely by hand, from crafting the bricks to laying them and everything in between. A popular way to experience them is via bike, which we readily embraced. This was my first time riding a tandem bike (special thanks to Maddie for steering!), and I really loved it. It was a wonderful way to watch the sunset and see some more of the city. That night, we also had biang biang mian, another Xi’an specialty. The character for “biang” is the most complex character in Chinese, with almost 60 strokes. The noodles themselves are incredibly long and thick—and delicious! They were definitely my favorite of the foods we tried in Xi’an. All in all, Saturday was an incredible day, and was my favorite day that I’d spent in China—until Tuesday!

Sunday, we saw the Terracotta Warriors (兵马俑), which I thought was absolutely incredible. I really can’t describe how I felt looking at them. I had heard people say that the Army was underwhelming, but I didn’t think so at all. Looking at all of the figures in the First Pit, seeing the incredible detail, and realizing that no two are the same is something that has to be experienced in person. Similar to the City Walls, they were built all by hand and were finished around 201 BC. I had a conversation with one of the girls that I went with, where we both expressed the idea that we felt bad because we couldn’t mentally grasp the entirety of what we were seeing and how long ago (well over 2000 years) they were carved. And there are still some that have yet to be excavated!

Tuesday was probably the coolest day of my life. We spent Monday night in Huayin, a city at the base of Mt. Hua (华山), the western mountain of the Five Great Mountains of China. While there are multiple ways to reach the peaks (all five: North, Central, East, South, and West), including a cable car, the path starting from the bottom and climbing all the way to the North Peak is the traditionally followed path, often translated into English as the One Way Up Huashan. This was the route we took, starting at a bit past 6am. The hike was insanely beautiful, and I am so grateful that we choose to “hoof it.” While it was a very challenging hike up and around to all the peaks, it was definitely worth the experience. Typing out everything that happened would warrant its own blog post, but suffice to say I was overwhelmed with the generosity of Chinese people, the power and glory of God, and the ancient history of Chinese civilization. Standing at the South Peak, the highest of the five at a bit over 7,000 feet, was a feeling completely unto itself. 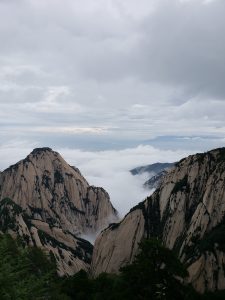 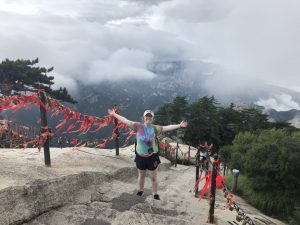 Wednesday was where things started to go awry. We planned on taking another bullet train to Chengdu, Sichuan Province (home to the pandas!), but severe weather in parts of Sichuan caused many trains to be delayed or cancelled, meaning we couldn’t make it. After a few tense hours spent trying to sort out our options, we hopped on a train to Luoyang, about an hour and a half from Xi’an.

Thursday morning, we explored the Longmen Grottoes (龙门石窟), a series of artificial caves and carved reliefs featuring Buddhist art. It’s said that there are over 10,000 images throughout all the caves, and I definitely believe that after seeing it for myself. The carvings range in size from just palm-sized to the Vairocana Buddha, over 17 meters tall and thought to have been carved in the likeness of the famous Empress Wu Zetian. This was a really cool day trip and a good way to end our break before heading back to Tianjin a little ahead of schedule. 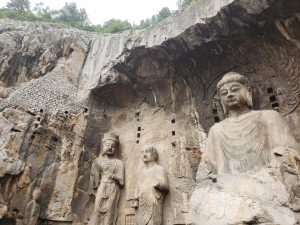 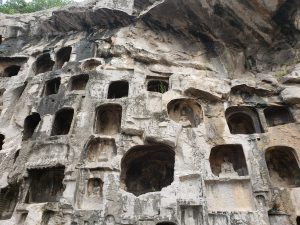 Overall, this break was certainly the highlight of my time in China so far and one of my favorite weeks that I’ve ever experienced. I saw new cities and ancient temples, met new Chinese (and Australian!) friends, and tried some delicious new foods. This week really cemented in my mind that I’ll definitely be coming back to China—there really is so much more to see.