It’s August! That means so much for us here—we need to start preparing for our final, planning how to spend our last few weekends, and, maybe most importantly, that we’ll be home soon (at least most of us!)

This program has been such an amazing experience for so many reasons. The opportunity to live, study, and travel in China for almost three months with people who have quickly become some of my best friends is not something that happens frequently. I guess that’s why so many people call their study abroad experience “once in a lifetime,” and they’re not wrong. It’s been so much fun, and I would be lying if I said that a part of me is wishing for just a few more weekends. But it’s also been a LOT of work—they don’t call this program an intensive for nothing, and if you’re looking into coming to Tianjin in the future, you should understand that you’ll be devoting a significant amount of time every day (for me, usually upwards of six hours) in class, going to tutoring, studying, and doing homework. It’s worth it though; my Chinese has continued to improve more and more, and it’s so interesting to see my own progress.

And I’ve definitely made use of the weekends I’ve had left this session. The last weekend in July I went to Beijing and got the awesome opportunity to meet up with one of my new friends Rachel. We met in Xi’an on our weeklong break and became fast friends. It was great to see her before she heads back to her home in Australia. It’s cool to think about keeping up with her and her adventures down under, and I know I’ll be visiting her in the future. We went to the Silk Market to grab souvenirs, then walked around Beijing and got to see the famous CCTV building that lots of people think looks like a giant pair of pants. 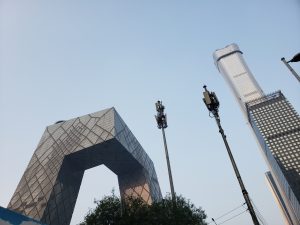 Saturday, we had an early morning at the Temple of Heaven, which was beautiful. This is a great place to visit if you want to see different styles of Chinese architecture. We also found it to be an excellent place for a morning stroll, as the complex also includes large gardens and paved walkways lined with trees. The entire palace grounds are actually larger than the Forbidden City, which is not an easy feat. I’m a huge flower fan, so I really enjoyed the rose garden, and would recommend it for future visits. After grabbing lunch, we then headed to Lama Temple, which I consider one of the more interesting things I’ve seen in Beijing. There weren’t many tourists—in fact, most people I saw were praying, as it’s still an open, practicing Buddhist temple. I don’t have many pictures, as I’ve heard before it’s bad taste to photograph Buddhist temples, but it was truly beautiful and was definitely worth the 12 kuai ($2 USD) entrance fee—gotta love student discounts! We also tried a traditional Tibetan dish of tsampa, or barley, and yak yogurt, which was DELICIOUS. I crave it. Yak yogurt is creamier and has a different taste than cow yogurt and is very good. 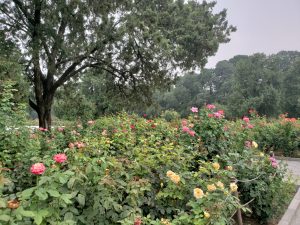 We also went on a very cool 采风 this past week—to a Chinese book store! It was interesting to just walk around and look at everything. I bought a copy of The Lion, the Witch, and the Wardrobe in both English and Chinese. Reading that will certainly take some time; I struggled to read children’s books.

This past weekend I finally went to the Great Wall! Hard to believe it took me so long to see arguably the most famous attraction in China. We decided to go to the section closest to Tianjin, Huangyaguan, named for the yellow mountain rock. This section is fairly remote, and there were very few tourists. The Great Wall is another one of those things that’s hard to comprehend—it’s a sort of surreal feeling to walk on a wall that millions and millions of people died to build so many years ago. The Wall is definitely a must for anyone who comes to China, and whatever section you go to won’t disappoint. It was also cool to celebrate Sarah’s twentieth birthday on the Wall! 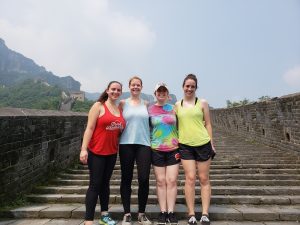 Less than two weeks until I’m back in the US. I think that I might arrive before the postcards I’m about to mail will!