This was my most spontaneous trip during my time in Japan. I had originally planned to celebrate the week of my birthday by going to Wakayama Adventure world which has five pandas! However, as the week approached, I felt like I wanted to do something more than a day trip, and just two days before the weekend I decided and booked a trip to Kamakura!

Kamakura is a coastal city about an hour away from Tokyo. To get to Kamakura, the best way from Osaka is to take the Shinkansen to Yokohama, and then take a local train 20-30 minutes into Kamakura. I arrived in Yokohama bright and early at 9AM so I could spend the morning exploring Yokohama. Yokohama is the second biggest city in Japan (practically just a suburb of Tokyo with many people commuting between the two every day) and is famous for having Japan’s largest China town!

Besides the China town, Yokohama is a port city with a long park full of flowers on one side and the sea on the other. 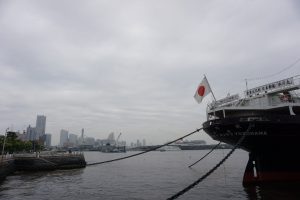 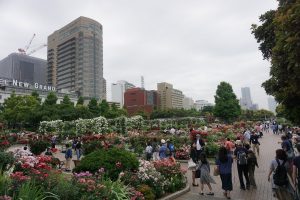 After spending a few hours here and seeing all the big sights, I traveled the half an hour by local train to Kamakura and even though it is only 30 minutes south, when you step out everything feels different. It’s warmer, you can smell the salty breeze, people are dressed like they are on vacation with flip flops and sun hats. With everything I need for the weekend on my back I headed straight for the beach where a long, quiet stretch of white sand preceded a clean, shallow beach.

Nearby, was the hasadera temple and famous kotoku-in temple (big Buddha temple). Kotoku-in’s Buddha isn’t nearly as big as the one in Nara, but it is the biggest outdoor one in Japan, and I think because it is outside with natural light shining on it you are able to appreciate it much more. 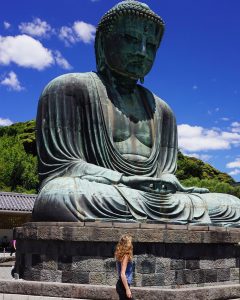 Finally I decided to try some of famous hiking trails in Kamakura! A tourist guide gave me instructions and a map of where to go. There are three different trails, all going between the different temples: one hour long, two hours long and 30 minutes. I chose to start off with the one hour one with its beginning near the big Buddha, and complete the other two the next day. However a one hour hike turned into 3 as the trail kept disappearing, branching into three trails without any indication which one to follow. Eventually I gave up and just followed the main road with cars to make it to the next two temples I wanted to see just as they closed!! So much for good hiking trails, but the parts I did hike were phenomenal with great views and I even ran into a bamboo forest at one point (one of the many dead ends).

The next day headed out bright and early to try the 30 minute hiking trail to hokoku-ji temple, famous for its bamboo forest. However, as you can guess, the hiking trail disappeared and left me in the middle of a forest, so I had to head back and get there by bus.the temple was on the outskirts of the city, but it was so worth it! I got there right as it opens and it was almost empty so I could take tons of pictures with the bamboo. 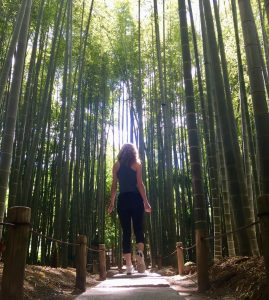 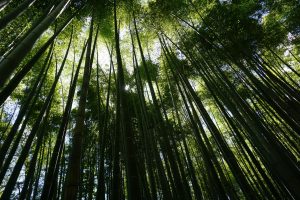 I think t was prettier here than in Kyotos more famous bamboo forest because there are less people and it is more packed if bamboo, even if it is smaller. As more people arrived, I went to go get traditional matcha at the tea shop right in the center of the bamboo forest. 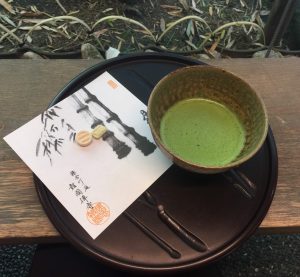 An hour into the temple opening, it was packed and so I headed out. Pro tip is to get there early.

I spent the entire rest of the morning just relaxing on the beach with a healthy smoothie drink (Kamakura is a very small city), then early afternoon I went souvenirs shopping around the main train station before heading to visit the two temples I missed the day before, both lovely gardens: jochi-ji and engaku-ji temples. 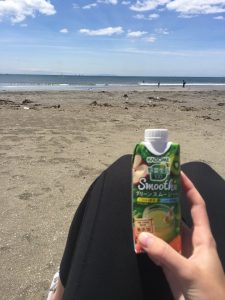 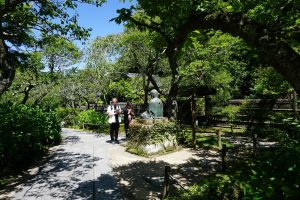 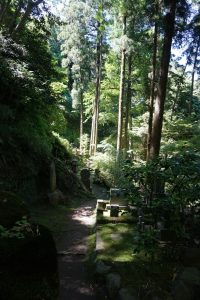 I spent a few hours here before I had to head back to Yokohama for the Shinkansen, but I couldn’t have asked for a better way to end the weekend by relaxing in nature.

Kamakura competes with Kyoto in how many temples per area it has. Even though it is smaller, I loved that there was both beach and forest, temples and shopping all while being less busy than Kyoto! 10/10 would recommend.