The first week of May in Japan is called Golden Week (surprisingly even in Japanese it is called Golden Week). Golden Week is a compilation of national holidays that all just so happen to fall on the same week. Technically, only three or so of the five work days are national holidays, but everyone takes off the entire week anyway even if they don’t have travel plans. I decided that for an entire week I should travel beyond Japan, and so decided on traveling to Korea! It’s only a 2 hour flight from Osaka, and so it took no time at all before I entered one of the most beautiful airports in the world, famed for its eco friendly architecture and immense facilities: Incheon Airport.

I booked a hostel near Seoul Station (about an hour train ride from the airport) but the hostel left much to be desired. I suppose I get what I paid for, so at $40 a night I shouldn’t expect much but the bathroom sink was attached to the shower, and so any time I turned on the sink, the shower would automatically turn on and soak me. Needless to say, I spent minimal time in the hostel, trying to find coffee shops in if I needed to kill time.

The first day I had planned to see both the palaces in Seoul. Temples aren’t nearly as common here because they are a Christian country, so these temples are some of my only chances to see traditional Korean architecture. The first palace I went to was a little underwhelming, but the Geongobuk palace more than made up for the first. 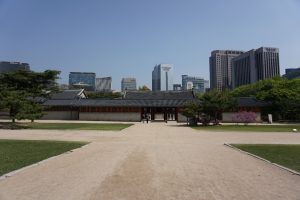 The Geongobuk palace was massive, with intricately painted beams with the colors of the rainbow. 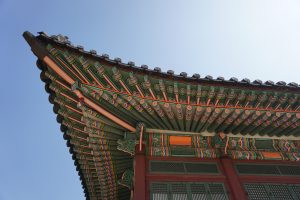 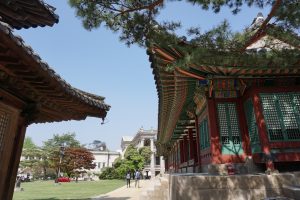 Everyone seemed to be wearing Hanboks, traditional Korean garbs (similar to kimonos in Japan) and I soon found out why because they were only $10 to rent for 3 hours! By wearing a hanbok, you also got free admission to all the temples, so I indulged myself and rented one. 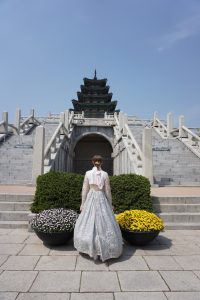 After renting the hanbok, I went back through Geongobuk palace, and the adjacent Bukchong hanbok village. 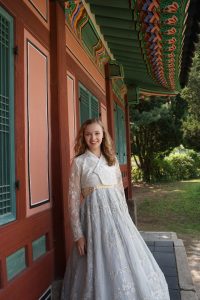 The last stop of the day was Insadong, a big nightlife area full of knock off designers, makeup and endless food stalls. Here I tried so many different Korean foods, including an Oreo churro and this egg and cheese bread bun. All of them were delicious. 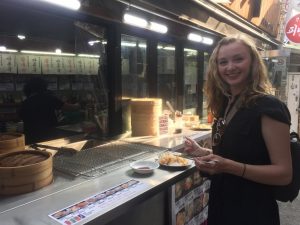 The next day only had three things planned: Seoul tower, Gangnam and Namdaemun market. Seoul tower was a little scary because you couldn’t actually see much of the city because of all the pollution haze! It made me invest in a high quality mask so I didn’t breath in too much pollution. 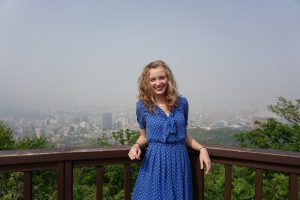 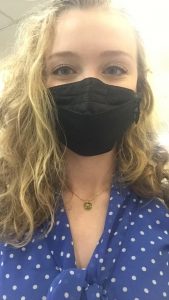 The Gangnam area I had to go to because of the song Gangnam style which was written about this supposedly high end fashion area. However, compared to Shinsaibashi of Osaka, I was rather underwhelmed. The closest to high end fashion stores was some shoes store that sold a few different designer shoes like Adidas or Nike. Shinsaibashi sells Louis Vuitton, Gucci, Tiffany and co., an entirely different level of high end fashion. 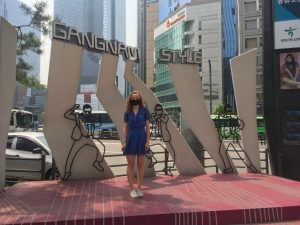 Finally was namdaemun market, an artsy area known for tea rooms and handmade crafts. I spent the evening sipping on a mango smoothie overlooking the crowds going up and down the street. It was a great end to the day, especially with how humid it was the mango smoothie was the perfect cure. 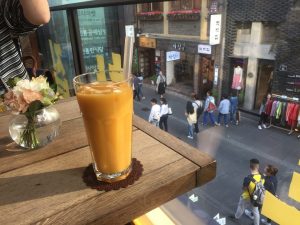 The final day I had run low on things to do, so spent the entire morning at a Korean barbecue! It was a very fancy restaurant and, like all the Korean food I had tried so far, was quite spicy, but I got to cook the beef myself and so I didn’t add any spices! 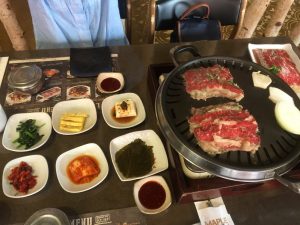 I took a rest in midday so I would have the energy to spend the evening in Dongdaemun night market. This is a huge nightlife area, with food and shopping everywhere. 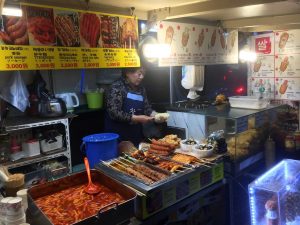 On day four I spent the morning taking the Korean Shinkansen to Busan. Only taking 2.5 hours (the same time between Osaka and Tokyo) the train went perhaps half the speed. Apparently, Korea’s Shinkansen is actually from Japan, but they are much older models with a little less leg room and slower top speeds.

Once arriving to Busan, I wanted to make the most of my time there! I researched a lot of how to get around Busan, and everyone seemed to recommend taking the tourist bus so you could also see a lot of the coast and sights while you drive! It was a little cold and the clouds hung very low, constantly threatening rain, but I persisted and began my adventure in what Korea calls the “Santorini of Korea”. I don’t think I would go that far to describe the area, but the views were pretty stunning, and it was my first chance to glimpse the sea in Korea. 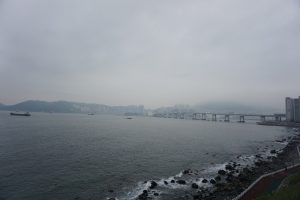 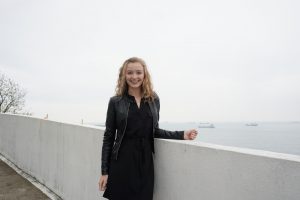 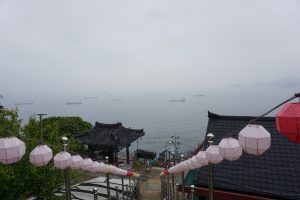 Afterwards I traveled to the okinoin islands, a series of five large rocks in the water. 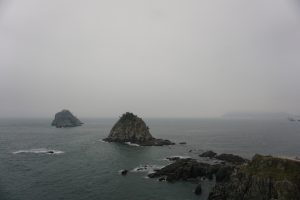 The following day, I woke up bright and early to visit the gungcheong culture village. It was absolutely stunning. 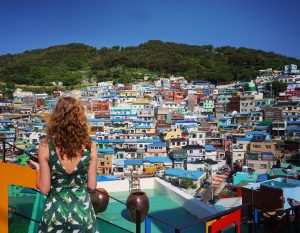 I spent a good few hours here, exploring , taking in the views, eating waffles, and also buying some socks (Korea has super cute socks for only $1 a pair!). 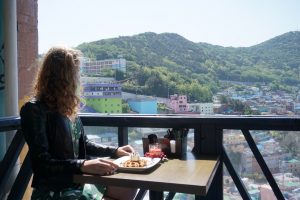 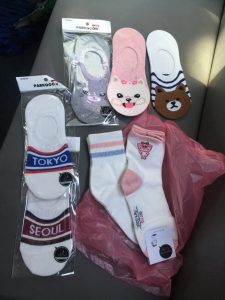 The next stop were two beaches: Gwangali and Hyundai beach. Both were beautiful, but I would have enjoyed them a bit more if it was warm enough to swim there. 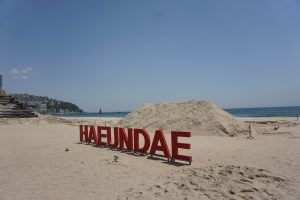 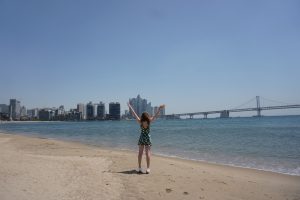 In the evening, I headed back to Gwangali beach, because it is known as a lively night beach. It did not disappoint with the sheer number of bars, lights and all the musicians playing along the beach, many singing k-pop songs. 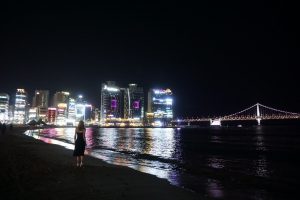 Unfortunately the next thing I knew I was back in the Korean Shinkansen to go to Seoul for my flight back home. Seoul was nice, but Busan was an unexpected delight. I did not expect all the colors and liveliness in the city.