Hiroshima is one of those places everyone wants to go to because of its historical significance in world war 2, little do many foreigners remember there is more to Hiroshima than the atomic bomb. I myself fell into this trap and planned a trip to go to Hiroshima to see the atomic bomb museum and surrounding world peace park. However, when I mentioned to my coworkers that I was going to Hiroshima, they excitedly mentioned that it is also the home to a famous island temple in the water: Miya Jima.

After the meal, we proceeded to Miya Jima Island, Home of the famous Miya Jima temple standing on water. It didn’t take that long to get there, but other than look at the temple and eat some local treats there wasn’t much to do on the island so after an hour we headed back. It was definitely worth while to see (though surprisingly there weren’t many foreigners there only Japanese tourists) but my coworkers were right when they said it wasn’t worth staying longer than an hour. 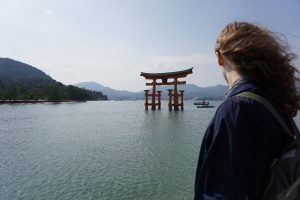 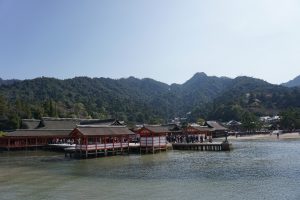 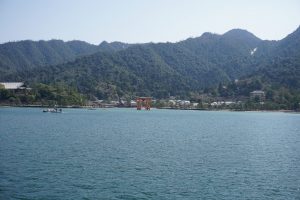 The next stop was the more well known Hiroshima atomic bomb museum and surrounding world peace park. As we approached the museum, this out of place metal caged dome emerged from the trees. It was just the backbone of an old building, and so I didn’t understand why so many people were taking pictures of it! Embarrassingly, it was only later at the museum that I found out this building was purposefully left from ground zero after the atomic bomb detonated as a reminder of what happened. 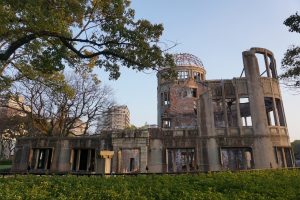 The museum was very well set up with the first half including images of before and after, video statements and written testimonials of victims of the atomic bomb as well as family members if the victims did not survive. It also included articles of the victims such as clothes they were wearing when the bomb dropped (which were essentially tatters). Every story made me feel more hollow, and at the end of this section of the museum if people were not crying they were aimlessly staring at the floor or wall from numbness. The second half of the museum, however, ended on a positive note on how we can prevent future atomic bombs and nuclear weapons. Since the atomic bomb, Hiroshima has made a stand against any nuclear weapon making and regularly hold sit in protests (some including the prime minister) when a country announces it plans to make or use nuclear weapons.

After the museum, stepping out into the beautiful World Peace Park was a warmness I needed to lift my spirits slightly. I was surprised how many foreigners there were in this area, especially since there were close to none at Miya Jima, but it made me happy that so many people are taking an interest in the events that happened in Hiroshima so that global awareness is raised against the use of nuclear weapons.

Hiroshima is beautiful and blew my expectations away. It is quite far away (and quite expensive to get to) but it is a must see even if you are in Japan for a short time.