I’ve been here in Korea almost 3 weeks now and the time has really flown by. I’m just now beginning to feel like I’m really going to be here for the next few months and not just a few weeks as a tourist. I’ve already done and experienced a lot in these first two weeks.  I’ll try to summarize my thoughts and feelings thus far. Just a warning this post may be a bit long!

My feelings upon arriving at Incheon Airport and taking the bus to my friend’s city of Daejeon (대전) were mostly feelings of disbelief, bewilderment and the expected anxiety that comes with moving to a foreign country. My first few days, as I slept and ate off the jetlag, I kept having moments where I would suddenly stop and ask myself “How did I even get here?” or “Am I dreaming??” Despite this being my second time in Korea it all felt surreal to actually be here again. 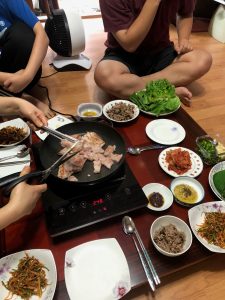 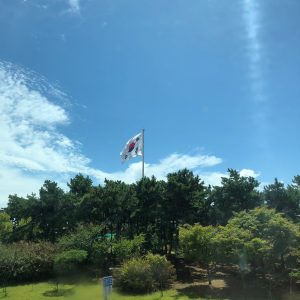 Now after being moved into my dorm room for two weeks these feelings have mostly faded away. That being said, though I’ve accepted it, I can’t help but feel a little out of place in a country where I look pretty different from everyone else and barely speak the language. But of course that’s a part of the experience too. Still even the small amount of language skills I have and my previous experience with the culture has been helpful for my own transition. Because of that there have been a lot less surprises/culture shock experiences right off the bat. For example I wasn’t too shocked to find my bathroom doesn’t have a separate shower. It’s all one room so when you take a shower the entire bathroom gets wet so you have to use slippers so your feet/socks don’t get wet. I wasn’t too surprised either when crossing the street and the cars really don’t yield to pedestrians unless you force them to. Additionally, as a deep lover of all Korean food, the cuisine has not been a shock to my system.  I think the longer I’m here more cultural differences I didn’t know about or notice before will pop up.

As I’m writing this I’m finishing my first week of classes at Ewha Women’s University (이화여자대하교). Ewha University is a really beautiful campus with a lot of really nice buildings and facilities. Most of the buildings are located at the top of a hill and all my classes are in just two buildings so I haven’t ventured all the way around campus. The most notable building on campus is the Ewha Campus Complex, which has a really interesting design (pictured below). I spend a lot of my time in this building. It has classrooms as well as restaurants, café’s, a gym, bank and more. 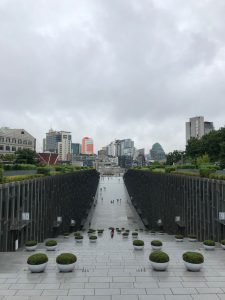 I’ve both been meeting a lot of new people while simultaneously seeing a decent chunk of familiar faces. It’s been an interesting experience meeting up with a lot my Korean friends here since when I met them it was all back in the states and now here I am in their home country as the foreigner. I’m thankful to have had some friends here helping me to get settled. It’s made the transition a lot less scary than if I had come here without knowing a single person. Additionally all of us international students have really clung together, as expected. There are people from all over the world here as exchange students. It’s been a really fun experience meeting others who share my interests in Korean culture.  It’s also been fun experiencing all the new parts of Korea with other exchange students. 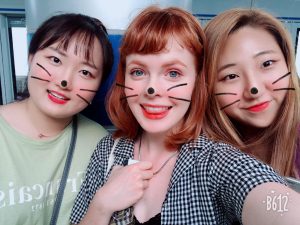 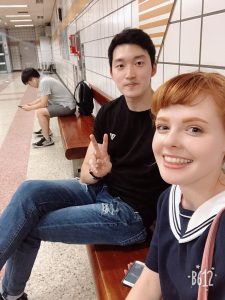 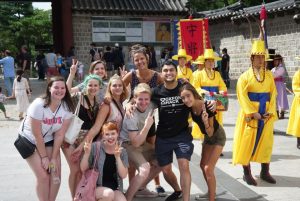 I think the biggest challenge so far as been not being proficient in the Korean language.  It’s not impossible to do things and knowing simple words and phrases has been really helpful. Still, I can’t help but feel a bit ashamed of my lack of ability. I’ve realized how privileged I am to be a native English speaker. If I didn’t want to learn Korean I could probably get by here for the most part. Many service workers simply address me in English as soon as they see me.  One memorable experience so far as been when a group of us exchange students went out to eat. We ended up picking a restaurant where the menu was entirely in Korean with some pictures. We struggled to communicate with the server and it took as over 15 minutes of arguing, pointing and flailing hand motions to work out our order. Hopefully now that I’m learning Korean for real that will be the last time that happens (probably not).

Additionally I think making new Korean friends will be a challenge since there aren’t really many opportunities for it to happen naturally and only those who are comfortable speaking English are likely to hang out with foreign students. That’s why despite being a beginner at Korean my goal this semester is to push myself to use the Korean that I know and am learning whenever possible. I think the most important thing is to make a genuine effort to speak the language. It’s the least I can do for all the people who accommodate me by speaking English.

I have a lot more I could write about but I think for now I’ll end this blog post here. I hope to update more frequently from now on so that my posts aren’t always this long.

Thanks for reading! Until next time