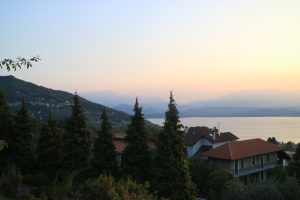 I am writing this to further procrastinate my studies. The second week of classes at the University of Bologna is finished and by now I have gotten used to the routine of waking up, making coffee, eating breakfast and going to class. It reminds me of my life back in Madison, but there are noticeable differences in a day at an Italian university.

Every morning I take the bus to a lecture hall on Via dello Scalo on the other side of the city walls. Unibo (as it’s called) has a main campus area along the arched porticoes of Via Zamboni, but classrooms are scattered throughout the city. On my first day I showed up early and sat on a bench, watching Italian students talk outside smoking cigarettes, trying to decide who I should approach as a friend.

I met a few people when I sat down in the plush blue chair of the lecture hall that doubles as a movie theater. My Italian has improved and I can make semi-decent small talk and most students have been friendly and helpful to me, the lost midwestern boy smiling and nodding as if he understands what they are saying.

The professor always arrives fifteen minutes late, once all the students have been seated. It is a tradition that survives from medieval times, when students would stand and applaud the arrival of the instructor. We don’t clap, but the room falls silent when the professor taps the mic and I am disappointed to see that there will be no slides, just him talking. In Italian. For two hours.

I should have drunk more coffee. I sit straight and try to break the strange noises coming from the professor’s mouth into words that I can recognize, relying on context, his tone and expressions as much as the actual words. If I focus I can follow along, scribbling down direct quotes and phrases I don’t understand, but if I zone out for too long it takes awhile to get back into it.

So far only two of my classes have started, but next week two more will begin. Here I study communications, so I have spent two weeks on the history of journalism, the rights of information and the basics of Italian public law. Because the United States has had such a foundational role in modern democratic communications, my classes talk a lot about our Declaration of Independence and the evolution of our media system. I am always proud to be an American.

I caught up with my professor after class. He was walking quickly outside with a pack of cigarettes in his hand and I talked with him as he smoked near the exit. I wanted him to know that I was a foreigner and was interested in what he was teaching, he told me he’d been to Madison once for a wedding and there was a textbook in English that I could read for the class. We shook hands and I left feeling better about my chances of surviving the semester.

At Italian universities, there are no midterms, quizzes, assigned reading or homework. Usually the entire grade is based on the final exam, a one-on-one conversation with the professor about anything they taught throughout the semester. They ask a few questions about the assigned books so you’d better study them well enough to respond something intelligent in coherent Italian.

It’s nice because with this system the professor may take pity on my poor grammar and boost my grade if he likes me. However, with no structure to the semester, I’m on my own to slowly read and memorize hundreds of pages of Italian textbooks before the end of the semester.

You can imagine the procrastination.

After just a week I wanted an escape. I met my friends at the park on Thursday morning and we walked to the Bologna Autostazione. We took a bus across the flat farmland to Milano, where it was sunny but cool, with tall buildings and busy streets that remind me of Chicago. The subway cars are open, and I watched the tail of the train bend side to side around underground curves to Milano Centrale, where we boarded a train to Lesa.

The train was full as it pulled out of Milan, but by the time we reached Lago Maggiore the sun was setting and we had the carriage to ourselves. We burst from a dark tunnel and coasted along red roofs of the small shoreline villages, with blue mountains rising in the pink beyond the green hills framing the enormous lake.

The train pulled away from Lesa, leaving us four standing alone at a small station with just two rails and no real platforms. The building was closed and there was no one in sight. We felt the cool dusk air rising from the hills behind us and could smell the vast lake below.

Our Airbnb is up in the hills above Lesa in Massino Visconti, a small village with tight streets and houses built from grey stones and red clay roofs. There is a tabbacaio, a small grocery store and a church on the hill. We speak Italian to our neighbors. 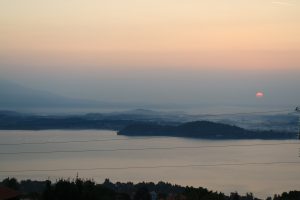 We pass the days watching the sky change over the lakes. From where I sit on the balcony writing, we watch the glowing orange orb break free from the mist over the lakes on the horizon directly east, squinting into the new day. During the day the sky is bright blue and hazy making  the mountains like blue ghosts that blend with the sky. As the daylight fades from the hills behind us there is just one sailboat left alone in the wide lake, drifting slowly in the last wind. At 8 o’clock churchbells ring throughout the valley and the lights begin to flicker on the opposite shore. Now it is dark and the stars are cold but the wind is warm. Jack and Teddy are laughing next to me and Cas is in the kitchen cooking red beans and rice.

Maybe I will study tomorrow. 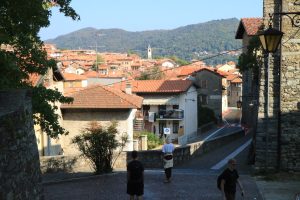 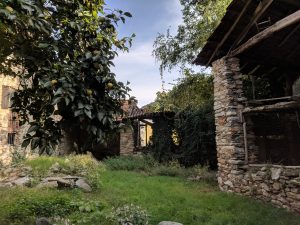