This past weekend I had the opportunity to experience some unique Korean sports events. Normally, as I’m not a particularly athletic or sporty person, I’m not very interested in going to sports games or events. However, since my personal challenge for being abroad is to experience as many elements of Korean culture as possible, when I have the opportunity to do or try something new I always say yes.

The first event is a well-known event that happens annually in Seoul. It’s called the Yonsei –Korea/Korea-Yonsei Games. Yonsei University and Korea University are known as the two most prestigious university’s in Korea (of course Ewha is right up there too) and have had a standing rivalry for many years. The games, which include soccer, rugby, baseball, basketball and ice hockey, have been happening since 1956. This sports competition is about much more than just the games themselves though. 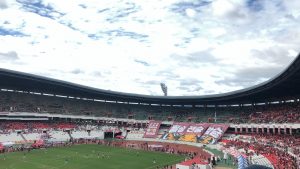 On Saturday a friend and I decided to hop over to Jamsil sports complex for the soccer match. As we left the train station hundreds of students sporting their respective university’s gear, colored red for Korea or blue for Yonsei, were heading towards the arena. Of course we don’t go to Yonsei or Korea University but since Ewha is so close to Yonsei we decided to sit in their section of the arena and root for them. The entire event is quite spectacular. The most enthralling aspects though for me were the cheerleaders. 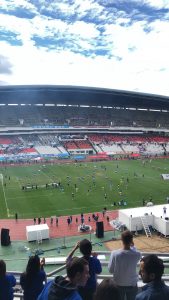 In front of the field there were two stages, one in front of each University section. Before the game started, students dressed in costumes that I would describe as a mix between power rangers and sailor scout uniforms, marched from the field to the stage. During the entirety of the game these students danced enthusiastically in unison, leading their side of the stadium in University specific songs complete with chanting with specific lyrics and hand motions/dance moves. At the front of the cheerleaders there was always one dressed a little more colorfully than the rest who would be leading everyone. Their motions were almost as if they were the lead singer of a rock band, singing, chanting instructions, and dancing with extremely dramatic motions to help hype everyone up. Since I was in the Yonsei section I learned their songs and did my best to follow the moves by watching the Korean students. There was a lot of shoulder-to-shoulder swaying back and forth, forward and back and just being there you could really sense the student’s level of school spirit. I had a hard time focusing on the soccer match it’s self because I was always staring at the cheerleaders up front or trying to dance along with everyone. As you can probably tell, the soccer game isn’t really the point of the event. It was a lot of fun seeing the students having such a fun time cheering together. Over all I had a great time and left with a very memorable experience for the books.

That wasn’t the end of my weekend though. A few weeks back I was invited to go to a baseball game by a new Korean friend of mine and I of course said yes. The next day, Sunday, was a sunny, warm day and I was back in the same sports complex as the Korea-Yonsei games but in the baseball stadium this time. Again what struck me the most was the team spirit exhibited by the fans of both teams. Every player on the team had a song/chant/jingle specifically about them that the crowd would sing when it was that players turn to bat. People held up yellow air filled sticks that make a hollow sound when hit together as another form of cheering. I’ve only been to a baseball game once before in my life so I didn’t know exactly what to expect and I had a bit of trouble keeping up with the action. I also didn’t expect the game to last four hours. Never the less I had a really nice day experiencing something I probably wouldn’t have gone to otherwise. 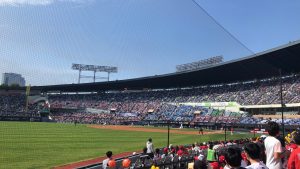 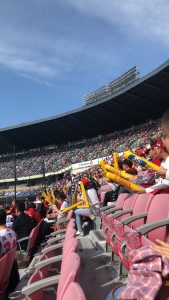 It’s been such a blessing to experience the aspects of Korea that I would never get to see if I wasn’t here for as long as I am. The semester is flying by already and I feel like I’m scrambling to do all the things I want to do while I’m here. I will probably keep saying this in every post but the longer I’m here the more I love this country and am dreading going home in just a few months. The weather here is now quickly cooling off and I’m looking forward to enjoying some autumn snacks and hikes to see the changing leave colors. But first I need to go buy some sweaters!

Thanks again for reading! Until next time~

1 thought on “Sports events in Seoul”