Fall is in full swing here in Korea and the leaves are rapidly changing color. I’m doing my best to get out and enjoy the last of the warm sunny afternoons and beautiful foliage before it all disappears.

Last weekend, amidst the stress of midterm preparation, I had an awesome opportunity to get out of Seoul and experience a new part of Korea. One thing I really like about being a foreigner in Seoul is that there are seriously so many fun opportunity’s to experience Korea and meet new people waiting just around every corner and you really don’t have to look very hard. Funday Korea Networks is a government-funded organization that partners with local businesses to put on programs for foreigners to experience Korean culture. Back in September my friend told me about one of their programs which would give us the chance to learn a flash mob dance and perform it wearing traditional Korean clothing called Hanbok (한복). The program also included a free trip to a city in southern Korea called Suncheon where we would perform the dance and also get to site see. The event was for promoting and celebrating the culture of Korean Hanbok as a part of Hanbok culture week 2018. Since it was free and sounded fun I decided to sign up.

We took two full Saturdays in October to learn the choreography, which was a very simple kpop medley. The program had over 80 participants both foreigners and Koreans, though mostly foreigners. It was a fun experience getting to meet new people from outside Ewha and also people who aren’t students. Then, last Friday, we got to perform the flash mob dance in Sinchon Square, which is conveniently only a 15-minute walk away from Ewha’s campus. And of course we got to dress up in Hanbok. It was my first time wearing it and really such a treat. For women Hanbok has 3 parts to it: the underskirt or hoopskirt, which gives the dress it’s round shape, the skirt itself that goes up to your chest and then the top shirt. They come in basically every color and pattern imaginable. Over the course of the program I got to wear two different Hanbok. 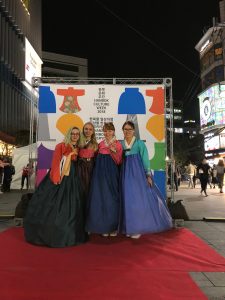 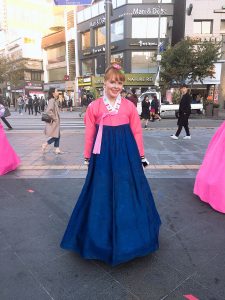 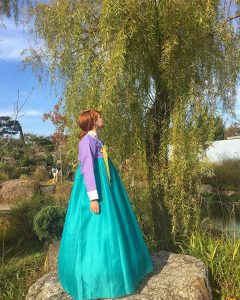 Dancing in Sinchon ended up being a ton of fun. There was quite a crowd and lots of film and media crews there filming. Even the mayor of Seoul showed up to meet people and participate. Our performance also included some professional dancers and b-boys that showed off their skills while wearing Hanbok as well. Needless to say dancing to energetic kpop music while wearing a pretty long skirt wasn’t the easiest task. Still I had a lot of fun and it reminded me how much I like dancing and performing in front of people.  After the performance we got to perform a traditional Korean dance called Ganggangsullae (강강술래) which involved a big pole with colorful ribbons attached to it. Everyone grabbed the end of one ribbon and marched around the pole while traditional Korean music was playing.

Another aspect of this program included a free trip to the southern city of Suncheon located in Jeolla province. I, along with most of the other participants all loaded into two buses early Saturday morning and drove five hours, arriving at Suncheon Bay National Garden later that afternoon. We got to wear Hanbok once again and walk around the beautifully groomed, expansive gardens. Later that evening we performed our flash-mob dance once again in front of a sizeable audience as a part of a showcase celebrating Suncheon culture and history. The rest of the evening we spent enjoying the show and walking the gardens. There was even a particularly impressive performance, which included acrobatics, shooting flames, dancing and fireworks. 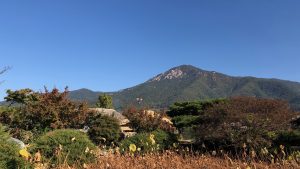 We spent the evening split up amongst several really nice guesthouses (basically the equivalent of a hostel) and were awake again early the next day. Sunday we visited Naganeupseong folk village and Suncheon Bay. Both places were surrounded by lots of farmland, woods, and mountains on all sides. It was most definitely a breath of fresh air being there compared to the urban skyscraper packed scenery of Seoul. The scenery was even more beautiful due to fall colors being in their prime right about now. Although it was such a short trip it made me want to explore more of Korea’s rural countryside and experience life in Korea outside the busy city life I’ve mostly been exposed to.

One of my goals for being in Korea was to hike as many mountains as possible. I am making progress towards that goal since I’ve now taken several afternoon hikes by myself on days where I don’t have much to do. There are honestly so many places to hike right in the middle of Seoul and luckily for me there are two mountains within a few miles of Ewha’s campus just adjacent to each other, Ansan and Inwangsan (San (산) means mountain in Korean). I have now hiked them both, and they both provide amazing views of Seoul and a quiet place to think and get some good exercise. Both mountains have pretty extensive trail systems. After initially climbing Ansan, which the base of is only a 25-minute walk from Ewha, I could see Inwangsan clearly which has a long ancient looking city wall tracing up its ridge (I’m not sure if it’s actually old, newly built or reconstructed).

Oddly, though it might be because I’ve gone on weekdays, there are never any tourists on the trails. Most often I encounter older Korean men and women, so I’m sure they’re quite surprised to see a redheaded young women trekking up the mountain by herself. It’s always kind of an adventure because although the parks have maps posted throughout the trails, I still end up getting confused about which path to take. But the thrill of exploring a new place, especially in nature has been a great way to relieve stress. Back home, although Madison has many great places to walk near my apartment, it’s difficult to get completely away from the city without a car. Here all I have to do is hop on the bus for 10 minutes or walk for 30 and I’m suddenly climbing a small mountain. This weekend I plan on hiking another mountain with friends.

Time is flying by and my time here is already halfway over. I continue to relish every moment here as much as I can.

Thanks again for reading. Until next time~