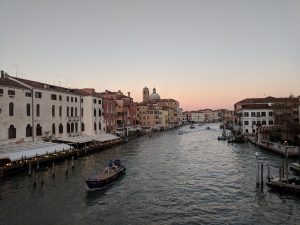 I was in Venice trying to find the train station. It was getting dark and I was lost in the narrow streets that bend and twist over skinny canals. Walking through the old downtown feels like stepping back in time; streetlights hang at distances from the stone walls, making dark shadows on the streets, ominously silent with only the echoes of my footsteps. I walked over a bridge that looked familiar and turned into an alley hardly wider than my shoulders; I was looking ahead in the near darkness and had to stop suddenly before almost stepping straight into a canal that I had taken for a street. I doubled back again and paused by a bright restaurant selling cheap pizza. 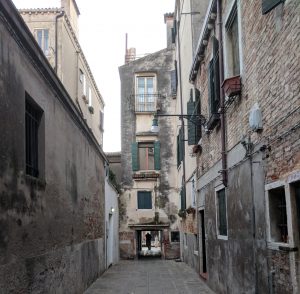 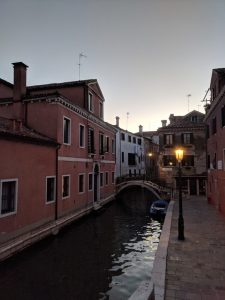 It was the type that you see all over Italy: a menu with a Pepsi logo sold pizzas with the typical toppings for less than five euros, the table by the door had three mismatched chairs, the floor didn’t look clean but certainly walkable, and behind the counter was a tall man with brown skin. He did not look Italian.

I started to go in behind two women who approached the restaurant like tourists do: looking at people sitting inside, then at the price on the menu, then at each other. A hooded man walked up behind them and in loud, accented, sarcastic English, said to them, “oh yeah, go in there, they are real italiani, they know how to cook, they know the pizza, they are italiani!”

I was curious, so I followed him away from the restaurant. I couldn’t tell if he was being serious.

“Ho fame, è davvero buona o stai scherzando?”, I asked. (I’m hungry, is it actually good or are you kidding?)

He must’ve thought I was Italian, unleashing a torrent of words only half of which I understood. But by his anger I knew what he was saying.

“These f—king migrants who come into my country and sell our food at shit prices to tourists who come from other f—king countries are destroying the culture!” I’m paraphrasing but you get the jist. He said he didn’t like Muslims, Indians, Arabs or Africans and they should all go home.

I tried to lighten the air, which had gone from zero to racist real quick. “I guess we’re all immigrants from somewhere,” I said, cautiously, in Italian.

He looked at me like dirt. With his right had he made the what-the-hell-are-you-talking-about gesture (put first three fingers and thumb together, point upwards, shake hand back and forth), then pointed at the ground for emphasis. “Io? No. Sono da qui. Questa è il mio paese la mia cultura,” (no, I’m from here, this is my culture, my country. The rest are foreigners). Gli altri sono stranieri.”

Then he looked me up and down, from my black Timbs to my backwards flat-brim hat, for the first time noticing my accent and poor pronunciations.

“Sono anche un straniero, sono degli Stati Uniti” (I’m a foreigner too, from the US)

“I can’t even believe it, don’t even talk to me,” he said in English, throwing up his arms and walking away. “Just get out of my country”.

I let him go. I had seen enough. I was surprised but not really mad. What right did I have to condemn him for wanting to keep his Italian heritage for those in his bloodline? He was born into the same white world that Italy has been for centuries and through his lifetime he has watched Venezia become commercialized, diversified and modernized into what it is today.

All over Europe are people that feel the same way. The world is changing and in recent years countries that have for centuries been defined by one ethnic group are faced with identity crises as they are populated by different religions, cultures and to be frank: people that aren’t white. 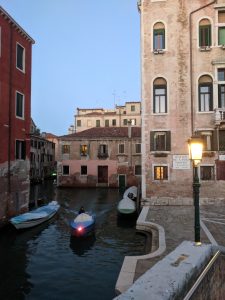 The resentment against foreigners is not helped by tourists that flood picturesque streets of hotspots like Venice, followed by fast food chains and street vendors who capitalize on the visitors. The situation is worsened still by the thousands of migrants every year who, escaping conflict or poverty in their homeland, wash ashore in Italy in search of new opportunities only to find work standing on the street corner all day, selling bracelets, books, cheap toys or drugs.

Europe’s migration problem is not one that will be solved anytime soon. But if you imagine the bigger picture, maybe these migrants are now coming to Europe because Europeans have spent the past 500 years stealing resources and imposing language and culture on the migrant’s homelands and now they have nowhere else to go. It makes ya think.

The migrant crisis in Europe makes worries of illegal immigrants in the United States seem like just fearmongering media cycles fomented by certain leaders who benefit politically by keeping white voter pools running scared to the ballot box. Oh wait, that’s exactly what it is.

Like in the United States, current leaders in Italy rose power by stoking the flames of nationalism in the hearts of older generations who feel their cultural dominance shrinking. Matteo Salvini, the Vicepresidente del Consiglio dei Ministri and Ministro dell’Interno (with powers roughly equivalent to our Speaker of the House and Attorney General), is famous for blatantly racist rhetoric and a pledge to ‘clean the streets’ of migrants. That is a rant I will save for a future post but for now just know that he is very racist, very powerful, and has a lot of support throughout Italy.

While I can see where my Venetian friend is coming from in wanting to keep Italy’s food and culture for Italian people, I don’t think that is the way of the future. The world is changing, growing more globalized every day, and so must our mentalities. I should add also that as a nation made of foreigners, the United States has no right to shut the door just because we don’t like where the new immigrants are coming from. The natives of what is now our land allowed us to come and in exchange we diseased, divided and decimated their culture.

I had to find my way out of that dark maze of stone streets and get back to Bologna. But as I am never one to let racism prevail, I went back to the pizza place and ordered a slice. The floor was not clean, but it was walkable. The man behind the counter was not Italian, but he was nice. And the pizza was not authentic. But it was cheap. 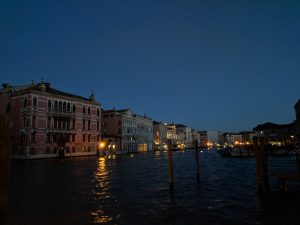