I apologize for the lack of posts over the last month or so. I’m reaching the end of my semester here in Seoul so before I wrap up this experience with my final thoughts I thought I’d update you on some of the things I’ve been up to over the month and a half or so. Sorry, this is going to be a long one.

Autumn here in Korea lasted much longer than I have ever experienced it back in Wisconsin. In fact, even last week just before winter like temperatures finally hit, there were still plenty of trees dawning bright red foliage dotted around campus. In Wisconsin we’re lucky if we have more than two weeks of prime fall colors to brighten up our day. Here in Seoul I got to enjoy the leaves for nearly two months straight. One memorable experience of enjoying fall was back in November when I took a day trip with a Korean friend of mine who has a car. We drove about an hour and a half outside of Seoul to a popular tourist destination called Namiseom Island. It’s known for it’s beautifully tree lined roads and walking paths. You can rent a bike or scooter; take a boat ride around the island, or just take your time strolling through the woods and along the field near the center of the island. It’s a beautiful place for a day trip with an emphasis on maintaining the islands natural state. Many people come from Seoul to visit and we saw many families with kids and couples enjoying themselves while we were there. The day we went was absolutely perfect weather and the leaves we’re in their peak. It was a great way to take a break from the skyscraper lined horizon of Seoul and just enjoy nature. 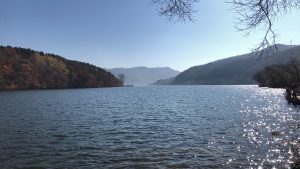 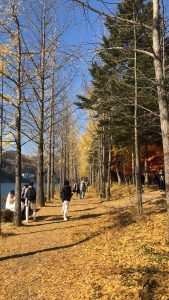 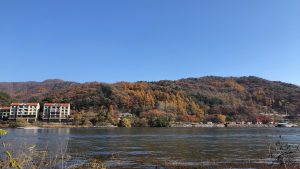 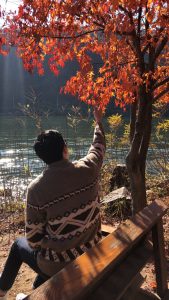 The temperatures stayed mild throughout November, which probably helped to elongate autumn however another weather variable I had not been expecting was the air pollution. The air quality took several extreme dips in November that made being outside not the most pleasant experience. Air pollution is something I have never once had to think about in my life. My first few months here I didn’t think much about it either until I noticed the visible clouding of the horizon on several of my afternoon hikes and realized it was more than just clouds or fog. Much of the air pollution is blown into Korea from China but a lot of it is produced domestically as well. I ended up downloading an app to keep track of the air quality and on several occasions had to buy specially air pollution filtration facemasks to wear when I went outside. I got sick in mid November and had a cough lasting for several weeks. The air quality most likely caused it to last much longer than it normally would. Even when you’re outside walking around, if you don’t have a facemask on you can feel the dust getting in your nose, mouth and lungs. I think that is one thing I have disliked the most about Seoul and can’t imagine living with on a long-term basis. 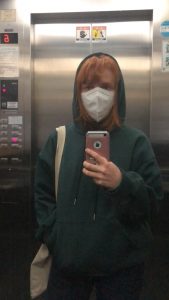 Besides clean air, another thing I really missed about home was my bike. I’m pretty accustomed to biking around to get everywhere back home or just taking my bike out for a ride around town when I feel stressed or restless. So before the weather got cold I took advantage of Seoul’s bike share/rental system and took several afternoon bike rides down some of Seoul’s Han River bike paths. You can rent these bikes for about a dollar an hour and there are rental and return racks easily accessible all throughout the city. In my opinion is a really great way to experience the less touristy areas of Seoul and cover a lot of ground while enjoying the cityscape. 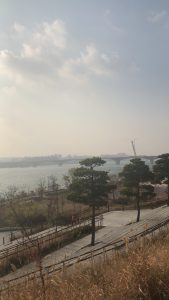 I crossed a few more things off my to do in Korea bucket list in November. As I’ve mentioned before, hiking the countless mountains Korea has to offer was one of the main things I wanted to do a lot of during my time here. So of course I had to check a big one off the list, that being Bukhansan. Bukhansan is the tallest mountain in the north most part of Seoul (“Buk” means north in Korean) and a very popular destination for tourists and hiking enthusiasts alike. It’s visible from most of the other mountains in Seoul that I climbed. I had missed out on opportunities to hike Bukhansan with other exchange students on previous occasions and one weekend I found myself with nothing to do as many of my friends decided to travel that weekend. So I decided to scale the mountain by myself.  I knew it was now or never since the weather was finally starting to cool off so I packed my backpack full of snacks and water and took the subway about an hour from Ewha. My starting point was on the eastern side of the mountain and it took me 45 minutes just to get to the trailhead from the station. I ended up starting a bit later than I had originally intended to so I was really pushing myself to go fast. Needless to say it was not an easy hike. In fact this was most definitely the most difficult hike I have done the entire semester. I have to say I really regret not bringing proper hiking shoes with me on this trip because my Nike sneakers, which have very little traction on the bottom, were really no match for the large smooth boulders that covered the hiking trails. I slipped more than one time and thankfully didn’t twist an ankle.

The most difficult part of this hike and by far the most fear inducing was the final stretch of the hike, which leads to the highest point of the peak, a large boulder dawning the Korean flag. The last stretch is very steep and almost entirely smooth boulders (again not good for my shoes). There was a wooden stair case and then from there you are forced to pull yourself up the face of the rock using metal ropes attached to poles hammered into the cliff. I was pretty terrified going up as my feet were slipping a lot.  From where I was I could see another rock face where people were rock climbing up a shear cliff face! Additionally I had to climb up along side other people who were also ascending and descending the narrow pathway at the same time as me. 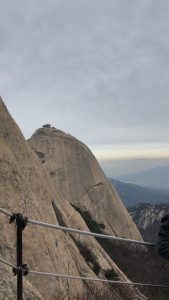 Despite the treacherous way up I did make it to the top finally where the wind was whipping around and the temperatures were much colder. The difficult climb up was most definitely worth the final view from the top though and I felt pretty accomplished for having gotten there in just over 2 hours. I enjoyed my snacks and the view on the top along with the many other hikers who made the climb and some cute “mountain” cats (literally just normal cats who live on the mountain).  I took my time going down which was probably just as difficult as going up and made it to the bottom before dark much to my relief. 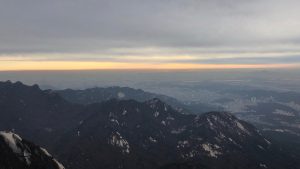 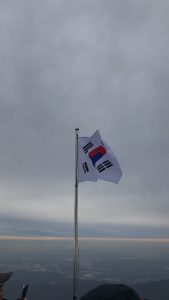 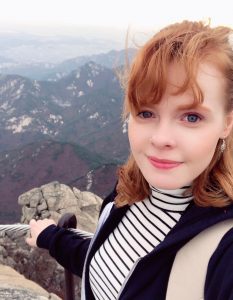 That ended up being my last major hike of the semester (I did hike Ansan again on another afternoon) and I have to say it was a good one to end on. I was quite sore for a few days afterwards. I’m pretty satisfied with the amount of hikes I’ve done over the last four months and I have to say I’m going to miss having such easy access to such beautiful views all the time.  However I most definitely feel motivated to get out and enjoy the outdoors and hiking more often once I’m back home. I’ve always been someone who enjoys nature but I really cherished the times I spent in the mountains and the countryside here. Living in a huge city can be really mentally draining sometimes and I definitely needed those hikes to escape and refuel.

I did a lot more in November that I have to catch you all up on but I think I’m going to put that in part two of wrapping up my adventures in Korea.  For now though it’s back to studying for finals! Thank you for reading and sticking with me during this journey.