It has been two weeks since I arrived in Galway, here are a couple of my first impressions.

Galway city is super cute. My main adventures in the city have taken me around the marina, Shop Street, and the university. The city is old and most of the buildings are historic. It’s so interesting to have history all around me here. The River Corrib runs right through the city and I walk along it often. There are both cobblestone streets and paved sidewalks. I love how walkable the city is, everything that I need is close by. There are a TON of churches and Galway Cathedral is visible from nearly every street corner. Galway is a mix between a college town, a tourist city, and a normal large Irish city. There’s not too much hustle and bustle, but still plenty to see and do. It’s fairly lively during the day, starting after 9:00am until 5:00 or 6:00pm during dinner time. After the sun goes down (which is pretty early right now) the city dies down. I’ll be curious to see what the vibe is like in a few months when there is more daylight. Something interesting I learned during Orientation at school is that the weekdays are the main nights to go out. On the weekends, most Irish students go home, and it is a lot quieter. Even though I have only been here two weeks I feel less like a tourist every day. It’s easy to almost “blend in” with the locals in Galway.

So far, I have not heard, what I would consider, traditional Irish music. At pubs, in stores, and on the radio, I have heard a majority of older American pop songs. I’ve heard throwback Beyoncé, Kanye, Train, Elton John, and Whitney Houston. American Top 40 hits seem to be very popular, especially hits from years or even decades ago. Even the street musicians (buskers) play older American songs. I assume once we continue to explore other parts of Ireland, we might here more traditional music. 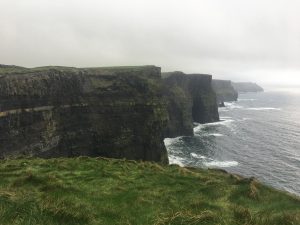 Ah, the weather. One of the aspects of Ireland and living abroad that I researched (and worried about) the most. I came to Galway with both my winter coat and long raincoat which have both served me well. The first couple of days here I was shocked at how humid, moist, and damp everything was. It has taken a lot of trial and error to figure out our heating system and getting used to the moisture in the air. Even though it is cold it is still damp, and everything stays wet. The weather changes constantly. I knew the weather in Ireland changed quite frequently, but I didn’t think it would be this drastic. At the start of the day it’s possible to wear a light raincoat, then it might be misty and windy, later become sunnier, possibly get warmer at night, and then very cold in the evening. Since we are right on the coast it’s easy to see rain coming in or blue skies peeking out over the clouds.

Since everyone speaks English, conversations have been smooth. There are some stronger accents that took a couple of minutes to figure out, but once I got into the rhythm, I could understand it better. I have heard several languages spoken on the street including French, Irish, and Spanish. There are even accents and languages I cannot decipher. Galway is really a cultural city and very international.

What they say about the Irish being nice is true! I am used to Midwest nice, but in Galway people seem to put on a good face all of the time. On campus, our tour guides and instructors have been fabulous and very gracious. In restaurants, stores, and pubs people are friendly and courteous.

Finally, school. As I am writing this, I am still in my first couple weeks of school. NUI Galway is a typical college campus. One that I can easily picture being in the US. The buildings range from super old, pretty crummy, moderate, and brand new. So far, classes seem pretty similar to UW Madison. Not all classes have discussion sections (tutorial) like Madison does. The biggest challenges relating to school that I have encountered have been registration and textbooks. First, with registration we were given a book of modules (classes) that we, as visiting students, could take. This was really helpful. I cross referenced these classes with those that would count for UW Madison credit. However, knowing what time a module would meet (their timetable) was a different story. Several modules had timetables listed online (which still required some digging), but other timetables had to be picked up in person at the department office. This was a completely new system for me. After choosing my modules, figuring out the location and times of class, I was extremely lucky to find that all of my modules fit into my personal timetable and I could take all of them. Textbooks are also different. Instead of getting an exact list of the books I am required to read for class, I was given an extensive list of possible books to read that would help me learn class material. This is all new to me. So far, I have taken this bit by bit and done textbook readings that have corresponded to lecture topics from the week. Finally, since the campus bookstore is quite small it seems like most students actually go to the library, find their textbooks, and do readings there.

These are only six of my first impressions of Ireland, Galway City, and NUI Galway. So far, so good!