Skip to main content
University of Wisconsin–Madison
After nearly three weeks here in Barcelona, I’m happy to say I feel much more adjusted than I anticipated! Whether it be learning how to navigate the metros, constantly being on guard for pick-pocketers or even slowly improving my understanding and speaking of Spanish, I’m super pleased with how my experience is going! 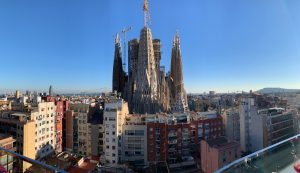 So far, any obstacles I’ve faced have definitely turned into learning experiences. For example, our apartment has had several maintenance issues. From having no hot water for almost a week, our laundry machine flooding our kitchen each time we used it and using a router meant for one person when there were six of us, we dealt with the issues and interacted with new people that made us further understand how to solve these challenges without the convenience elements we have in the states.Other than these minor hiccups, I am so lucky to have been put with an awesome group of roommates! In total there are six of us spanning from three different universities, University of Connecticut, Penn State University and of course, UW-Madison. We’ve already been busy planning trips for the rest of the semester, as well as trying our best to see anything and everything we can here in Barcelona. This is truly such an amazing city filled with so much culture and many things to do, it’s already making me upset knowing I have to leave this place in the next four months!In terms of my program, classes are already in full swing and, to be honest, a little more demanding than I would have imagined. I think I was a little stuck in the mentality that studying abroad will be more of a four-month European vacation, but I was wishfully thinking, and now learning how to do more with less time. It’s especially hard to be motivated with coursework when there are so many things I, and others, want to be doing and exploring in our new city. I think it will definitely come with time in learning how to balance school with everything else, but I am still super interested in my courses which makes things easier. Each of my professors have made themselves very approachable and given many details about their own lives to get closer to us. The classes here are pretty small, especially when compared to the classes at UW-Madison, so it takes some getting used to, but it’s been going really well since my professors and courses are interesting.One thing that’s really stuck out to me about Barcelona is how tense the political climate is and will continue to be while I’m here. I never realized how large the issues between Catalunya and Spain really were, and even how different the people (and languages) turn out to be. When you think of Barcelona, you might think it’s like the rest of Spain, but really there is a clear mix of two different cultures all over the city, which is both very interesting to be around, but also challenging at times in terms of language barriers and controversial topics. As I’ve been informed by my professors already, there will be two large elections in Spain right after our program ends, making it a really cool time to be here and living in the political atmosphere without actually being part of it. Our school is also located in a very central part of the city, so in terms of any protests and political differences, we will be fully immersed when/if it happens.Stemming off of the political scene topic, we recently all encountered a large Taxi strike that began in Barcelona and later Madrid against Uber and Cabify. Although the situation is very confusing to me, since it seems like the taxi drivers make much more profit than the Uber and Cabify drivers do, the whole city had to deal with taxis blocking off every major road in the center and threatening Ubers from continuing to work. For the week of protests, this made it very difficult for us to get home at nighttime, as on the weekdays metros stop at midnight, and it even heightened crime threats around the city, intimidating us to leave the apartment after dark. Witnessing this strike overall was just entirely different from what you would see in America, as the police here really could not do anything to stop it or move the cars. Now, as a result of the strike, Uber and Cabify are potentially pulling their business from Barcelona and Madrid, which for us would be unfortunate considering the convenience of these two applications (especially when living in a more residential area, making it more rare to see cabs driving around), but overall this experience was truly interesting to witness. 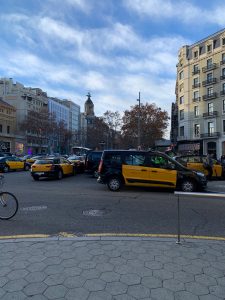 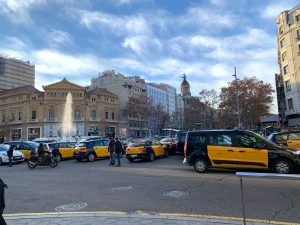 In other news, I am extremely excited to start traveling to new places. My roommates and I have already planned trips to Switzerland, the Netherlands, Czech Republic and England with many more plans to come, but I know I will always feel a little bittersweet leaving our new favorite city, and its amazing food, for a few weekends this next semester!” 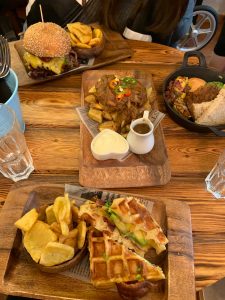