It has been 2 very long, very exhausting, amazing weeks. Yes, almost two weeks I’ve been here! I feel as though I’ve living in this city for months now, telling local people directions and taking the metro everywhere like I actually know how to pronounce the names of the stops (ahh don’t tell anyone but I definitely gave that lady the wrong directions, I was so confident and then as soon as she walked away I realized I was all wrong, oops, sorry!). Every day I get more comfortable and confident with what I’m doing here that time is already flying by.

Rewind a bit to my travel day here…

What a good moment it was when the scale at the airport check in counter said 48lbs! The day before and even that morning, my mom and I had tried every combination of moving things around and taking things out to get my suitcase to weigh under 50lbs. Everyone told me not to over pack, that I wouldn’t need very much, and things were cheap to buy once I got to Spain. But you can’t help but over pack, 4 months is a long time and it was comforting to know that I had everything I needed. Well, I ended up taking out many things, and I think that was one of my first steps to letting go of comfort to start embracing the crazy unknown journey I was about to start (sounds cheesy, but kind of true)!

I’m terrible at goodbyes, so that long line waiting for security only left me feeling sad about leaving my family, and on top of that I had packed my jar of peanut butter in my carry-on bag not knowing you couldn’t do that and the security guy took it away. Not a highlight!

Plane ride was just under 8 hours long. I barely slept, too awake, too excited, too nervous.

After time traveling quite a bit I had arrived in Barcelona Monday morning, found my program leaders, got the keys to my apartment, met my first roommate and was off to move into our new home.

It’s a 3 bedroom, 2 bathroom apartment, with a courtyard area. I learned that the neighborhood is mostly businesses mixed with residents, and it’s a wealthier safer area than most others. The metro stop is less than 5 minutes from our door, and only a 10 minute ride to the center and my school, which is very convenient. My roommates are very nice, and we’ve already finished a whole Netflix show together from all the time we spent awake and jet legged!

After that day I was constantly meeting new people and seeing things for the first time. I visited places like Plaça Catalunya and the center, Park Guell, Las Ramblas, La Boqueria Market, and many fun small streets, shops and restaurants. It was a very exciting but overwhelming time. IES pretty much let us loose in Barcelona, with no structure. 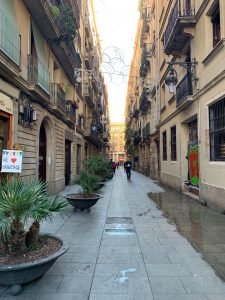 This first week I had to attend two orientation sessions over Tuesday and Wednesday. We met in our Spanish classes with our Spanish teacher, and viewed presentations about safety and the IES program staff and building. The sessions were only an hour each, but thank goodness my teacher was super informative and told us a lot of additional information that the video didn’t provide. Even though we had these orientation sessions, my days were basically like a vacation. I would wake up (really late, because I was still on Minnesota time!), eat, walk around, see some sights, meet friends, and hangout. It’s kind of a weird feeling to think about. I felt like, and kind of still feel like this whole thing is going to end any day now, like a normal vacation would. We made a joke the other day after a lot of dishes started to pile up, “oh we don’t need to do that, we’re only here for 4 months.” It’s this temporary, vacation like feeling, mixed with understanding that 4 months is actually a substantial amount of time, that makes this all so strange, and eventually forced us to do our dishes!

It wasn’t until the following week, when classes started that I started to feel like I was here for a purpose!

That’s a super-fast recap of some of the first couple days and week, here’s some random things I have learn and noticed about life in Barcelona…