Who would have thought that Spain was home to one of the two famous Guggenheim museums! I was lucky enough to visit Bilbao Spain and visit the art museum this past weekend, as well as roam around this beautiful relaxed town.

I was very excited leading up to Friday morning because this was my first trip leaving Barcelona on my own schedule since arriving 3 weeks ago. Our flight was set to leave at 7 am Friday morning and we spent a lot of the night before figuring out how we would get to the airport at 5 am. Recently, the taxis in Barcelona went on strike protesting the strict city rules and fees and the increase in Uber use that limits their business even more. For a week taxi drivers had parked all their cars on one street and gathered in protest around the city in public squares to demand changes from the government. I don’t normally use taxi’s, as the metro is much easier and cheaper, but once the metro closes from midnight to 5 am taxis are the only option. We knew about 5 euro buses that run back and forth from the airport to Plaça Catalunya but hadn’t seen them by the plaza for a few days and weren’t sure if they were also on strike. For the time we needed to be at the airport the metro wouldn’t open early enough for us to take the hour ride by train. After much more figuring out and talking around, the airport buses from the plaza would be running and that’s what we ended up doing. And the taxi strike ended up ending Thursday night anyways!

It only took about 25 minutes to get into the airport and all the way to our gate. At security it was an automated system to check our boarding passes, we didn’t have to show an ID of any sort and I didn’t have to take my shoes off or remove my liquids. Very high tech, but very free.

Our airline was one of those cheap European companies that flies people places for 30 euros, good for the budget, but not if you want to get some sleep on the plane. It was a bumpy ride, takeoff and landing weren’t the best, and the lights were on the whole time. We did however get to board the plane from the runway through the back of the plane. They bused us out to the middle of the runway with a bunch of planes ready to go and let us free. The boarding process in itself was dramatic and a free-for-all. BUT, I can’t complain, it got me where I needed to go, on time, and for cheap.

By the time we landed it was only 8:30 am and I had already been up for 4 hours. Outside it was raining and gloomy so we decided to take the bus to our hostel then do the Guggenheim!

The city itself has an old town and new development city area. The Guggenheim is toward the newer side of town and spurred the city growth during and after its build. It is an amazing building, with the shiny outside and modern architecture. And the inside is equally as stunning with art exhibits from Alberto Giacometti, Van Gogh and Picasso, Richard Serra.

Richard Serra’s walk through circle sculptures were about altering your sense of balance, time and space, and actually left me walking funny and feeling so weird. It was amazing how interactive art can literally effect your body.

There were so many cool and interesting things in the museum. I was running on very minimal sleep so at times it was hard to understand what I was looking at. At the Alberto Giacometti exhibit I was listen to my audio headset and it was talking about this famous sculpture of his, I looked around for so long to see this sculpture and it was in front of me the whole time. All 2 inches of it. Haha oh well! 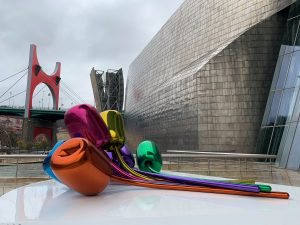 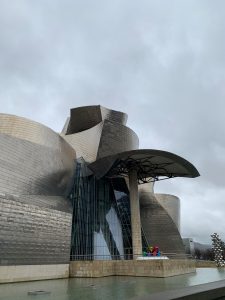 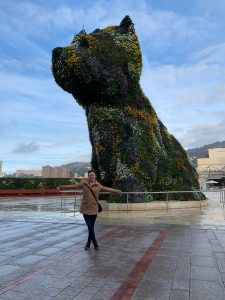 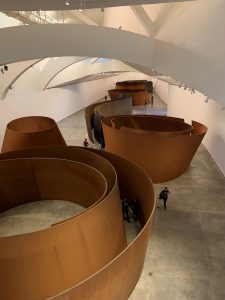 After running from the museum to lunch in the pouring rain and making it back to the hostel to check in we were soaked and exhausted. But we got ourselves together and walked toward old town Bilbao. Old town was very cool. The streets were narrow and around every corner was an open square, church or fountain. Everything was so compact and there were lots of shops. 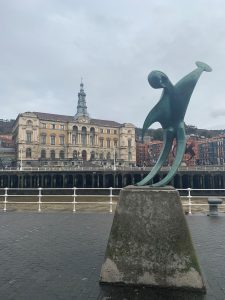 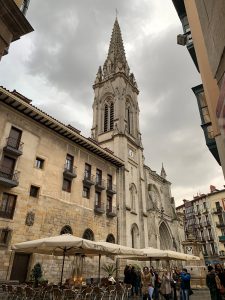 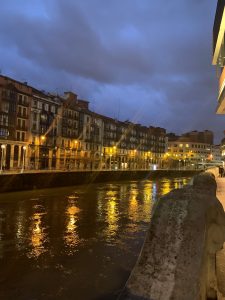 This first day of travel ended in kind of a struggle. Food was hard to get here in Bilbao. In Barcelona they eat late, no question about that but places still serve meals at most times of the evening. Bilbao restaurants don’t even open their kitchen until 9 pm, so to find a meal after a 16-hour day was hard and left us all a bit crabby. Eventually we settled on waiting at the restaurant attached to our hostel and eating a burger ha!

Traveling with new people is a hard thing, after all I just met all of these girls less than a month ago. Normally when traveling you’re with your family or friends so it’s a learning experience to just jump on a plane with semi new people, plan activities and figure out meals. I learned that I’m a mix between a planner and being spontaneous. Wondering and seeing what you stumble upon is really rewarding and exciting but planning is also needed for completing the activities you came to do and making sure you eat!!

Next morning there was sunshine and clear skies. Of course we got croissants for breakfast, a stable of a good day. Found our way to the Funicular, which is basically a train that takes you up the hillside. We thought the train itself would be the attraction but it was actually the view from the park at the top… 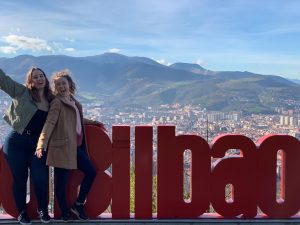 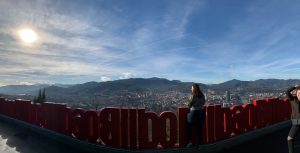 We figured out the local metro system, very easy just like Barcelona’s, and took it all the way took it about 15 minutes to an outskirts port town, Portugalete. Here they have a famous transporter bridge called the Vizcaya Bridge, that carries people and cars on the suspended moving platform. Lunch at Ristorante Don Peppone with delicious green pasta noodles, I wish I knew why they were green, but they tasted the same! 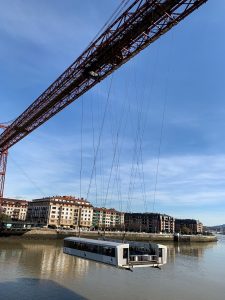 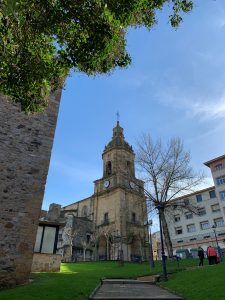 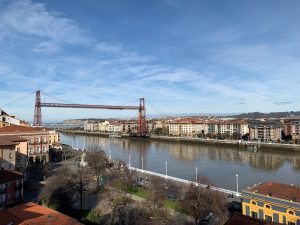 That night we did much better with the dinner situation. Shout-out to my dad for sending some restaurant ideas, we ended up at Larruzz. I had apple honey glaze cod fish with potatoes and we each ordered a different dessert to share!

Bilbao was very sweet. It reminded me of a quieter more relaxed Barcelona. The architecture was beautiful, with a mix of modern and old. And seeing the Guggenheim was a huge highlight and something I’m very glad to have visited.

The weirdest feeling of the trip was the Sunday morning returning to Barcelona. It felt like I was heading home in a way. Although I’ve only been living here for 3 and a half weeks it was very comfortable to know I was heading back to my apartment and my little room. I was very surprised to feel this way because Spain is still so fresh and new to me, but after traveling away for a few days it was nice to think I was going back to my semi-permanent “home.”