Spring term at Korea University starts in March, a little before the cherry blossoms bloom. This means that while my friends in Madison have already begun their classes, and my friends studying abroad in Europe are already posting gorgeous pictures of their weekend trips to Spain, I rather feel like I have dropped out of school. This isn’t the worst thing in the world; I get to bum around painting, skiing, stealing handfuls of chocolate chips from the kitchen, and watching Netflix under the legitimate excuse that my classes start later than most. It is also a strange void of time that leaves a lot of room for reflection and anticipation. 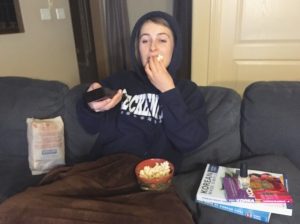 Last week I got ice cream with a childhood friend of mine who just came back from studying abroad at Korea University. The last time we were together we were making GarageBand soundtracks and pretending we were characters from Twilight, so it had been a while. I drove over to the ice cream shop with a bit of a headache because UPS had lost my Korea University acceptance package and I was trying to figure out where I could get an impromptu meningitis test required to live in my Korean accommodation. However, when I walked out of the ice cream shop my my stomach was light and fluttery, my mind was racing with excited thoughts, and I was ready to get stabbed by a hundred meningitis tests if that’s what it took to study in Korea.

My childhood friend’s ice cream had melted into soup because she couldn’t stop gushing about her time in Korea. She kept telling me over and over what an amazing, life changing time I was going to have. Many of her friends had decided to stay for another semester because they loved it so much, and she is considering moving there to work after she graduates from college. I eagerly scribbled notes on the K-Pop bands I need to listen to before my departure, the apps I need to download, the ridiculously delicious street food I need to try while I’m there, some etiquette tips to keep in mind (like receiving items with two hands), and the beautiful beaches and temples that deserve a visit.

In many ways I am thankful that I have a few more weeks remaining before I leave for Korea. I have the luxury of having time to do things like teach myself how to read and write some basic Korean. So far I have learned the Korean alphabet, called Hangul, which I find very beautiful. I am also reading books on Korean history and culture and watching vlogs on YouTube. Sometimes I feel like I am ruining some of the surprises that I’ll encounter by doing so much research and reading ahead of time, but from experience I know that preparation enhances the experience and there are limitless surprises and moments of wonder in store.