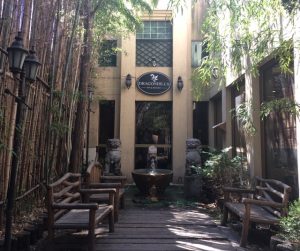 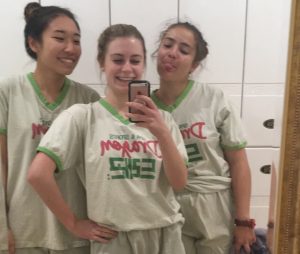 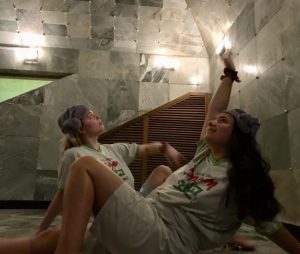 I am not very good at doing nothing. Even when I am watching Netflix, I alternate between using my planner to organize my week and scrolling through Instagram to see what my friends are up to. It is a sensory overload, and this is what my brain has come to crave. The problem with a sensory overload is that it becomes claustrophobic for your soul. There is no room left to think. Or rest. Or enjoy what you are doing. As hardworking as Koreans are, they also make the time to slow things down and relax. This weekend I tried to follow their lead: first by going to a Korean spa, and then by meditating with buddhists at a temple.

Korean spas are called jjimjilbangs. Jjimjilbangs are popular tourist destinations for foreigners, but if visit one, you will mostly find locals. My friend Helen goes to a jjimjilbang with her mom and her grandma every week, and this is common. All that I knew about jjimjilbangs came from watching the Conan O’Brien segment where he visits one with Steven Yeun. It is absolutely hilarious. He befriends a naked, old Korean man in the sauna, lays in a room that appears to be full of cocoa puffs, and loudly screams, “No! No!” when he moves from a hot pool to a cold one. I thought his experience would be hard to beat, but mine was even crazier.

I went to the jjimjilbang with three girls from my social organization class. We had never hung out outside of class, so swimming around naked together sounded like a logical first step to our friendship. When we arrived, we were given some potato sack-looking pajamas to wear; they were actually extremely comfortable. We then made our way through what can only be described as a Korean/Buddhist themed Las Vegas hotel to the saunas. Some of the saunas were in egyptian pyramids, others were in clay oven looking things. There were a variety of temperatures to choose from. The first one we went into was very small, hot, and dimly lit. I found myself hyperventilating but calmed myself down by breathing into my towel. The next one we went into was cold and had an actual snowman in it. The one after was perfectly warm and we stayed there for about half an hour quietly chatting. Every now and then, a Korean would open the door, assess our presence, then promptly close the door to find a different sauna. We were too relaxed to be offended.

After a brief break of eating Korean dumpling soup in the jjimjilbang’s restaurant, we made our way to the baths. This was the naked part. When we first took our clothes off, I was extremely giggly and shy, even though I tried desperately not to be. Luckily when we descended the stairs into the baths, I lost my self consciousness almost immediately. Korean women of all ages were walking around butt naked and completely at ease with their bodies. And you know what, we actually all looked about the same. Like the saunas, there were a multitude of beautiful, tiled tubs with various temperatures to choose from. There were also wash stations with mirrors and sinks occupied by older Korean women gently scrubbing their bodies. We discovered some baths in a courtyard and spent most of our time there because we enjoyed having the cool air to accompany the hot water. Also, we liked the regal looking scottish terrier sculpture spitting water into our bath.

Then came a snack break. Hard life, huh? There were tons of snacks and drinks to choose from, but we went the traditional route and ordered a rice drink with a side of golden hard boiled eggs soaked in tea. The rice drink was cool and sweet and the rice, which I expected to be weird in a drink, was actually fun to chew on. Helen, being the jjimjilbang expert, told us that we were supposed to crack open the hard boiled eggs by hitting them against our foreheads. I still have no idea if she was messing with us or not, but we were falling over with laughter trying to open the eggs with our heads. What felt like two hours in the spa turned out to be six. Even though I didn’t get a single thing done that day, it was far from a day wasted.

If only my attempt at finding peace and calmness with the buddhists had gone so well.