Last weekend I traveled to Belgium with my friend Nadya for some incredible sightseeing. In our short weekend we managed to pack in trips to Brussels, Bruges, and Waterloo. This trip was also super special for me, because I had the opportunity to visit my aunt, uncle, and cousin! It was a great change to stay at my aunt and uncle’s comfortable house instead of the traditional overcrowded hostel.

Our first day in Belgium we travelled to Brussels, the capital city, and meandered the streets while gazing at the iconic and stunning Art Nouveau architecture. We made stops at the Grand Place, the Manneken Pis, the Cathedral of St. Michael and St. Gudula, the Royal Library of Belgium, and topped our day off at the Magritte Museum. Compared to other cities I have travelled to, Brussels is relatively compact. This made it easy to walk from one site to the next. My favorite place by far was the Magritte Museum. If you don’t know, René Magritte was a Belgian artist famous for his surrealistic paintings. It’s an exciting experience walking through a museum filled with surrealist art and having your perception constantly challenged. After our stroll through the art museum, Nadya and I headed home for a lovely home-cooked meal with my aunt and uncle.

The next morning we woke up bright and early to catch a train to Bruges. Bruges is a Flemish city roughly an hour and a half north of Brussels and is home to some of the best-preserved medieval architecture in Europe. Nadya and I began our morning with a tour of St. John’s Hospital and Apothecary. St John’s originated as a hospital for ill pilgrims and travelers, and later on a monastery and convent were added to the building. Surprisingly St. John’s remained a functioning hospital until 1977. If you’re interested in the evolution of medical history, St. John’s Hospital and Apothecary is the place to go.

Following our tour of St. John’s, Nadya and I decided to taste the best of Belgium’s cuisine: beer, frites, and waffles. We began our gastronomic adventure with some frites or french fries. Unlike the United States, mayonnaise is the popular condiment of choice in Belgium. It might seem like a strange combination, but frites with mayonnaise are delicious! Our next stop on our food tour was to a local bar for some beer. Although Spain has award-winning wine, it can’t even compete with Belgium when it comes to beer! After a nice break in the bar, Nadya and I strolled the streets and found a local waffle vendor. The waffle stand made the waffles fresh off the griddle, and you could choose a wide range of toppings from strawberries to nutella. Suffice to say, Nadya and I were plenty full after our introduction to the holy trinity of Belgian food. Since we were in a food coma, we ended the day with a boat tour on the canals that run all throughout the city. From the boats we saw many of the cathedrals around Bruges, the most famous being the Basilica of the Holy Blood which houses a relic or vial of Jesus Christ’s blood and attracts many pilgrims annually.

On Sunday morning Nadya and I were able to sleep in before traveling to Waterloo, the infamous battlefield where Napoleon surrendered. We began our visit to Waterloo by visiting Memorial 1815 which is a museum that explains the rise and fall of Napoleon. The museum only opened 4 years ago to commemorate the bicentennial of the Battle of Waterloo. Inside the exhibit you can see the uniforms of the troops, the arms, and view a 4D movie that places you within the Battle of Waterloo itself. We only had an hour to spend at the museum, but we could have stayed there all morning. 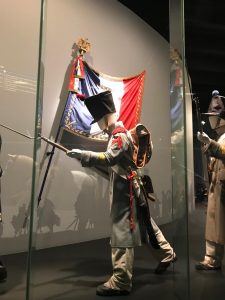 Right outside of the museum is the “Butte du Lion” or “Lion’s Mound” a man-made hill topped by a statue of a lion. This monument was constructed to mark the spot where William of Orange of the Netherlands was knocked off his horse by a musket ball while fighting and commemorates all those who died in battle. The hill is made from pieces of earth of the other parts of the battle field and the Lion is supposedly made out of the canons the French left behind when in retreat. Nadya and I climbed 225 steps to the top of the hill where we saw a panoramic view of the battlefields. The “Butte du Lion” was our last stop before flying back to Seville, and it was an astounding way to end our weekend in Belgium.