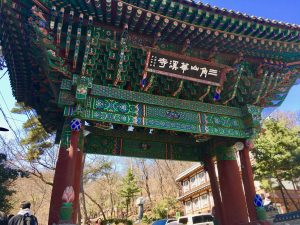 My second attempt at learning to do nothing the Korean way wasn’t nearly as successful as the day at the jjimjilbang, but I’ll get to that. I had been doing a lot of research trying to find a Buddhist temple in Seoul that conducted meditations in English. I was curious to see what Korean Buddhism was like because I had participated in Diamond Way Buddhism on the UW Madison campus for a year, and had really enjoyed the clarity and thoughtfulness it brought to my life. I finally found a temple located in Seoul that offered an English session, and was happy to see that it was only a 30 minute bus ride from my dorm.

It was a beautiful, sunny day when I set out on my adventure. I walked down a few hills full of quiet residential apartments and rode the bus through markets and shopping streets. Eventually more and more trees appeared and my bus dropped me off outside a beautiful, intricately decorated Buddhist gate; I followed a trail of people through it. We walked down a road dappled with light and eventually an enormous the temple came into view. It was three stories high and like the gate, was covered in colorful decoration. There was a courtyard nestled into it with rainbow colored flags strung across gently blowing in the wind.

After trying to make sense of a map written in Korean for a few minutes, a woman selling tea kindly pointed me in the right direction. I was to go to the top floor of the temple. I made my way up old, creaky stairs, past painted walls and an ornate room full of Koreans kneeling on the ground chanting in Buddhist prayer to the third floor of the building. Upon reaching the third floor, I took off my shoes and entered a dimly lit room that looked like a spacious attic. The floors and walls were made of a dark wood and a Buddha shrine surrounded by gifts sat in the center of the room. My eyes were then drawn to the back of the room, where soft, golden light was shining through rice paper doors. The doors were slightly parted to reveal a man in loose clothing sitting cross legged on a cushion.

I was surprised to see that the man was white and not Korean, and he beckoned me into the sunlit room in English. “Hello, come in. How did you find us?” he asked good naturedly. “Through Facebook,” I replied. It felt strange to talk about a modern media platform in a place that felt isolated from time. “Oh wow, it’s good to know that works,” he said, smiling and eyebrows flicking upwards. The man was Russian but had been living in Korea for a few years. He explained the history of this branch of Buddhism to me and gave instructions on how to sit in proper meditation form. I kept expecting other people to show up, but it was a private lesson.

“We will go through a rotation of silently meditating on the cushions and silently walking around the room,” he informed me as we entered the dimly lit room once again. Thus began the longest two hours of my life. It is important to note that back at Madison, each week a guest speaker would give a 30 minute talk on a Buddhist related topic followed by a 20 minute guided meditation (sort of like a visualization routine). Even then, I often had problems with my back hurting from sitting on the floor, and more than once found myself dozing off for a bit during the guided meditation. That was the little leagues compared to Korean meditation.

The first half an hour went pretty well. I was able to gently push away thoughts as they came to me, and I enjoyed the breeze coming through the windows, the birds chirping, and the quiet sound of drums from below us. The Russian man then struck a bell and we very slowly stood up. He motioned me to follow him and then we very slowly walked the perimeter of the room, following the lines in the floorboards. As we moved on to the second half of the first hour, things began to go downhill. My back started aching and I found my mind wandering to the homework I hadn’t gotten to yet that weekend. When I tried to refocus and silence my thoughts, I was just left with the discomfort of my body once again. I lifted my gaze, which was supposed to be directed downwards at 45 degrees, and noticed that two middle aged Korean men in their nice work clothes had joined us on nearby cushions. Their posture was perfectly straight and relaxed and they had a serene look in their smooth faces and closed eyes. Why couldn’t I meditate like them?

I started counting down the seconds until we would walk around the room and stretch our legs again. We did two more cycles of standing and sitting before feet started to tingle during the sitting portion from lack of blood flow. I gently massaged them with my hands to try to wake them, but instead of making it better, the tingling started to spread up my legs. I made myself sit for fifteen minutes with the tingling before I couldn’t stand it anymore. I remembered the Russian man had said that I could stand with my hands joined in front of me if I needed to, so I slowly moved to stand up. As soon as I put weight on my legs I fell over with a quiet thud back onto the floor. It was terrifying but also hilarious that my body would just refuse to support my weight, and I looked around to see who I could laugh with. Everyone remained still in meditation.

I have great admiration for Buddhists who are able to sit for hours at a time in stillness and silence. I believe that meditation it is a great opportunity to both reconnect with your body, and allow yourself to be free from it. I obviously have not reached the point where I can meditate for hours at a time, but my time at the temple inspired me to take little moments of stillness and quiet throughout my day. I love listening to music and podcasts, but now every once and I while I will take out my earbuds, try to quiet the thoughts in my head, and just truly enjoy where I am. I am living in Korea, and the present is a wonderful place to be.