I spent the week of Easter with Giovanni’s family in Pescara. His parents live up the street from his grandma and his cousins are around the corner. He’s got an uncle with a restaurant on the same street and a great-aunt that lives with her son in the flat above his grandma’s. I met so many of his family members that at first I couldn’t keep them straight, but after a few days of eating lunch and dinner at grandma’s I felt like another cousin back in town for the holiday.

Compared to most Italian cities, Pescara seems relatively modern- it was mostly rebuilt after the second world war. It’s on the eastern coast of Italy, parallel to Rome halfway down the peninsula. There’s a long beach alongside the downtown that is split by a river that goes west to the mountains of Abruzzo, the region. Above the city there are hills and from the top you can see distant white-capped mountains and the vast Adriatic Sea sandwiching the post-industrial city. It’s not the most aesthetic city I’ve been to, but I didn’t come for the scenery. I came to eat.

Italians take Easter -or Pasqua– very seriously. Not in a religious sense, their holy obligations carry the same indifference as many in the US, but for Easter everyone goes home and spends time with their family. Bologna stopped classes for a week and a half and when Giovanni, my former roommate, told me I could come with him and eat free home-cooked meals for a week, it sounded too good to be true.

The bus from Bologna took six hours and when we got to his grandma’s house it was almost midnight. She was in the kitchen, frying pizza dough and setting the table for us. She speaks mostly in dialect so at first it was hard to understand the Italian behind her thick accent, but we quickly became friends once she realized how much I can eat. That was only the beginning. 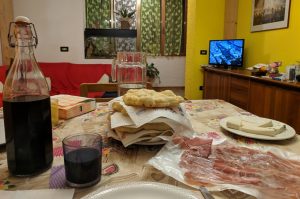 I met the rest of Giovanni’s immediate family the next day at lunch. At 1:30, his father walked into grandma’s and sat down at the table, pouring rosé into a glass with the stained fingers of a mechanic. His uncle entered and filled his glass with red wine, eyes glued to the TV. His younger brother was quiet, and his mom arrived as we were sitting down. I got the sense that this happened every day. The grandma put gnocchi with peas and asparagus in the center of the table and everyone filled their plate, said “buon appetito”, and ate quietly with their heads down. 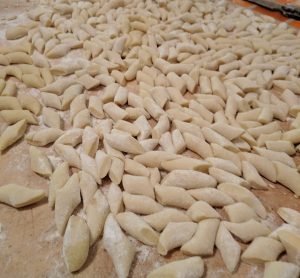 During the week, between meals, Giovanni and I walk around Pescara not really doing anything. On Thursday we drove to work with his dad and searched for wild asparagus in a nearby forest to contribute to dinner, and on Friday we went to the market with his grandma, where it was considerably easier to find asparagus, as well as everything else she needed to prepare for a long weekend of feeding the family.

Saturday was the Easter vigil so we unfolded the table and put down a nicer tablecloth, more cousins arrived and it was a proper three-course meal. First there was the antipasto, with small dishes of beans, squid, cabbage and fried sardines. We cleaned the plates and they were cleared from the table. Next was the first course which is always pasta, this time linguine with cod. Eat. Repeat. The second course is always meat; we ate fried cod, baked cod and cod in a tomato sauce. The Italian word for cod is baccalá, but I didn’t know what it meant at the time. I just kept eating whatever they put in front of me.

There were fifteen people at the table and only Giovanni spoke English. I sat at the center of the table on the outskirts of the conversation, keeping my mouth full to avoid speaking much. The uncle to my right drank a lot of wine and was explaining to me how it’s made and even though I know it’s basically just smushed and fermented grapes, I didn’t know the verb he was using for ‘to press’ and I must’ve looked confused so he kept explaining the process until the aunt cut in from my left to tell him that I understood what he was talking about but not the word he had used. The uncle glared at his ex-wife and then started to tell me how all women are fastidiose, but I interrupted him by asking him to pass me the wine. We kept eating.

By the end of the meal everyone was tired with glazed eyes staring off into nothing. We sipped a shot of genziana, a digestivo typical of Abruzzo to settle our stomachs and ate chocolate, fiadoni and other deserts while they cleared the table and brought out the cards. I was tired of trying to interpret the dialect so I slipped away, found a bed and immediately fell asleep.

On Easter Sunday we sat down again around the table. It was the same people, but everyone was dressed a little nicer. We ate broth with meat and vegetables, timballo (like lasagna, but thicker), pig liver, lamb chops, lamb, salad, potatoes and more deserts than I can remember. I fell asleep sitting up, my head on my fist.

I was still full when I woke up on Monday morning. Too much lamb did not sit well in my stomach and I did not feel great. In Italy the day after Easter is called Pasquetta (literally ‘little Easter’), which to me seems like an excuse to eat a little more, as if there wasn’t enough already.

Giovanni’s uncle picked us up in and we drove up into the cloudy mountains of Abruzzo, the narrow road doubled back and the country spread out below us, small mountainside villages built around crumbling medieval castles.

We drove up to Campo Imperatore, a hilly green plateau encircled with snowcapped mountains. The remote land is famous because it’s where they kept Mussolini after he was captured by democratic forces toward the end of WWII, until he was later freed by the Nazis. In the sixties when spaghetti-westerns were popular they filmed them there because of how the terrain resembles the American West. There are long curvy roads and few trees, the wind echoes over the empty valley that feels a planet away from Italy. 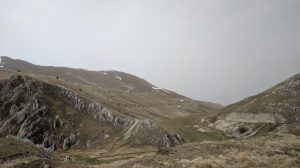 In the middle of it all, alongside the narrow road, was a collection of cars and campers around two wood buildings with picnic tables. Smoke rose from the crowds of people shouting in dialect standing by grills cooking arrosticini, sheep meat and pork fat grilled on wood sticks, the most famous food of Abruzzo. The land is technically protected so the buildings don’t have the license to serve food, but they sell the meat and provide the grills so campers cook for themselves. 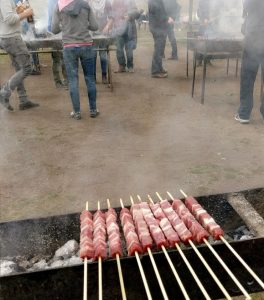 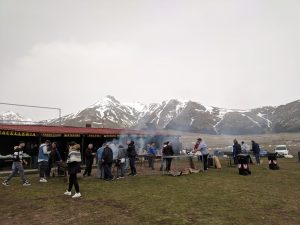 I was not that hungry and anyways we were on our way to lunch but I was in Abruzzo so I had to try arrosticini, they told me. We drove on and met the rest of the family at a restaurant in a small village in the mountains. The restaurant served another full course meal but I could not eat any more, Abruzzo had defeated me. The smell of lamb turned my stomach over and even the wine felt too heavy to drink. I ate some salad and bread with prosciutto but turned down more timballo. I was exhausted and sick of eating. I missed eating fruit and being hungry.

Today it is Tuesday and I’m writing this on the train back to Bologna, which feels more like ‘my city’ every time I leave. The train speeds north along the Adriatic Coast; on my left there are hills and on the right I watch waves crashing into the shore. Now I have no plans. In Bologna classes are cancelled so I guess I should study, but I’d rather get a haircut and call this girl from Valencia that I met last week. It’s a five-hour train ride and I haven’t eaten since lunch yesterday; I don’t remember what food I left in my kitchen, but it isn’t timballo or arrosticini. The train bends away from the sea, across the flat countryside and now my stomach is growling, hungry for more.

1 thought on “Hungry for More”