7:30- I wake up and get ready for the day. I get ready quietly because I have a roommate from Japan who likes to sleep in. We get along pretty well; she recently went home for the weekend and brought me back a bunch of Japanese candies to try. I usually eat yoghurt and a granola bar in the kitchen before I head to class.

8:30- I give a slight bow and a smile to our security guard as I leave my dorm to walk to class, it is important to be respectful to those older than you in Korea. My dorm is on a steep hill above the university, so I like walking to class a lot more than walking home from class. This time of year Seoul is lush and covered with flowers. The lanterns hung up for the Buddha’s birthday make the walk especially beautiful. 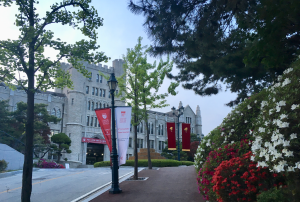 9:00- I have my Interpersonal Communication class, which is about relationships. My Professor is Korean, but she lived in the U.S. for 21 years so she has a very dynamic, more American style of teaching. She uses stories from her life as examples for the course material and is very animated when she speaks. My classmates are pretty shy during lectures, but they laugh along with her stories.

10:30- I work on homework for a while at a cafe. I don’t know how to speak Korean, so I usually order chamomile tea, which has the highest success rate of my order turning out what I asked for. I also have to specify that I want my tea hot. “Camomile tea, hot please!” I do know how to say “hello” and “thank you” in Korean, so I try to throw those in there as much as I can. “Hello” is pronounced “anyehaseo,” and “thank you” is “kamsamnida.” 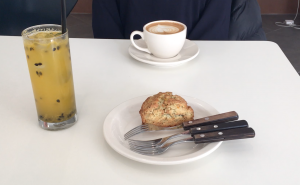 12:30- I either grab lunch with a friend at one of the many restaurants in the Anam district around our university, or I’ll pick up some food at a convenience store and eat it outside at a picnic table on campus. The convenience stores here have a lot more than chips and candy; I will usually grab Korean sushi, called kimbap. I love eating outside because my campus is truly beautiful. All the buildings are made of stone, and little paths through the trees connect them. 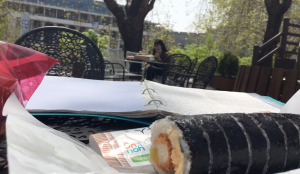 3:30- I have my second class of the day, which is called “The American Empire and East Asia.” This has been the most mind-opening class for me this semester. It is based on a book called, Blowback by Chalmers Johnson, and is about the unintended consequences of American actions in Asia. It has really challenged my perception that the U.S. is always the good guy. For example, I didn’t know that for decades the U.S. supported authoritarian regimes in South Korea who suppressed democracy.

5:00- There is so much happening in Seoul that my evenings rarely look the same. I will give two examples of things I have done recently…

I went to Hongdae with my friend Subin to learn how to do traditional Korean painting. The teacher lived in an apartment building that overlooked the whole city. She had classical music playing and we had a view of the sunset. We picked which design we wanted; I chose a red flower design that I later learned symbolizes material wealth. I probably would have gone for something more noble like love or harmony had I known this before, but hey, I’ll take money. We spent three hours painting in near silence. It was very relaxing and took a very steady hand. 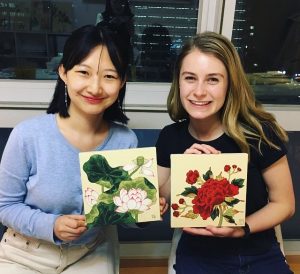 Every other week I join my KUBA group for dinner and drinks. KUBA is a program run by Korea University that pairs international students with korean “buddies” who spend time with us. We go on picnics, see shows, and tour palaces. Every Thursday KUBA goes out for dinner and drinks. It is a great opportunity to try foods I would normally be too shy to try; like Bulgogi and noodles in ice soup. After dinner we go to an underground bar area where we chat loudly and play drinking games with soju, the most popular type of alcohol in Korea. 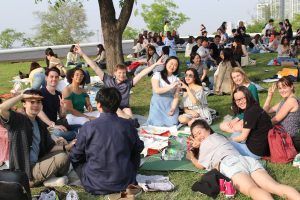 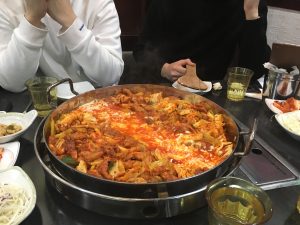 12:00- I call it a night. This is actually pretty early for Koreans, many of whom stay out late into the night either studying or partying. 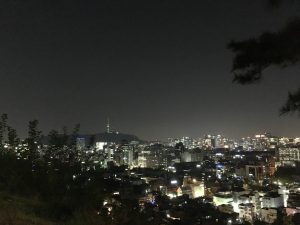 Another end to a fantastic day in Korea.