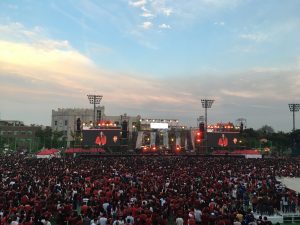 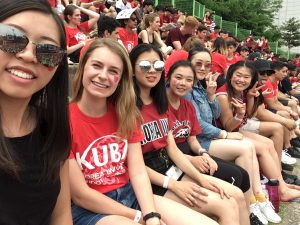 Picture a UW Madison football game; a sea of thousands of rowdy people dressed in red gathered in a stadium. Now, imagine that instead of the game lasting a few hours, it goes on from sunrise to sunset. Then, mentally pluck each one of the football players off of the field, flick them away, and replace them with kpop stars. Voila! We have the annual Korea University IPSELENTI event!

Part of the allure of IPSELENTI is that they keep the performer lineup a secret until they actually walk onto the stage. Last year, Korea University brought in Psy and Blackpink to perform (some of the biggest names in kpop). There’s also a bit of competitiveness between Korea University and other schools in Seoul because the other universities hold their own events similar to IPSELENTI around the same week as ours. We all want to brag about getting better kpop performers than the other schools.

My friends and I arrived at the field at 10:30 to meet up with the other exchange students. Korea University was kind enough to give us exchange students first admission to the event. The only catch was that they wouldn’t let us leave the stadium until 3:00. “Eat a big breakfast!” they instructed us over text. We waited two hours in the stadium chatting to one another. At one point, we wandered to the other side of the field to get temporary face tattoos. Tinder was sponsoring our event and were giving out free KU tattoos as well as flame tattoos that said Tinder on them. Classy.

Finally, the cheering began. Us exchange students were prepared because we had gone to cheering boot camp two months earlier. The training had been two sweaty hours of basically the most intense zumba class you’ve ever experienced. We were ready. At this point, a couple thousand regular KU students had joined the stadium. With dramatic music blaring, the KU cheerleaders made their entrance onto the stage. One by one, images of their members’ faces flashed onto the big screens, their somber faces moving to face the camera in slow motion as their names appeared to introduce them. 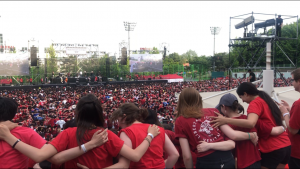 Each of the songs we cheered to had its own elaborate dance sequence. Most of them had to do with how awesome Korea University is and how much Yonsei University sucks. It was pretty exhilarating dancing and singing with thousands of students. The go-to dance move was one where we put our arms around each others shoulders and leaned backward and forward to the music. I was standing next to the wildest people in our exchange group and basically got whiplash from this move. Another move was one where you jump around and ram into everyone around you. This made a lot of sense for the people standing on the field, but as we were standing on the stairs, we ended up all falling on top of each other and into the rows in front of us. Don’t worry, we were all laughing and made it out with zero injuries!

At 3:00 we left some belongings behind to save our seats and dashed out of the stadium to eat some kimbap (korean sushi). All of the dancing had left us famished. By the time we got back, the stadium was twice as full as it was before. There was growing excitement among the crowd. After some warm up bands performed, the sun began to set and the kpop stars were revealed one by one. We ended up getting a girl group called LOVELYZ, a solo performer named Chungha, a boy group called SEVENTEEN, and …  I can’t remember the fourth performer’s name but he was older and had sort of seemed like a Korean Andrea Bocelli. They were truly fantastic performances and all the girls screaming their heads off was proof that the KU students enjoyed them as well. What blows my mind is how good kpop stars are at dancing while singing. It is as much of a visual spectacle as it is an auditory one. If you haven’t seen a kpop performance, go look it up on Youtube right after you read this!

The performances finished at about 10:00 PM, and there was a huge fireworks display to conclude the event. Dramatic music once again pounded through the stadium as the sky exploded and shimmered. My study abroad group and our Korean buddies went out to drink and celebrate at a bar afterwards. Our time together is nearing the end, so it all felt bittersweet.

As you can imagine, I slept in very late the next day. IPSELENTI was one of my favorite memories I’ve made so far at KU. 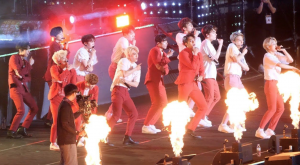 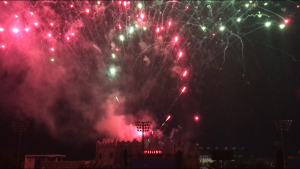