Already on our first day here, I am learning. After orientation, we visited Humayun’s Tomb. He was a Mughal Emperor here in Delhi and after his death his wife had the tomb built for his burial with architects and sculptors that she chose. It was surprising and really cool to visit a major historical mosque — 16th century — that was put together by a Muslim woman. The part that I noticed right away about the design of the building was the six large Stars of David decorating the upper façade. I asked our Indian on-site program director, Harini, why a very traditional Jewish symbol would adorn a Muslim mosque. And she talked to our group about the Holy Land that the three Abrahamic religions share. Harini talked briefly about the media, about the Israel-Palestine conflict and how it wasn’t always like that. She talked about David as an important prophet for Muslims, Jews, and Christians and finished with a talk about the cosmos and the importance of stars in all three faiths. The Stars of David symbolize so much and have already forced me to confront some preconceived notions about similarities and differences of the religions of the world. 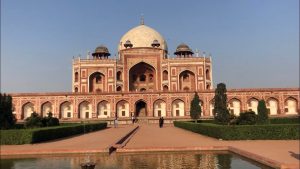