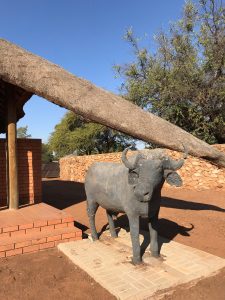 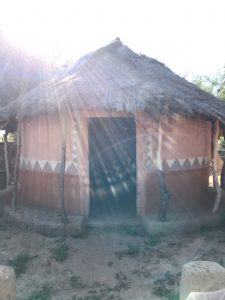 In the village of Ramotswa, around a 1-hour bus ride from Gaborone, Botswana, I walk alongside a quiet road basked in golden sunlight with my assignment partners. A herd of goats wearing bells cross the road as we walk towards the kgotla, or village center. Cars occasionally drive by, and a few villagers mill along the red dirt paths. We reach the kgotla, or village center, which houses several round mud-brick structures, a large meeting hall, and a stone statue of the village’s totem animal— a bull.

Ramotswa is the tribal capital of the BaLete ethnic group, and its primary industry is milling wheat flour. The village is also the only village in Botswana with a female head chief, Mosadi Seboko, who was the first female kgosi in the country’s history. We hear a man greet us from his porch and, after introducing ourselves, ask him about kgosi Seboko. He tells us that she is a very nice woman who is very important to the village community, cares deeply about issues in the village, and discusses gender issues. We attempt to ask more follow up questions about the chief, but he changes the subject.

We chose to go to Ramotswa for our village assignment to learn more about how the villagers feel about having the first, and only, female kgosi in the country. After talking to some women selling fruit, our taxi driver, the kgotla security guards, and the man on his porch, we found that the villagers tend to stress that there is no difference between a male kgosi and a female one, almost in a defensive manner. Some villagers referred to the kgosi as “he or she,” rather than just referring to the chief as “she.” All of the responses seemed to ignore any special circumstances or issues that come from having a female chief and simply referred to the chief as “good” or “nice.” This may be because they are defending their chief by insisting upon erasing difference between male and female in chieftaincy, or it may be because the chief’s gender is controversial and her stance on gender issues should be discussed with caution. Either way, her role as the first female kgosi is a monumental one for women’s rights in Botswana, and with it comes inevitable challenges and increased scrutiny.

Ramotswa differs from the capital city, Gaborone, in that it is obviously much smaller. It is mainly a residential area with only a few stores, including a Choppies grocery store that seems to be the most popular area in town. A few street vendors are set up next to the store, and the parking lot is both a hub for taxis and a bus stop. People sit around talking to each other as policemen converse with them, and goats and chickens wander around. Kids in uniforms walk home from school on the road across from the store, and the area is dotted with modest houses under small trees. People all speak to each other in Setswana, not English, and there is more of a language barrier between us and the villagers that in Gaborone. Many of the people we talked to throughout the village were born and raised in Ramotswa and didn’t ever consider living anywhere else.

The population includes a mix of young and old, but most of the youth and working-age people commute in and out of Gaborone on the old, stuffy bus we took to get into the city either for work or school. It makes sense that people would need to go to Gaborone for work, as the only jobs available within the village are ones such as taxi/bus driver, grocery store worker, street vendor, desk worker, or security/police officer. The man we talked to mentioned that he worked night shifts in Gaborone as a security officer, but lived in the village with his family. There aren’t many farmers or herders due to the desert-like land and lack of pasture area, and the animals are kept not for commercial purposes. Because the village is mainly made up of houses and people mainly rely on outside income, the interactions between people are as friendly neighbors, and the bus to and from Gaborone is vital to the functioning of the village.

As I walked through the village, I did feel a bit uncomfortable simply because of the randomness of the situation. Most foreigners would have no reason to ever visit Ramotswa, especially because it is just a residential village without much to see. Every person we talked to assumed we were from the Peace Corps because Peace Corps officers usually do homestays in more rural areas. I felt slightly out of place walking around without purpose, as if I was intruding on the day-to-day routine of the village and villagers. However, it was an eye-opening experience to see how a smaller city in Botswana functions and observe it from a foreigners’ perspective. The peaceful atmosphere and slower pace of life in the village was a refreshing change of pace from downtown Gaborone, and I was fortunate to briefly observe life in a neighboring village.