There is no stranger feeling than getting off a plane and feeling like your home is an alien planet. After living in Korea for four and a half months, I felt very overwhelmed and out of place walking through the crowded airport terminal in the US. Feeling thirsty, I found a Starbucks, ordered an iced tea, and quickly scribbled in my journal all of the things that felt weird to me in the first moments back in the US. I’ll share them with you:

-leggings. I haven’t seen those in 4 months. They look so tight… and so comfortable

-there is so much eye contact from strangers here. I feel like I must have something on my face, or that people must recognize me from somewhere

-I had forgotten how much Americans complain about their food and drinks; it’s embarrassing

-the airport employees and security actually talked to me and made jokes! They were so friendly! In Korea they wore masks, stamped my passport, and said nothing

-there are snacks everywhere!!! Literally so many candies and crackers. I spent an hour in Incheon airport (in Korea) looking for airplane snacks before my flight

-why doesn’t my toilet have a heated seat or 20 cleaning features? This feels like the Stone Age

Things continued to surprise me after I left the airport. Walking out to my grandparents’ car, I found myself overcome with awe at the size of the sky. I know that sounds like I’m trying to be poetic, but the difference between the claustrophobic, hazy skies of Seoul where you’re surrounded by buildings, and the clear skies of Colorado where you can see hundreds of miles to the horizon was breathtaking. Going to an American grocery store again was also exciting. Everything looked delicious and was beautifully packaged. I was surprised that the chicken and fish were already cut and cleaned and no longer looked like animals. In Korea, the fish were literally still swimming in tanks. The pastry and dessert section took me three minutes to walk through and there were seemingly endless options of sandwich meats, cheeses, and potato chips. Even something as basic as salad dressing had about 50 varieties to choose from. I was so delighted by everything that the cashier actually asked me where I was from. “Oh. I’m from here!” I told him, laughing and a bit embarrassed. “I’ve just been gone a while.”

Even though moments like standing under the vast Colorado sky, walking through giant American grocery stores, and spending time with my family bring me joy, it is hard coming back to America after living abroad. Many people call this reverse culture shock, and it tends to hit me harder than the shock of going to another country in the first place. I struggled with reverse culture shock when I came back from living in the Netherlands in high school, and studying abroad in Scotland last semester, and I am starting to feel it once again. For me, the biggest shock is how much time I suddenly spend alone. I live in a big house in the suburbs of Colorado, and I often find myself alone when my dad is at work, my mom at church, and my brothers are on the other side of the house playing video games. I spend lots of time alone in my car when I am driving to get from one place to another. And I feel alone walking through my ghost town neighborhood where other people stay inside in their big houses. It is a bit depressing, and it makes me think longingly of my time living in Seoul.

My last day in Seoul was really a perfect ending. I had just gotten back from a trip to Japan, and only had a day in Seoul before my flight home to the US. After catching up on sleep in the morning, I headed over to a part of Seoul called Insadong to buy some last minute gifts for my family. The sun was shining brilliantly and orange flowers were dripping from vines all over the city. Pairs of girls were strolling down the streets dressed in frilly pastel dresses and carrying shopping bags. Their red lipstick was applied impeccably and they didn’t have a hair out of place. I bought wooden stamp blocks for my brothers with their names meticulously carved into them in Korean, as well as some Korean face and foot masks to give to friends. I ate bibimbap for lunch: a delicious rice, egg and vegetable dish cooked by these sweet, older Korean ladies (we call them ajummas). 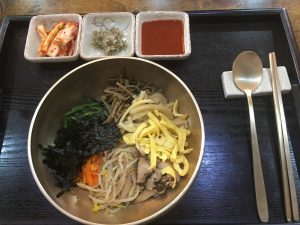 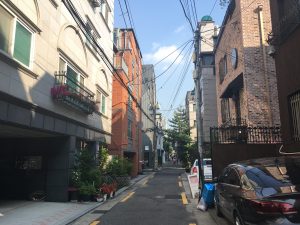 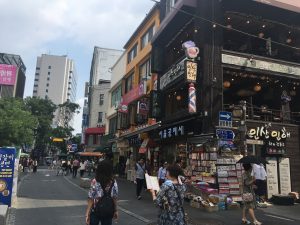 In the afternoon, I went to a different part of Seoul called YeonNam to find a themed cafe I’d been meaning to go to. I actually didn’t find it because my phone data was gone, but I found another trendy cafe that sold macaroons (a Korean obsession). Finally, I headed back to Anam to meet up with two of my best friends from the semester. We ate cheesy jjimdak for dinner and chatted about our summer plans. Afterwards, we went for strawberry bingsu (Korean ice cream) and reminisced about all the things that had happened this semester. If you can’t already tell, a good majority of my time in Korea was spent eating and talking. As the night grew later, I reluctantly called a taxi and my friends and I exchanged very long hugs and promises to keep in touch. When I got back to my Airb&b I crawled into bed. I had a hard closing my eyes, knowing that when I opened them again I’d be heading home. 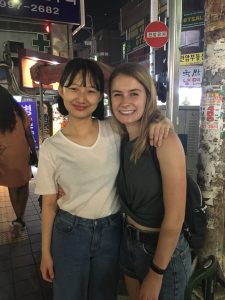 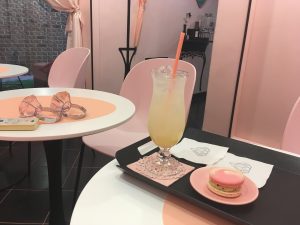 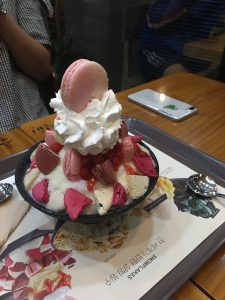 I’m sitting on my back porch in Colorado as I write this. Even though the sky is blue, I can see a storm brewing in the distance over the mountains: thick, churning white clouds over an area smudged blue. The birds and crickets are becoming louder in anticipation. My brothers are beginning to wake up. I can hear the shower running upstairs, and one of my brothers briefly scampered downstairs in his tighty whities to grab his charger. My mom came in from gardening a few minutes ago with a pink rose in hand, encouraging me to smell its fragrant petals. The first couple days back in the US were overwhelming, but after a week almost everything feels normal again. I now drive a car to get around instead of navigating between subway lines, my bed is giant and soft instead of hard and narrow, I went to go see the new Spider Man movie with my brothers and got popcorn large enough to feed an army, and my skin is becoming tan from spending time outside under the Colorado sun. It is nice to be home, but I also miss living in Korea. Both are different and precious in their own way.