It has been just over 2 weeks since arriving in Sweden and I have encountered plenty of problems. Major appliance failures in my apartment, problems with my residence permit, my student card being overdue, class registration issues, losing my bus pass (admittedly my fault), and acts of vandalism in my apartment complex (resulting in some ruined laundry) are just the greater ones. So, lets focus on something positive. My first class started this week. It was an easy day; going over the schedule, syllabus, and an intro lecture. This class has an official title that is long and cumbersome, so I will simply call it “Fisheries Ecology.” It seems interesting but, from looking over the first few readings and syllabus, I fear I may already know a lot of the material. I am sure I will learn something new, but I want a proper challenge.

The weather has been lovely. At least what I would consider lovely. I enjoy the cool breeze and the “herds” of lumbering grey, white, and silver cumulus clouds and their slate-blue footprints. I like the tea-like scent of rain and leaves in the early autumn morning. Most would consider this too cloudy and cool.

The flora and fauna have been interesting. A week ago, I saw a couple Eurasian viviparous lizards. While I would love to catch one and examine it before releasing it, I believe they have already retreated into the ground for their winter torpor. I will revisit this idea come May. There are so many edible berries here that, if I like, I can step off the sidewalk anywhere and have a snack. A tart, face-puckering snack in the instance of rose hips, gooseberries, and rowanberries. The blueberries, lingonberries, and raspberries have been nicely sweet. I will have to collect some for my salads.

Speaking of food, and maybe backpedaling just a bit in my efforts to talk about something positive…

It is very hard to diet here in Sweden. The Swedes love ice cream and candy. It is everywhere. Sweet pastries are common everywhere and customarily eaten with coffee or tea. It is extremely difficult to find low-fat or low-sugar foods here. I had to make my own salad dressing which, while delicious, is still 60% of the calories of store-bought dressings. Diet soda, aside from Diet Coke which I do not like, does not exist here. Sugar-free water flavoring does not exist here. I’m still trying to lose weight, but it won’t be easy. Which is frustrating because this place is giving me an inferiority complex. I thought it was a silly stereotype, but it turns out the Swedes are indeed a very attractive people. I mean, very attractive. Not just in facial features and symmetry, but also figure. They can eat candy and ice cream, and they do not have a need for diet foods because they are, overall, very active and fit. Most of them also have a fashion sense that is very flattering and simultaneously classy. The rest of them dress in very form-fitting clothes to show off their figure. Bicycles here are as common as water bottles on the UW campus and people are constantly jogging or Nordic-walking everywhere. I must look like a toad to these people. Maybe some nice “Viking woman” here will think toads are as interesting as I do and join me for coffee!

Unfortunately, there really isn’t much else to say at this time. My life is effectively on hold until I receive my refund from the fraud case, my student card, my residence permit, and my bank card. Not having any say in these items is frustrating enough but when they hold up much of what I can be doing with my time, it becomes a bit depressing. I suppose could go on about studying the topics related to my major, but I am reserving that for a more intellectually-intense future entry. Friends and family have expressed an interest in seeing more photos. For now, I will leave you with a few more from my time in Riga and Gdansk, and a couple from my time so far in Uppsala, in no particular order.

Below) I ordered this without knowing what the entrée was. It turned out to be liver and onions. Pretty good, too. 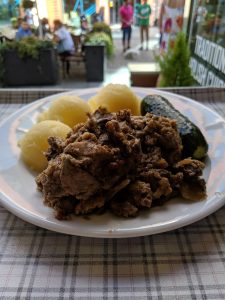 Below) This beautiful building was built in the 19th century. It is now a shopping center. Inside are all kinds of clothing, jewelry, and beauty good shops. Outside and to the right was a nice farmer’s market. It was built on the ruins of a 12th century building that has since become a museum on the basement floor. Stay classy, Poland. 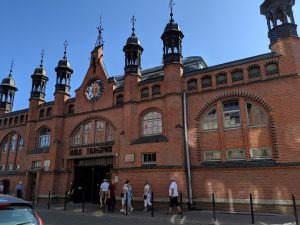 Below) Love is in the air… for giant snails in Uppsala. These are about the size of golf balls. They’re also both a pest and edible. They are everywhere. I’m considering harvesting some. 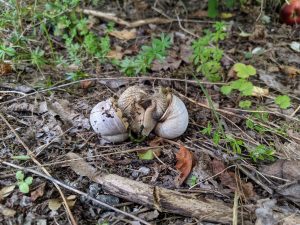 Below) Early evening in Gdansk. This was the time between when all the tourist shops closed, and all the restaurants and clubs opened. 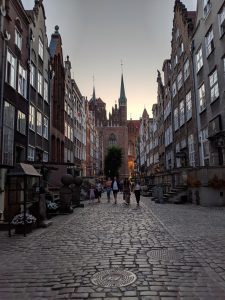 Below) One of the city gates of Gdansk. I wish I could remember which. Unfortunately, most of Gdansk was reduced to rubble during the second World War. 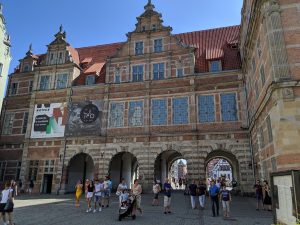 Below) These photos at the War Museum show how nuclear weapons are not needed to level a city. There is very little original architecture left but, thankfully, a lot of it was rebuilt true to the original. 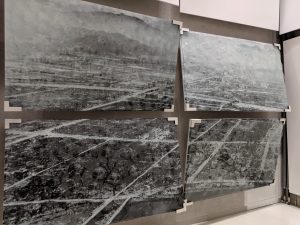 Below) A traditional delicatessen in the Latvian countryside. Unfortunately, they would not sell anything in small quantities, else I would have sampled just about everything. They only sold in blocks or in bulk. I should have indulged and simply consumed an entire chunk of smoked meat for lunch. 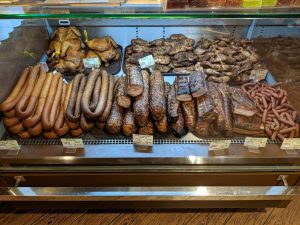 Below) Heather could be found everywhere in the Latvian countryside. 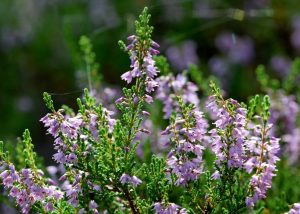 Thanks for reading, everyone.