After being in Madrid for almost a month now, I am anxiously waiting to start traveling to more countries in Europe. The first trip my friends and I have planned is to Tangier, Morocco, but in the meantime we have had time to check out some places in Spain outside of Madrid. I wanted to share this because I very wrongly assumed all the cities in Spain would be similar, when they have all turned out to be so unique.

Most tourists coming to Spain will choose to go to Madrid or Barcelona. Both of these are great cities, however, I’ve found that some of the smaller lesser known cities in Spain are just as fun and have a lot to offer!

WIP organized a day trip to Segovia last Saturday. I wasn’t exactly thrilled to go because I had never heard of Segovia and we had to be at the bus by 8:45am on one of my two precious weekend days to sleep in. After a little over an hour bus ride, we arrived in Segovia. Our bus parked at the bottom of a hill and when we got out there was an incredible view of a castle called the Alcazar. 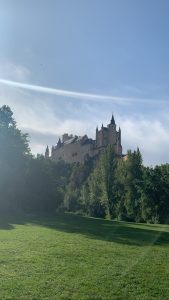 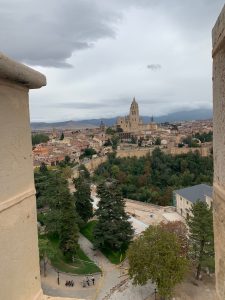 After this we went into town to see the aqueducts, tour the inside of the cathedral and then later go inside the castle! I definitely underestimated Segovia and it reminded me to keep an open mind.

My friends and I took a 4 hour bus to Valencia one weekend Friday-Sunday and stayed in an Airbnb on a canal. It felt so good to swim in the ocean and be on the beach! It was also a nice change of scenery from the city. Valencia is the birthplace of paella, so if you go be sure to get some here with fresh seafood. Toledo is a 30 minute train ride from Madrid, and is a very charming city. It was interesting to see different cultural influences (Christian, Arabic and Jewish) in the buildings. Along with cute little brick roads, there were plenty of historic buildings to go into (all either free or less than 3 euro). As a bonus, there were also adorable stray cats in the streets. 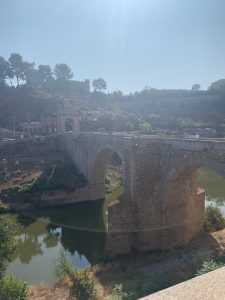 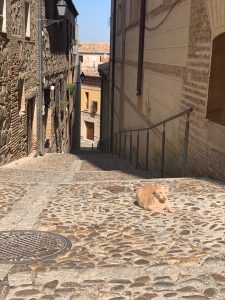 The bus ride to Cuenca was about two hours. We had no idea, but we were going to Cuenca on the city’s annual holiday, San Mateo. We got to the main city square for breakfast to find a parade going on. After breakfast, we were caught in the middle of the street when crowds of people and bulls started running through the streets! After our hectic morning we saw the “hanging houses” which are houses built into the edges of cliffs, and went on a hike to a small secluded waterfall and pool of water for swimming, shown to us by two locals we met on our walk. Cuenca was one of my favorite day trips so far because it was so spontaneous. We really had no plan and ended up seeing a lot of cool things. 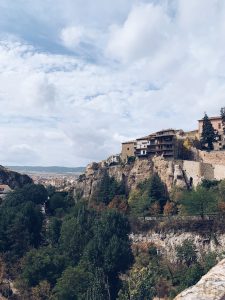