Apologizing in advance for the blurry photos.

I traveled to Stockholm today to hike around one of the islands on the archipelago. Yes, I could have hiked around the forests near where I live, but I wanted to test my ability to use the train and bus systems. Also, I wanted to spend more time in Stockholm while classes permit. My stats class starts in 2 weeks and the schedule is very intense. Anticipating a demanding schedule, coupled with the difficulty I generally have with mathematics, I was afraid I might not be able to afford the time to visit Stockholm again before snow falls. A “get it in while one can” tactic.

Last weekend — the 14th and 15th — was the most popular weekend for harvesting wild edibles in this region. I thought I would try my hand at it while there were not so many people scouring the land. In addition, of course, to just enjoying some time outside.

Sweden has a law that permits people to commune with nature and harvest wild edibles, on public or even private land, provided they are a not damaging the personal possessions of the landowner. For example: I am permitted to venture onto someone’s land to harvest wild strawberries or oyster mushrooms growing from a tree stump, but I am not permitted to harvest from fruits and vegetables which the owner has planted. This seems a very generous, open-minded, and public-serving policy when contrasted with the American tendency to shoot trespassers no matter their intention. Don’t believe me? Just do a search for “trespassers shot, killed” to find out how common it is… and how eager some Americans are to kill someone for something as innocuous as mistaking one address for another. A phenomenon that, not coincidentally, seems to increase in frequency the more rural and/or Southern one travels- sorry. Not the point. Not the venue.

Anyhow… I looked at a satellite map for a large wooded area away from human structures, took a bus to a stop outside of the city, and simply walked into the woods (below). It was lovely. 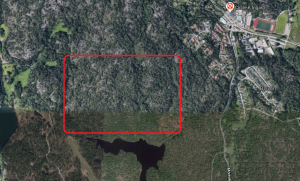 This area is mostly Taiga, but has a few deciduous trees dotting the landscape (mostly white oak, birch, and elm). The surface is almost entirely solid rock, beautifully carved from the last ice age. If ever you get lost (and you don’t know how to tell direction from the position of the sun alone) you can get at least some small idea by looking at the sour marks on the rockface; they mostly run longitudinally. 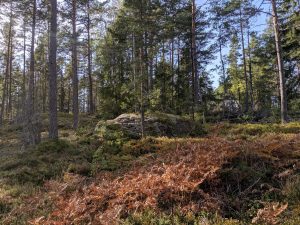 This area has no soil! Well, none to speak of, not really. I do not think it has the required horizons to be considered anything other than an inceptisol. Not enough time has passed since the last glaciation to form distinctive layers. The lumbering ice sheets that once crept their way towards the equator, I am guessing, likely bulldozed the preexisting soil into the sea. They left little behind but solid rock. The forest floor, as it presently exists, is just a thin layer of detritus, pebbles, and moss that has accumulated over the past few thousand years. As a result, the trees here don’t seem to grow very large. When a red pine, for example, grows too large for the substrate to support it, it topples. The splayed root system shows how, for the tree’s relatively-short life of only several decades, it was anchored to nothing more than skull-sized rocks, clumps of dead moss, and the soft, rotten woody “bones” of its ancestors. It is quite remarkable. Even hearty trees like the white oak and scots pine live fast and die young in this forest.

It also made for an interesting, unpredictable hike. One moment you would be walking on one immense solid rock and then, when you step off it, the ground beneath you gives way by as much as 24 centimeters. While I was never in danger of being inconvenienced by a foot stuck in the moss, secure footing was an issue for one brief moment. I took a small-but-painful tumble when the desiccated lichen on the giant boulder beneath me crumbled away. No, I will not provide you with a photo of the resulting giant bruise on my buttocks.

What does all this “eco-nerd” stuff really mean? Many things! First, a summary:

Water accumulates in large depressions on and between solid rock. The topography allows for cool air and water flow between tall rocks and ridges. There is a lot of aspect variation (the direction which slopes face) resulting in a dramatic difference in insolation over just a few meters. Plants, bushes, and shrubs which require deeper and/or well-developed soil horizons do poorly in this environment, therefore it makes sense that the understory is mostly ferns, mosses, and angiosperms in the Vaccinium genus family (below).

If someone out there sees errors in my plebeian analysis, please contact me. I would rather be embarrassed and correct than confident in a mistake. 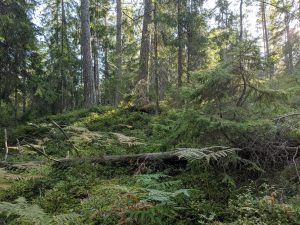 Getting back to what this all means… Mushrooms and berries, and having a better idea of where to find them! Well, the berries were not so difficult to find. Members of Vaccinium grew everywhere. I collected a cup full of what we call bilberries in the US. Here they are known as blueberries. I also collected some lingonberries (below). Rose hip and rowanberry can be found everywhere, but I only bothered with sampling them in the forest. 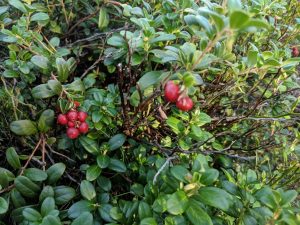 I also saw what we call blackthorn or sloe (or sloan) berries in the US which, here, are called blueberries. These are the same berries used to make sloe gin. Since I have arrived in Europe, I have come to appreciate scientific naming conventions even more. See my entry titled “My Vacation ‘Prior’ to the Program” for more insight into this. 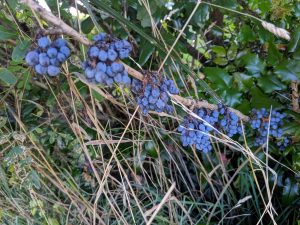 The mushrooms, however, were a bit of a challenge. I was probably being too cautious in my selection criteria for mushrooms, as many of the species found around here are identical, or very closely related to, edible species found in Wisconsin. Differences across large spatial scales (continents), and over evolutionary periods of time, however, must be considered. Mistakes in phenotypic similarities between different species should be avoided. Agaricus bisporus (white button mushroom), for example, could be confused for Amanita bisporigera (below) if you don’t scrutinize the slope of the cap. 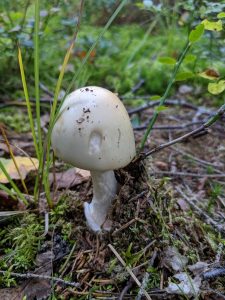 Had I mistaken the latter for the former, I would have been dead before I reached the hospital. I frequently spotted the iconic and also-deadly Amanita muscaria (Fly amanita, below), and Amanita virosa (Destroying angel, second below) were also found. I refused to touch any of them as, while unlikely to kill a young, virile man like myself (cue laugh track), I would have still run the risk of falling ill. 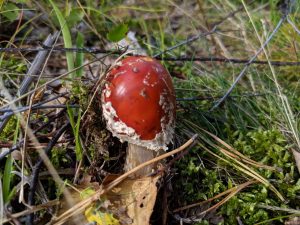 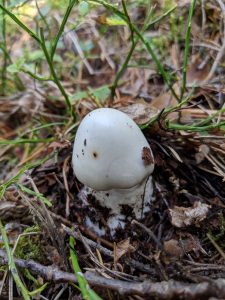 I was fortunate enough to find a large quantity of Suillus variegatus (Velvet bolete, below). The two largest of which I found next to a trail only a few meters from the highway. I was able to spot them beneath a brush pile, hidden from scouring eyes the previous weekend. Though not uncommon, young boletes could easily be mistaken for Amanita phalloides (Death cap, second below). As the name implies, this also would have been a fatal error. 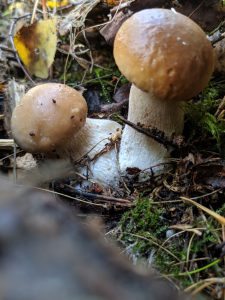 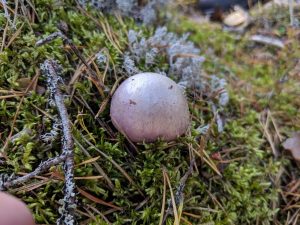 I was fortunate enough to find some Cantharellus cibarius (Golden chanterelles, below) and some species of trumpet mushrooms, the latter which I did not take because of their alleged rarity. I also forgot to take a photo. 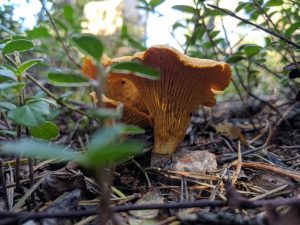 I saw several Lycoperdon perlatum (common puffball) which were beyond harvesting. I forgot to take photos of them as well. The only other edible mushroom I had seen — in Uppsala and not on this particular expedition — is a singular Calvatia gigantea (Giant puffball, below). It was fairly picked over by insects. While I could have harvested parts of it, I decided to let it spore. 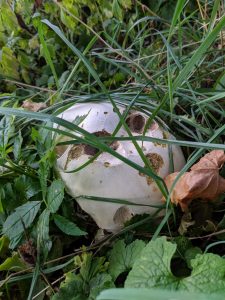 I saw numerous other fascinating fungi on this trek. I saw two beautiful examples of a coral fungus (first and second below). While they are usually edible, I left them for their beauty, rarity, and being difficult to identify. Others I simply avoided because of aposematic coloration (red, pink, purple-ish). I avoided the more abundant species simply because, since harvesting was so heavy the weekend before, it was safe to assume they were not edible. See photos of random fungi below. 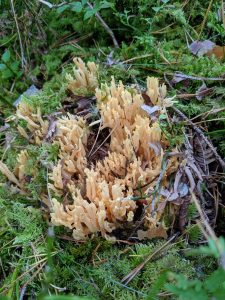 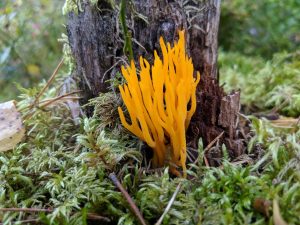 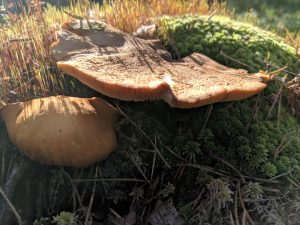 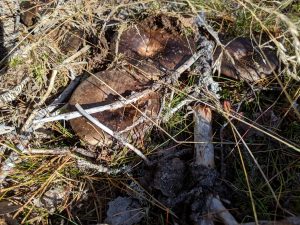 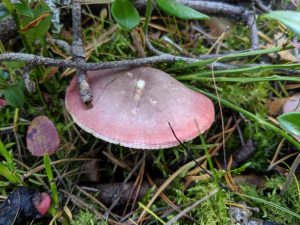 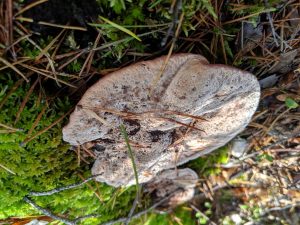 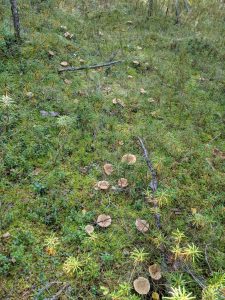 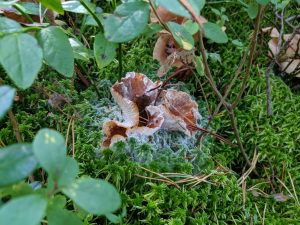 Other highlights of the day include almost catching a snake (likely a Coronella austriaca) and getting to see a cow moose! Sadly, I was not able to catch the moose, either.

I finally made it back home around 20:00 and, after spending so many hours walking the woods, I was tired and hungry… but I still had work to do. I only brought home a few chanterelles for myself, which I promptly cleaned (below), fried in butter, and ate with a pinch of salt. 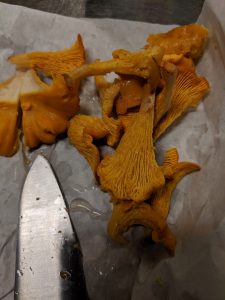 These were a nice appetizer while my sauce was reducing on the range top. “What sauce?” The one I made from the lingonberries I harvested: honey, lemon juice, ginger, black pepper, crushed lingonberries. It did not look appetizing at all when I first put all the ingredients in the saucepan (below), but the color really came out after cooking for a while. 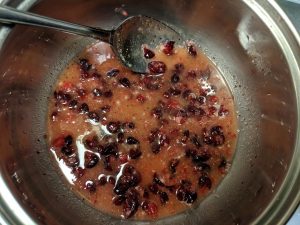 I broiled a chicken breast in the oven and poured my sauce over the top. Aside from having put in too much ginger, it was pretty good (below). I fixed myself a small salad onto which I tossed some hazelnuts I harvested and some of the bilberries (blueberries, bilbobagginsberries, blooberbees, whateverthehell they are) I found in the woods. 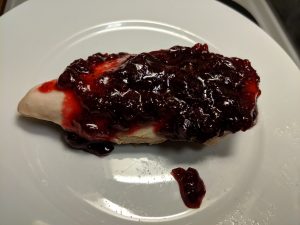 Since lingonberries grow just about everywhere, I think I will forage for more this week and try my sauce with less ginger. I think it might be nice with the addition of just a little orange zest.

I suppose I should get some sleep. I am experiencing some strangeness. My stomach is in terrible pain, my eyes are bleeding, the walls seem to be melting, my neighbor’s cat is telepathically telling me to murder the queen of Spain, and all the colors in my apartment are screaming at Wednesday. Hmmm… maybe I didn’t properly identify the mushrooms I ate. Thanks for reading.

1 thought on “Getting in Touch With My Inner Child-of-Nature.”