It’s official. Paris, France. The “city of love”. I am unbelievably excited and overwhelmed. There were/are so many things to do before I go. Doctors to see, forms to fill out, plane tickets to purchase, packing lists to write and then shorten to a more reasonable load, and friends and family to bid “au revoir” to. Every time I accomplish something related to the trip; it feels like it’s going to happen the next day. Of course, Paris isn’t perfect… My roommate keeps sending me articles about the strikes against the government retirement reform. The metro is getting shut down and violence has ensued with protestors throwing stones and police fighting back with tear gas. To make matters even more interesting, one of the main strike locations is a convenient 15-minute walk from my future apartment.

What’s not-so-great about travelling so far for so long?

The most challenging aspects of preparing for this trip are without a doubt the anticipation of having to say goodbye to loved ones for a significant amount of time as well as having to pack a little as possible to survive. Considering I am the girl who showed up on move-in day with a completely filled mini-van as well as a half-filled car, I’m having a hard time differentiating what I absolutely must bring with what I think I might need but could get in France.

Why is it so hard to pack? 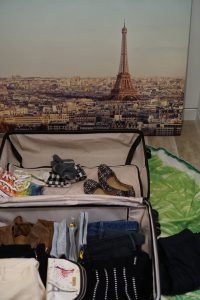 I’m struggling to narrow down the largest item I plan on bringing; my shoes. I initially wrote down that I was going to bring 6 pairs (for different occasions) until I realized that I need to narrow it down to maximum 4 pairs if I want to have the space in my one suitcase, one carry-on and small travel-safe (apparently stealing is a lot more common in Paris?) backpack. Furthermore, there are odd considerations that must be made that I didn’t realize I was going to need. For example, what I plan on doing regarding my cellphone: I must decide whether I’m going to buy a new sim card there or look at an outrageously priced international plan. Not only that, but I’ve been informed at my orientation that the heating in the apartment building I will be living in is poor, so I must be prepared with layers to sleep in. I’ve referenced websites and other blogs as well as filed my way through Pinterest and I’ve concluded that black will be my best friend when dressing there. It’s easy to keep cleaner (or at least harder to detect that its dirty) and it’s fashionable.

The other major issue I’m having pre-departure is that I have so much I want to see, and I’m extremely limited monetarily by what I can reasonably do. Initially, I made a beautiful list of every single country I wanted to see in western Europe (about 90% of them) and then I looked at the amount of time I had to spare when I didn’t have class as well as the cost of flights or trains and youth hostels. After much deliberating, I’ve narrowed it down to only visiting 7 other countries (besides France) on weekends based upon where I have the most desire to go. The finalized list consisted of Spain, Italy, England, Ireland, Croatia, Germany, and Switzerland.

Regardless of the stresses of packing, the never-ending bucket list, and the current strikes, I cannot wait because this Wisconsin girl is going out of the country for the very first time in her life in less than 2 months!!!