Journey at the airport
After living here in Paris for a little less than a week, overwhelming is the perfect summation of this experience thus far. I’ve never left the country before so the moment I entered O’Hare; I was flustered. I weighed my bag on the scale at the airport and it was 49.5 pounds. The limit was 50. Whew. Note to future travelers: weigh your bag at home so you don’t get any surprises or find yourself repacking your bag in a crowded airport. The flight itself was uneventful, but the arrival into CDG (Charles de Gaulle) was nothing short of exciting. Megan (my roommate/travel buddy) and I got off the plane and were immediately thrust into a large mob of people; most of whom were speaking French. I had no clue where I was going so I just followed everyone else until I saw the baggage claim sign. At one point, I lost track of it, so I turned around, went the wrong direction for embarrassingly long, and eventually found myself at the end of the line for customs. Somehow, perhaps at a pace some would call snail-like, we made it to our taxi and then had a quick uneventful ride to the Airbnb.

The Airbnb
The place we stayed at for our first two nights was a typical Parisian apartment, and it was very nice, minus a few details we should have expected. First, there was no elevator and the apartment was on the 6th floor up a narrow spiral staircase. This I found to be a true testament to my muscular ability, which I hate to admit was found to be severely lacking. Secondly, the bathroom was so small that in order to use the toilet, one must turn one’s knees sideways otherwise they would be halfway through the door. However, the Airbnb was located a block and a half away from the Notre Dame as well as the famous Shakespeare and Co bookstore. Not to mention, the Louvre was a 20-minute walk away. Overall, a perfect location for the first taste of Paris. 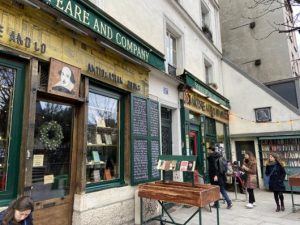 Initial explorations
In order to avoid prolonging the symptoms of the dreaded jet lag, we set our bags down in the Airbnb and then almost immediately set off to explore the city until we made it until at least 7 pm (we had gotten around 3 hours of sleep in the past 24+ hour period). This was a great plan because we were so enthralled by the wonderful new sites around us that we were distracted from our fatigue. I was told by multiple sources to keep my passport on me when out and about as well as to be wary of pickpockets whom run rampant throughout the congested tourist areas of Paris; both of which are good advice. The second day, Megan and I decided to explore the city again, but set off in the opposite direction as the day before. We wound up at a café located near and dwarfed by the Louvre museum. This was my first experience with an unpleasant French waiter. As soon as he saw us reading the menu on the window, he ushered us to a seat, pretty much giving us no choice but to follow. Luckily, we had just decided we were going to eat there anyway. After that, however, we overheard him loudly talking about the people who just left and had been sitting next to us. He was claiming that he did not like the English because they never tip, and he loved Americans (obviously referring to us) because we always tipped well. Keep in mind, in French culture, tipping is NOT expected. Waiters earn a salary and are not dependent on tips for their pay. The man was openly rude about other customers as well, and it made me miss America’s overly perky and attentive waiters and waitresses for a brief second. However, I have not come across another as rude as he. After that, we walked to the Eiffel Tower because we are in Paris and we must see the Eiffel Tower. It is a beautiful building, however, I felt as though that no matter what angle or location I was taking a picture from, I had already seen that angle in someone else’s photograph. That was a bit disappointing, but the monument itself was not. I have yet to go up into it, but I have some time to do so. 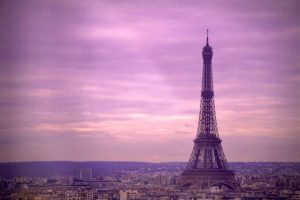 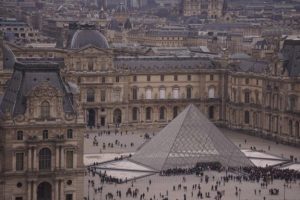 CIEE orientations and moving into the new apartment
We moved into our apartment today, they placed students randomly throughout the districts in Paris, I wound up in the 12th, which is an hour and 20-minute walk to classes, but a 28-minute metro commute. Unfortunately, with the strikes, the metros were only running during rush hours and were uncomfortably packed. I never empathized more with a sardine. Our apartment, albeit far, is surprisingly and wonderfully spacious; furnished head to toe with IKEA products for organizing possessions. Orientations for this program occurred over a period of 3 days, with classes occurring halfway through the 3rd. The first day at the global institute was mainly introductions to what the program is about, and we learned that there were just over 150 students in the program, 30 from Madison. The second and third day were mainly logistics about the rest of the program. The way classes work in this program is that they are in 3-hour blocks 2-3 times per week for 6 weeks. I am taking a French thought class in French and was extremely concerned about my level of the French language being insufficient. When I walked into class, there were only 6 other people and the professor. I believe that after completing French 271 at Madison I was prepared enough and could manage taking this class if I put in a lot of work, especially regarding my writing and giving myself time to read.

Almost comfortable
After this first week here, I know that I am super excited and thankful for this opportunity, but I also know that I will be happy when we leave on weekend trips to smaller towns. I’m a live in the country, visit the city kind of person. My main issue is the lack of space and air quality. The air quality in this city is worse than I was expecting due to the ridiculous number of Parisians young and old who partake in the smoking epidemic. I am, however, pleased to announce that the drinking water here is from the tap and tastes wonderful; it’s something the Parisians boast about. I can’t wait to see what the next 12 weeks have in store for me! 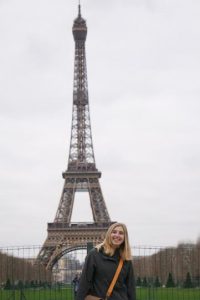