AKA: The rule Megan came up with when she discovered that we were succumbing to the obligations of homework and classes and forgetting to go out and have fun during the week.

A Note on the Strikes

For over a month, Paris has been striking. It is officially the longest strike in history. I think it’s awesome to be here during a historical moment like that, but it has also made getting around the city a million times harder with the metro and other public transportation being less accessible. It’s stopped us from staying out past rush hour because we couldn’t get back any other way from classes. Recently, there has been a huge improvement in the public transit, but there is still more to go. I just keep thinking that these people must be very passionate about their fight for their pension in order to be sacrificing over a month’s worth of pay.

An alarm going off at 06h00 is never a pleasant wake up call. It was subdued, however, by the promise of adventure we had planned for the day. Our destination was Mont Saint-Michel and all we needed to do to get there was take 2 public buses, one train, and a coach bus. No problem, right? With the strikes, the metros weren’t running normally so the simpler plan of taking one metro straight to the Gare Montparnasse was not an option. Instead, we found ourselves sprinting to make it to the first public bus 3 blocks from our apartment. Turns out we didn’t need to run as it was a little late, but my adrenaline was already going for the day. That bus got us halfway to the train station and then we had to sprint again to the next connecting bus stop that would take us the rest of the way. We made it with seconds to spare. Unfortunately, once we arrived at the train station, it was 07h28 and our train left at 07h40. Having never been in the train station before, there was an embarrassing amount of frantic running around until we found our train 6 minutes before it left. However, we still had to get our Eurail passes dated and stamped before the first use. I’ve honestly never seen anyone take so long to count three months from now in their head before. We ran back to the train and must’ve earned the sympathy of the guy at the gate because our tickets weren’t scanning so he just let us through. We hopped onto the first open door we saw, the policeman blew the whistle, then the doors all shut. At first, we panicked that we weren’t on the right train and debated trying to open the door right before it started moving, but we figured that even if we wound up somewhere else, we’d just explore there. Luckily, we were on the right train, however we spent most of the ride in the sleeper car which was not our seat. We had another sprint session from the train station in Rennes to the bus station where we finally got onto our last vehicle to get us to Mont Saint-Michael. After all of that travelling mess, I can without a doubt say that it was worth it to see what we saw. The country in Normandy is basically the Wisconsin of France so it felt like home, but this beautiful abbey was artfully perched on top of this island and a beautiful city was built around it. The original base of the abbey was built in the year 708 and the stone used to build it and the rest of the town around it was taken from an island a little further out in the water. The island had withstood war and years of weathering and it was an amazing sight to visit. Wonderful to get a breath of fresh air in the country. 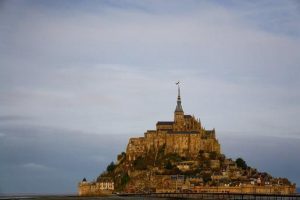 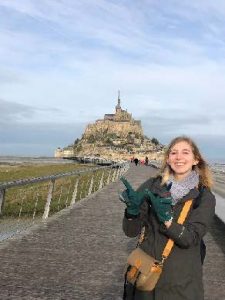 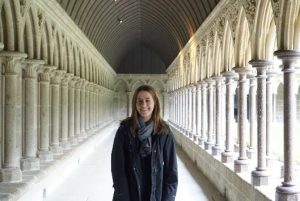 From left to right: Mont-Saint-Michel from a distance. A good old Wisconsin sign from myself. Megan in the abbey on top of the hill.

School Week Adventures
This week was only 4 days of classes so that was pretty darn wonderful. On Monday, we visited the part of Paris called Montmartre. It’s known for hosting the Sacre-Coeur, but also the red-light district (Moulin Rouge, anybody?). We visited both sites on a slightly disappointingly cloudy day but were able to sufficiently check off a new thing that we did that day. After that, I had my first session of contemporary French thought for the week, a 3-hour course that meets 2-3 times a week. Tuesday morning and afternoon were taken up by classes. My session for the UW specific class called Black Paris meets twice a week for an hour and a half each time. We actually were referencing Montmartre during class a lot because that just happens to be the hip and happening area of black culture (jazz clubs, shows) during Paris in the 1920’s. After class, Megan and I went home and ate a quick dinner but then set off to Bercy Village in the 12th arrondissement in search of some famous cheesecake (Factory and Co.). We were not disappointed in the beautiful little street filled with cafés, shops, and even a movie theater. Wednesday’s adventure before class was all about nature. We went to the Bois de Vincennes which is these large “woods” in Paris. It was obviously not comparable to any woods back home in Wisconsin, but substantial for one in a city. We walked around and had a picnic in the park. I tried to read some of my Sherlock Holmes book, but cloudy, 45, and windy doesn’t really make for the best reading in the park weather. Thursday was filled mainly with homework (as was every other moment in-between all the above-mentioned adventures) but we did manage to have the best pastry I’ve had thus far on the trip. It was swiss chocolate chip bread with some sort of vanilla crème in the middle and it was perfect. I’ve been talking about my fun adventures, but I do want to make clear that the classes in this program are not easy and take up a significant amount of free time with various readings, essays, and other assignments. I easily spend 3-4 hours a day working on said homework. Also, to briefly talk about the neighborhood where my apartment is; it’s still very city-like, but also feels somehow separate from Paris. It’s not close to any of the main monuments, but it does have all the necessary things to live like a grocery store and some boulangeries. Another concrete jungle but with architecture from the 70s or 80s so it’s much less pretty. However, we did end up with a larger apartment because it was further away ad that was the trade-off between the CIEE apartments. You’re either close to the city with a crappy apartment, or further from it with some space and comfort. 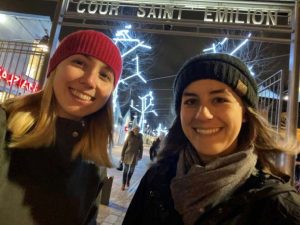 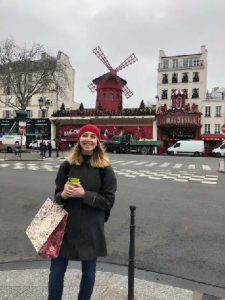 From left to right: Megan and me at Bercy village. Me standing in front of the Moulin Rouge.

La compagne (the country) was the first block weekend trip through CIEE. We set off early Friday morning via bus. The trip took around 4 hours including the rest stop in the middle. Tours is not the country. I was expecting a small cobblestone town with some old 17th century homes. There was one street like this, but the rest of it has been modernized. Which is nice, but it just felt like a slightly shorter and smaller version of Paris. CIEE arranged a tour of the city for us which one could take in either French or English. The highlight of the tour was a beautiful gothic cathedral in the middle of the city. The evening we were left to do as we please and Megan and I met up with a larger group mainly composed of my French class for dinner at an Italian place. After that, we all went and got dessert and coffee somewhere else. A note on the general restaurant culture in France; servers expect you to sit and eat or drink your tiny coffee or pastry for a long time. No one just grabs a drink and chugs it then moves on. It seems there’s meant to be an element of contemplation surrounding time at a café or restaurant. The second day in Tours, Megan and I got up bright and early for our 7 am continental breakfast (mini pastries, eggs, bread, cheeses, and meats). We sauntered in 5 minutes early and were the first ones there. Apparently, no one else is an early bird like we are. The event that I chose to go to today was the musée des beaux arts (museum of fine arts) which housed a painting by Rembrandt as well as Monet. After that, I walked around with Megan and someone else and we found ourselves at the botanical garden which also had a small zoo. Last night, we went to a wine bar because the country surrounding Tours is well-known for its vineyards. Today, was another adventure, we went to the Chateau de Chambord. It had amazing views and I got to take so many wonderful pictures. Lunch was also a treat, we had every wonderful food under the sun including brie, and French bread, and chicken, and an apple tart, and a bean salad. Can’t wait to see what next week has in store. 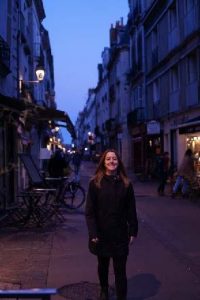 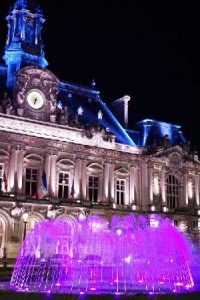 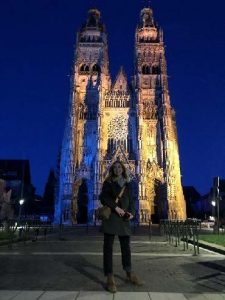 From left to right: Megan walking on a street in Tours. The Hôtel de Ville in Tours. Me in front of the Cathédral in Tours. 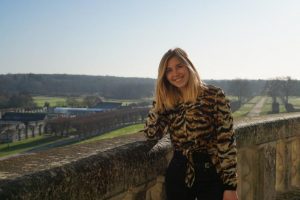 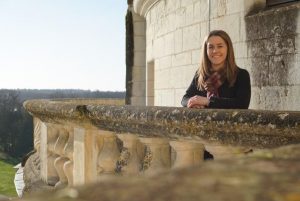 Me and Megan on top of the castle. 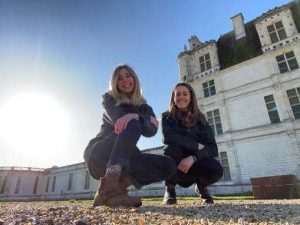 Megan and me posing in the gardens behind the castle.