Here I am, in Florence, Italy, finally writing this blog entry because my feet are sore from a week of adventures and the wi-fi has disconnected. It hasn’t been two weeks yet since my plane departed the Chicago airport, and already so much has happened and changed.

Within a long, (mostly) sleepless period of 36 hours or so, my friend and I made our way from Milwaukee to Florence through a series of planes, trains, and automobiles. The travel, a long and confusing process, consisted of driving to Chicago, flying from there to London and then to Bologna, taking a train to Florence and finally a taxi (as well as many flights of dark stairs) to our apartment. Thankfully, we managed to end up in our destination with time to spare. 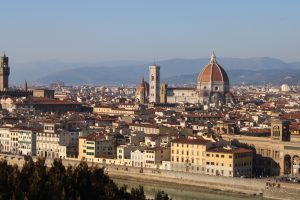 The first moments in Florence were strange. It felt unreal to finally arrive in Italy, and the bright Tuscan sun distracted me from my lack of sleep; regardless, I was still tired, jetlagged, and disoriented. I didn’t have the time or energy to scope out the iconic sights I had seen in pictures and read about, so the city was completely unfamiliar. After meeting my roommates and unpacking all of the possessions I’d brought with me, we decided to run some errands: buying groceries and securing an Italian SIM card.

The SIM card process was successful eventually, but the store moved slowly, and I had difficulties getting the plan to work with my phone. At the grocery store, a woman cut in front of me and speaking to me in fast Italian; I still have no idea what occurred or whether I did something wrong. With different foods and everything in a foreign language, I couldn’t find some of the foods that were staples in my diet at home. And despite the tiring days, the jet lag prevented me from feeling rested the next morning. 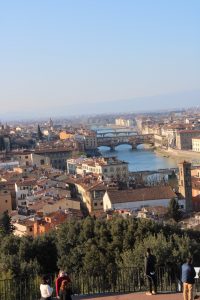 The biggest struggle of the next day was staying awake during orientation. After the day was finished, I took a nap in preparation for the school’s Welcome Gala that night. There, I began to feel better after I ate a buffet of good food and met some new friends.

On Saturday I slept in until I was completely rested. I took the day to finally venture into the historical city center. I didn’t have data working yet on my phone and I forgot to bring a map, so I simply followed the narrow streets toward the Duomo, which towers above the rest of the rooftops. From there (after photographing every angle of the church), I made my way in the direction of the Arno river. I stumbled onto a bridge with a beautiful view of the iconic Ponte Vecchio, before crossing the river and wandering around. I followed signs to the Piazzale Michelangelo, a hillside square with a panoramic view of the city. I explored the area, too, discovering a beautiful church and cemetery above the Piazzale. 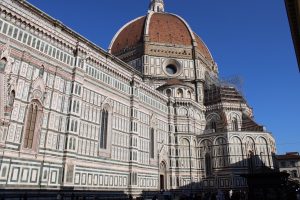 Finally, as the afternoon grew colder, I meandered back towards my apartment. This was more difficult without a map, but I found the way eventually. Along the way, I discovered a few helpful shops as well as 99¢ stores. These are similar to American dollar stores, but they seem to be on every corner in Florence, and they’ve been perfect for cheaply purchasing many of the items I couldn’t bring with me for my months abroad.

The following day I retraced my steps, this time with the company of friends. We dined on a delicious truffle ravioli after watching the sunset over Florence from the Piazzale. 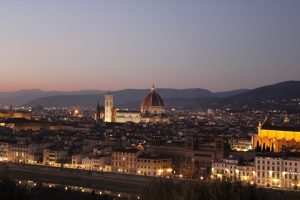 Orientation filled the following week. We took a crash course in Italian, did practical walking tours of the city, and spent 2.5 hours waiting in an Italian post office to complete our paperwork. During this week, I also began to figure out day-to-day life in Florence: where I would buy groceries (Conad or Pam Local, if you’re taking notes), where I could affordably eat out (so many little cafés), how to use the washing machine in our apartment (the instruction manual helped after a few failed attempts), how to cook without a microwave.

I saw a lot of the city that week. I began to tell the difference between one piazza and the next, recognize street names, navigate to stores without using a map or GPS. With so much to see, it felt wrong to spend my free time doing anything other than exploring; however, I would encourage future study abroad students to not feel bad about taking a break. After spending so much time on my feet and making new friends, I needed to take time to call my family and friends back home, cook an easy dinner at my apartment, or see what Italian Netflix had to offer.

On Friday morning we departed for a weekend in Turin, a beautiful city bordering France in northern Italy. The city’s wide boulevards, open green spaces, and pastel-colored buildings stood in contrast to the narrow, winding, sometimes-chaotic streets of Florence. It felt closer to Paris than to the Tuscan town I’d grown accustomed to, giving us a taste of Italy’s diverse cultures. 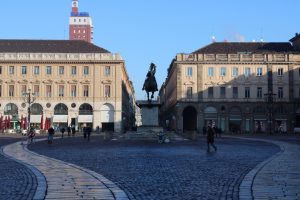 We spent three days touring museums and palaces, gazing at the French Alps between Turin’s refined buildings, and consuming the city’s famous hazelnut chocolate. Although the city was beautiful, by the end of the weekend, I was ready to start classes and establish a routine back in Florence. 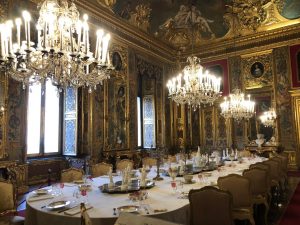 I enjoyed every minute of touring Turin (and I would recommend for anyone to visit it), but perhaps the best part was coming back. After a long day of sight-seeing and transportation, which included a stopover in the chilly Milan train station, we pulled into Florence. I left the familiar station, navigating easily back to my apartment, up the many stairs, into the bed I would call my own for the next four months.

And after that weekend in an unfamiliar city, coming back to Florence felt a little more like coming home. 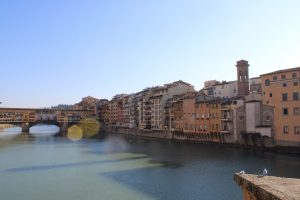